With the value of Bitcoin now in flux and expanding to virtually every corner of the globe, advocates of the digital currency have now turned their sights to Washington in an attempt to entrench and press their interests on Capitol Hill.

Bitcoin advocates faced myriad hurdles over the following year with the lingering specter of a federal criminal investigation hanging over the currency. This included a brush with the U.S. Treasury Department’s Financial Crimes Enforcement Act (FINCEN).

Victory? FINCEN Regulation Sets Framework For Legal Mining And Use Of Bitcoin

According to FINCEN Director, Jennifer Shasky Calvery in an interview last week, “Our first reaction, particularly when I was on the law enforcement side, when we had something new was ‘Huge risk! Huge risk for money laundering. It’s bad!’ However we’re the Department of the Treasury, we can’t have that knee-jerk of a response.”

Ultimately, what transpired from the investigation was a series of guidelines and clairvoyance on the slippery nature of Bitcoin itself, in essence arbitrating legal guidelines and a definitive status for the mercurial nature of the digital currency. Henceforth, the legality of Bitcoin mining was necessitated by a form of obligatory registration as Money Services Businesses (MSBs) in compliance with anti-money laundering regulatory acts – a main point of contention by regulators previously. Furthermore, generic users of Bitcoin are not required to register in this way if their dealings with the currency are for the purchase of goods and services. This was heralded as a victory for Bitcoin and helped mitigate the label it had earned as a facilitator of illicit transactions.

Bitcoin Carves Out Presence And Corner In Washington, Fostering Credibility 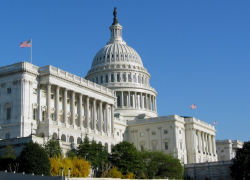 According to Marco Santori, Chairman of the Seattle-based Bitcoin foundation’s Regulatory Affair Committee, “That was the starting-gun shot of Bitcoin’s activities in Washington”, who had met with Shasky Calvery. Indeed, after a tumultuous 2013 year that saw Bitcoin shed its nefarious yolk, Bitcoin advocates can now revel at the establishment of its own foundation and industry representatives in Washington – even subject to lobbyists.

As a currency that is decentralized and without a central nexus, a singular voice for Bitcoin has been absent thus far. However, as of late on Capitol Hill, the currency has no shortage of spokespersons, including Adrian Fenty, Washington’s former mayor. Fenty is presently helping arbitrate and develop a political strategy for the currency. Furthermore, former libertarian Republican 2012 primary candidate Ron Paul has endorsed Bitcoin and many of his followers have backed the movement. The ultimate goal is to prevent outright regulation banning the use of Bitcoin, instead providing a comprehensive list of rules that put it on a level playing field – the guidelines mandated by FINCEN were an excellent step towards this aim. As recently as November, a series of Senate hearings helped lend weight to this movement.

Is Bitcoin Credibility And Growth A Double-Edged Sword?

Despite the mounting value, credibility and use of Bitcoin over the past year, many central banks and ‘established’ financial institutions have abstained from any form of counterbalancing moves. However, some lobbyists warn that as the demand and popularity of the currency expands, principally in Washington, banking and credit entities could eventually deem Bitcoin as a tangible threat, no doubt unleashing a swarm of potential issues.

“With the Senate hearings, they may have awoken a sleeping giant who is less enamored with virtual currency than they are. As with any new industry they’ll probably have to play some defense as people begin to raise questions,” commented Heather Podesta, a lobbyist seeking clients in the Bitcoin realm.

Washington Has Blueprint For Clamping Down On Bitcoin

Despite the growing optimism on Capitol Hill, not all countries have been so warm and welcoming towards the growing currency. As recently as December, the Chinese government had banned banks in the country from doing business in Bitcoins – this move was only further reiterated by a recent announcement that as of January 14, Chinese will also no longer be able to use Bitcoin as a means of payment for Taobao, China’s Ebay counterpart.

Still, the recent example of India over the past month offers some form of solace regarding the cohabitation of Bitcoin and domestic currency. Several Bitcoin exchanges were shut down last month in the country, however the government has since come out and announced it has no intention of regulating or shutting down the currency, rather the exchanges in question were in violation of Indian laws.