After shedding billions of dollars for several months, the price of Bitcoin seems to be in recovery. Although the Bitcoin ‘boom’ that took place near the end of 2017 has veritably ended, the cryptocurrency is still as popular and controversial as ever.

“There’s been a lot of buzz lately from well-known billionaires regarding the quality of this new asset class. Some have called it toxic, or even poison,” said Mati Greenspan, Senior Market Analyst at eToro, in an exclusive email to Finance Magnates. Warren Buffet commented earlier this week that Bitcoin was “rat poison.”

“To be clear,” Greenspan said, “to those who are in the top 1% of the world’s earners, it is very toxic.”

He went on to explain that BTC’s empowering qualities present a serious threat to the status quo: “Bitcoin’s inherent value is derived from people who are not lucky enough to live in countries with a stable economy or a trustworthy government.”

“A Global and Independent Form of Money”

“Yes, the short-term price movements can be highly speculative,” Greenspan continued, acknowledging the risks associated with an asset that has historically proven itself to be so volatile. “However, in the long run, Bitcoin has already proven its value as a global and independent form of money.”

Indeed, Bitcoin’s recent rapid increase in value has created a vast amount of price forecasts from both experts and analysts, with some predicting major growth of the cryptocurrency throughout 2018 and in the coming years. 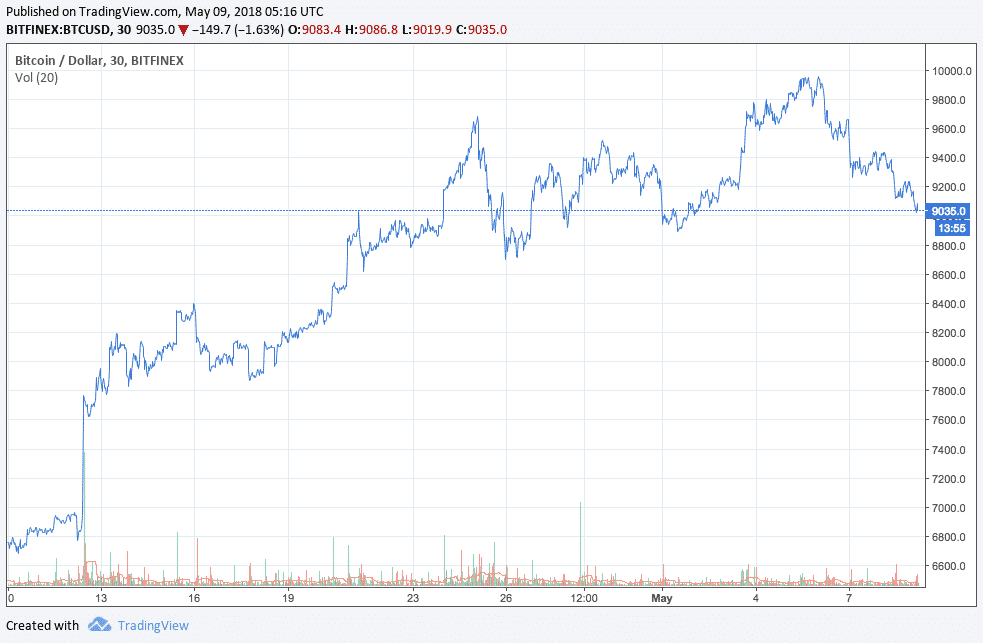 One of the bolder predictions came from billionaire investor Tim Draper, who made his vast sums of money through early investments in giant internet companies such as Twitter and Skype. Draper’s prior predictions in 2014 proved correct, as Bitcoin’s price soared from $300 to $10,000.

He even backed up this sentiment on Twitter, correcting an earlier tweet where he predicted the price to be at $25,000 in 2022:

This price momentum is also thought to be realistic by other analysts, who believe the significant price increases in April could create ripples in the market leading to optimism in investors.

Some famous individuals in the cryptocurrency sphere have been even more positive about the future of Bitcoin, with cybersecurity innovator John McAfee predicting in November 2017 that Bitcoin will hit $1 million by 2020.

Additionally, NewsBTC reported that Ronnie Moas, founder of Standpoint Research and renowned cryptocurrency ‘guru,’ predicted earlier this year that Bitcoin is on its way to the moon.

The bullish forecasts have been pushed forward by recent good news surrounding the cryptocurrency. This week, an Islamic study of cryptocurrency by Muhammad Abu-Bakar of Blossom Finance in Indonesia declared that Bitcoin was a legitimate currency and therefore considered halal under Sharia law.

“Bitcoin is permissible in principal as bitcoin is treated as valuable by market price on global exchanges and it is accepted for payment at a wide variety of merchants,” the study reads. “Moreover, many private individuals accept bitcoin as a medium of exchange in their private transactions.”

While this may not seem entirely significant on its face, self-identifying Muslims currently make up about 23 percent of the world’s population. The declaration of Bitcoin as Sharia could potentially open up the market to 1.8 billion Muslims around the world who can increase investment and help sustain recent advancements.

Not Everyone is So Optimistic

On the other hand, Michael Hartnett, a leading investment strategist at Bank of America, has made an analysis that indicates the Bitcoin bubble may already be bursting, with the recent fall of 65 percent indicating the volatile nature of the currency and what can happen in the future.

And yet it seems that in the near future at least that we can expect to see a steady rise in the price of Bitcoin, and purchasing the currency at this moment may be a good strategy.

Indeed, “Bitcoin will never crash,” said one Reddit user, “because then everyone would just buy it when it’s way cheaper.”