Circle has come out firing at Bitcoin 2014 in Amsterdam, announcing its first major solution. They will be offering a simplified way of sending, storing and receiving money, based on bitcoin transactions in the background. New sign-ups will receive a bonus of $10 in bitcoins.

The solution aims to be the most bank-like yet, a trendy theme observed with Robocoin and disgraced Neo & Bee.

There is an emphasis on reducing the “friction” for users trying to engage in Bitcoin. Until now, the “mass market” has not been able to fully embrace Bitcoin products, which seemed unfamiliar and complex. The goal here was to make it simple- a similar theme to that of bitcoinwallet.com. Circle founder Jeremy Allaire writes:

A huge theme we saw with digital currency was that an enormous amount of friction exists for the average consumer trying to acquire and use it. Whether it be products that require users to understand public key cryptography, or install and manage desktop software, or navigate user experiences oriented toward traders not retail consumers: we saw complexity everywhere.

The company distances itself from the speculative side of Bitcoin and instead markets itself for leveraging Bitcoin as a payment solution and store of value. They do not want to look like another exchange for buying and selling. They don’t even want to be the next venue to more easily buying bitcoins, such as Bittylicious.

Bitcoins are just the mode of transfer, in order for payments to be quick and easy.

Interestingly, account holders will therefore notice that Circle is going relatively light on its reference to bitcoins. Account balances and activity are expressed primarily in dollars- something which people can better relate to. As much as Bitcoiners love cryptocurrency, most will think in terms of dollars when involved with their dealings, at least in the back of their minds. 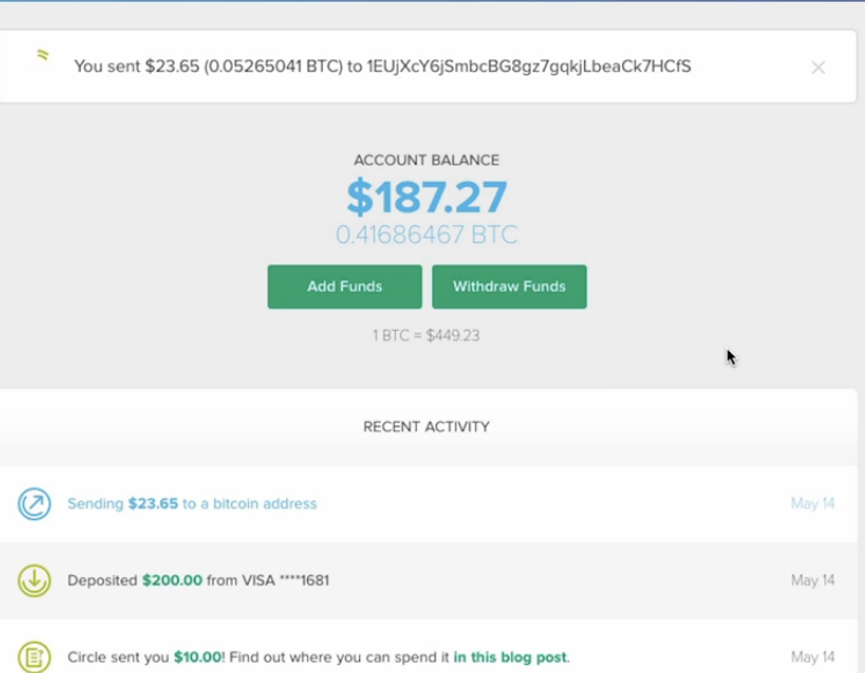 How does this stack up in terms of value versus a more established player, such as Coinbase? More experienced in the game and hosting over a million consumer wallets, Coinbase has proven itself to the market. Circle has just launched its first real product and is currently accepting clients by invite only.

Perhaps working in their favor in their claim to be insured, although details are unclear. Coinbase is not yet insured, but appears to have such plans for the future.

In addition, Circle claims to charge no fees, unlike Coinbase. It’s unclear if such fees are perhaps baked into a spread, or if there are plans to do so in the future. From the balances shown in the above screenshot, it would appear that exchanges are made at or near the going market rate.

No-fee banking in fiat has been a huge success in recent years. Banks offering the service have experienced rapid growth rates relative to their peers. If Circle is equally successful, this will give them time to think of a way to make money.