It’s no secret that Bitcoin hodlers all over the world are smiling through gritted teeth as friends, family members, and coworkers ask: “didn’t Bitcoin just lose like, a quarter of its value?”

Yes, it did. And it does – somewhat often. According to a running record of BTC obituaries on 99Bitcoins, Bitcoin has been declared “dead” 217 times, and counting. Experienced BTC hodlers will tell you that this is all par for the course, although some financial analysts are skeptical (perhaps rightfully so).

So, how did we get here this time? Let’s back up for a moment.

Crypto Markets May Have Been Overdue For a Correction

The unbelievable Bitcoin rally of the last several weeks in the wake of CME and CBOE’s adoption of Bitcoin futures trading led the coin up to nearly $20,000. Crypto markets as a whole enjoyed the run-off from the BTC boom as well as increased investor interest in its own right, bringing the crypto market cap as a whole to over half a trillion dollars for the first time – although the market cap did briefly fall by close to $4 billion less than 24 hours ago at press time. 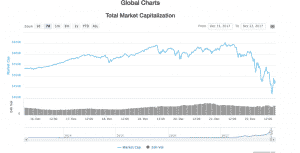 While it’s certainly an uncomfortable afternoon (to say the least) as crypto hodlers collectively and repeatedly refresh their Blockfolio apps, watching percentages fall gracefully – or perhaps, not-so-gracefully – down 10… 20, erm… 30 percent, the truth is that a correction for BTC and the crypto markets may well have been past-due.

Dave Chapman, managing director of Octagon Strategy, said: “A correction like we are witnessing today is hardly surprising” in the wake of the recent rally. In addition to the recent adoption of Bitcoin futures trading on CME and CBOE, thousands of new investors entered the BTC markets within the last several weeks.

In early November, the Coinbase app reportedly added 100,000 new trading accounts in less than 24 hours. It’s certainly possible that inexperienced investors who are unfamiliar with BTC’s volatility could be engaging in panic-selling as the value of BTC drops, further contributing to the spiral. 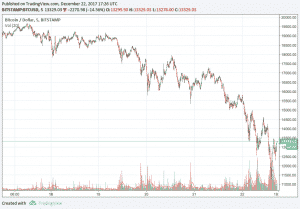 Fortune reported that the recent drop could also be attributed in part to market manipulation. Ross Norman, CEO of Sharps Pixley, said: “The sharks are beginning to circle here, and the futures markets may give them a venue to strike. Bitcoin’s been heavily driven by retail investors, but there’ll be some aggressive funds looking for the right opportunity to hammer this thing lower.”

Altcoins have not survived the last week unscathed either, as the market as a whole has shed roughly $100 billion within 24 hours. 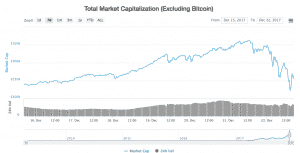 The rapid drop in the crypto market could also be partially attributed to “market contagion”, according to founder and principle market strategist at RW Market Advisory, Ron William. William told CNBC: “[BTC] Price is extremely irrational. And now it is looking — if we continue lower — that this could be a broader contagion story for the other markets.”

If investors can manage to treat the recent price drop as an opportunity to pick up more BTC tokens, the markets may see a recovery beginning within the next several days. However, there is a possibility that some time will pass before BTC regains the highs that it reached earlier this month.

And, of course, in the wake of the recent death-drop, the popular BTC trading app Coinbase has announced an outage. One reddit user referred to the app as a sort of “child lock for adults” who may be “emotionally” buying and selling BTC.

Despite the adrenaline-filled highs and lows of BTC buying and selling, however, crypto trading is not a game. Real people risk real money to invest in the coin; reportedly, some have even taken out mortgages on their homes to put money into crypto.

Of course, there is nothing that can really be done to abet the risks involved with investing in cryptocurrency once the deed has already been done. Hopefully, investors have not put in more than they can afford to lose, although some certainly have. For those investors looking to get in on crypto for the first time, it’s best to use this latest haircut (and the aftermath) as a learning opportunity.

For those who are in already – whether or not to hodl on to your coins? Your guess is as good as mine, but history may be the best indicator of the future.