Although it’s true that most millennials have never interacted with Bitcoin directly, it does make sense that a generation that is largely distrustful of governments and other kinds of large institutions would be interested in a financial instrument that is so far out of governmental reach.

After all, it was just last week that CNBC reported that the United States government’s social security system is headed for insolvency by 2035–in other words, US citizens who have been paying into the country’s pension system won’t be able to receive the benefits they’ve been promised in just 16 years (unless something serious changes.)

Additionally, the very concept of “retirement” for most millennials is quite different from what Gen Xers and Baby Boomers may perceive it to be. “According to some reports, many people under 40 believe they will never retire,” said. Morgan Steckler, cryptocurrency retirement fund expert and CSO of iTrust Capital, in an email to Finance Magnates.

“If these assets have the [same potential for profits that] they have shown over the past number of years–the fall in prices included–it could still lead to life-changing returns and give those people that option to retire if they so choose.”

Therefore, using Bitcoin and cryptocurrencies as potential long-term investments for retirement–as ridiculous as it may seem to some–may not be such a bad idea after all.

But is this even possible?

Volatility Could Be an Advantage

The answer is yes–and according to Evercoin exchange founder Miko Matsumura, crypto-based assets are strongly appealing to older individuals in certain parts of the world. “Japan, as the first country to legalize bitcoin, is a great example of how the aging population is diversifying into cryptographic assets to hedge against currency devaluation and trade imbalances,” he told Finance Magnates in an email.

Matsumura added that indeed, cryptographic assets could be an excellent solution for anyone who has a ‘checkbook IRA’ because of their “potential to increase (and decrease) in value so dramatically.”

(TL;DR: an IRA, or Individual Retirement Account, is defined as “a form of ‘individual retirement plan,’ provided by many financial institutions, that provides tax advantages for retirement savings in the United States. A “checkbook IRA” is an account that holds a single asset: an LLC. Who is the manager of this LLC? You. The LLC can then own assets as its owner sees fit. Consult with an expert before attempting this yourself.)

“So if you have an asset [that] you believe in long-term that is very cheap today, you can park a small amount into a self-directed IRA vehicle and when you retire, take out the large sum without tax penalties,” he explained. “This solution would best benefit from a diversified basket of assets that were all fundamentally sound in terms of their long-term value.”

In other words, crypto assets could be a great addition for anyone who regularly cashes in and out of some of their retirement assets–hodlers could buy their crypto assets low and sell them high, which could potentially add some serious cash to one’s retirement fund.

Indeed, “Cryptocurrency and blockchain is in its infancy,” Steckler said. Therefore, “this is a much more aggressive part of a retirement account when compared to stocks/bonds, real estate, annuities, etc.” 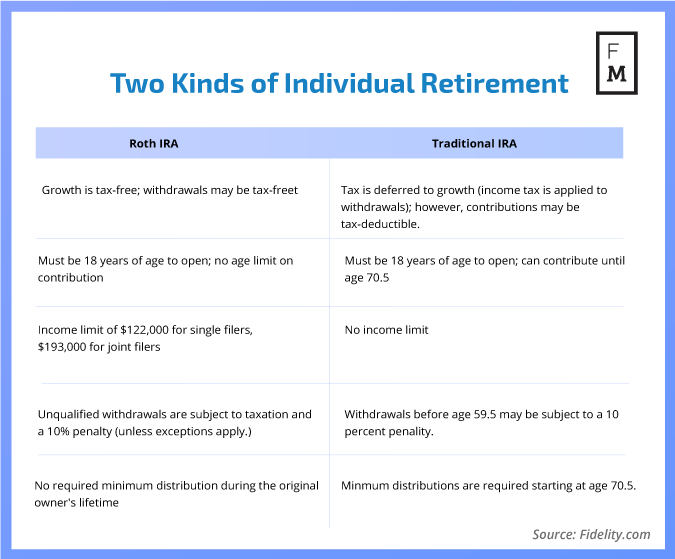 “It does, however, play a part and is worthy of being in an overall strategy of someone’s retirement account. Think of it as a pie. These are all pieces of your nest egg pie. There should be room for a small piece of this pie for blockchain/crypto, as long as it’s balanced with the more conservative pieces one probably already has exposure too.”

Is this really legal? Steckler told Finance Magnates that although the IRS’ guidelines are somewhat unclear, using cryptocurrency to contribute to a retirement fund is perfectly within the law.

Steckler explained to Finance Magnates that “the IRS states on their site what one cannot invest in” when it comes to retirement funds, and that cryptocurrency is not included on the list.” Additionally, cryptocurrency is legally treated as property by the IRS. When it comes to Bitcoin in particular, the fact that it can be legally traded for USD, Euros, and other fiat currencies “means it can also be used in place of dollars or other currencies in order to make investments and to fund an IRA.”

But what is most intriguing about the legal side of using cryptocurrency to contribute to an IRA is that it may be the cheapest way to trade crypto in terms of taxes.

“The benefits are without question monumental,” Steckler said. “When one is buying/selling/trading within a retirement account, there are NO taxation events.”

Steckler said that outside of the context of an IRA, trading crypto could be a rather tax-heavy event–and a logistical nightmare. “On the cash side, every time one buys or sells, or buys another alt using BTC or ETC for instance, there has to be tracking of where you purchased the coin, where you sold it, and converting it to the other alt (knowing the profit/loss).”

“There is no escaping taxes; it may not be today, tomorrow, or even next year, but at some point you will get a bill for these. Any buy or sell within 1 year is also considered short term capital gains, and can change your income bracket, and cause even more taxation. This can be up to 50% depending on what state you are in.”

None of This Matters With an IRA”

However, “None of this matters within an IRA. All trades are exempt from taxation as these are all done within the IRA arena.”

Therefore, “there is no bigger benefit to people are who active within the crypto communities,” Steckler said.” By investing a portion of your IRA or 401k in a crypto-based IRA, individuals can leverage tax-free personal property status thanks to IRS Notice 2014-21.”

However, individuals who contribute crypto into their retirement accounts will eventually be liable for taxes. “It is possible to retain the gains that are accrued tax-free until the individual chooses to take a distribution,” Steckler said.

The Practical Side of Things

How would any of this work on a logistical level?

There are a growing number of accountants and accounting services seeking to capitalize off of the desire to contribute to one’s retirement fund in crypto. However, echoing Matsumura’s words, a report by Brave New Coin explained that the most affordable way to contribute crypto to a retirement fund is to open up a so-called “checkbook IRA.”

As the manager of the LLC owned by the IRA, “you control how those funds are invested,” the report explains. “This includes the ability to invest in cryptocurrency.”

“No approval from the custodian is required, as the investment is legally held by the LLC, not the IRA. The IRS does issue some ‘prohibited transaction rules.’ These rules outright prohibit IRAs (and LLCs owned by IRAs) from investing in certain assets.” (However, as mentioned above, cryptocurrency is not on these lists–although it may still be best to consult with an expert directly before attempting this yourself.)

If you are contributing to an IRA or another retirement fund in crypto, it’s important to consider the kinds of assets that you believe will perform well in the long-term sense. Steckler said that at his own company, “we look for projects and coins that have proven their worth within the space.”

The key is to try and discern which projects will continue to fill a necessary role in a longer-term sense. Steckler is keen on the belief that at least some crypto projects will flourish with time: “in the next 3-5 years blockchain will be part of every person’s life; we are in the early ’90s when email came out. Now look where and how we use email daily.”