After dipping dangerously close to levels below $9,900 last week, Bitcoin appears to have regained a solid standing above $10k.

And indeed, things are looking upward: a week ago, the price of Bitcoin sat around $10,320; earlier in the week, BTC broke through the critical $11,000 mark for the first time in four weeks. At press time, the price reached $10,950, and appeared to be moving further upward.

The upward movement seems to have quelled concerns that Bitcoin would lose its position above the $10,000 mark in the longer term. In fact, the dip that occurred last week seems to be healthy for Bitcoin’s price – a healthy pullback after a period of overbuying. 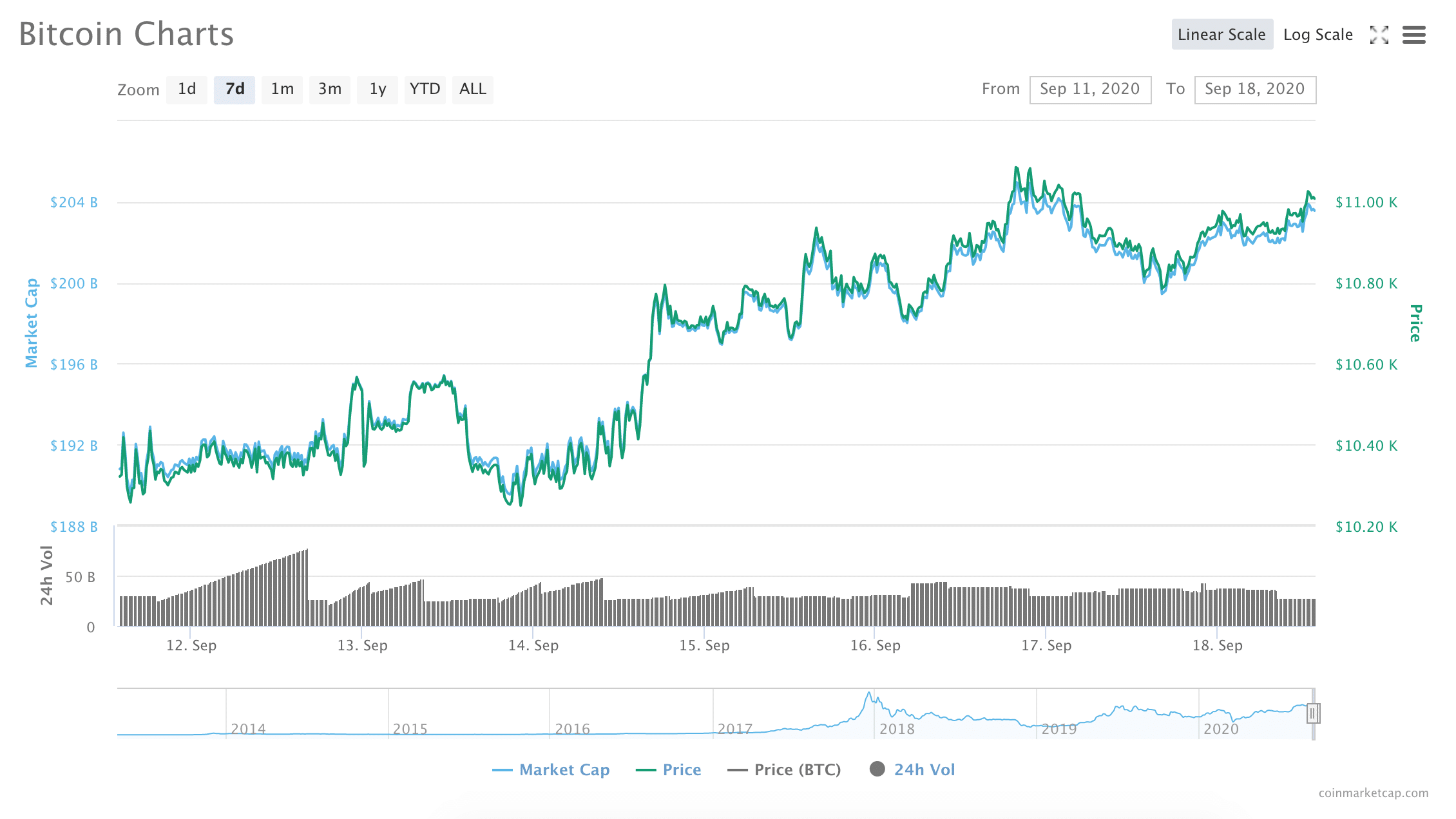 Additionally, the upward movement seems to have abated fears that Bitcoin would retrace below $9,700 to fill a ‘CME gap’ that was formed earlier this month

A ‘CME gap’ refers to a phenomenon in which Bitcoin markets make a sharp, sudden move outside of regular trading hours for CME’s Bitcoin futures markets, which results in a literal ‘gap’ in Bitcoin price charts. Often when this happens, the Bitcoin price will eventually fall back to the level where the gap was originally formed. This retrace in the price of Bitcoin ‘fills’ the gap.

However, it seems that Bitcoin may have managed to avoid retracing to fill the gap this time around. What’s next for Bitcoin?

“Any Subsequent Rally Will Need to Take the Coin over $12,000 for It to See a New High for the Year.”

While it is too soon to say if the upward tilt in the price of Bitcoin is a minor, short-term recovery or the beginning of a larger longer bull run, there are some analysts who seem to think that Bitcoin may be poised to make big movements.

For example, Bloomberg reported earlier this week that according to the GTI Global Strength Indicator, Bitcoin was showing its first buy signal since the 200 percent rise that followed March’s dip below $5,000.

Still, there are some hurdles ahead: “other gauges suggest any subsequent rally will need to take the coin over $12,000 for it to see a new high for the year,” Bloomberg’s report said.

$12,000 does not seem to be too unattainable, after all, Bitcoin did reach over $12,000 at several points throughout the month of August. However, it is unclear whether Bitcoin has enough short-term demand to push back over $12k.

The Ongoing COVID-19 Economic Crisis Is Affecting Bitcoin, but Experts Are Divided on How

Opinions among analysts seem to be divided.

For example, Steve Ehrlich, co-founder and chief executive of Voyager Digital, told Bloomberg that “the price of Bitcoin is reflective of the belief that Bitcoin is a hedge against the overall global economy,” and that therefore, Bitcoin’s upward journey will continue as uncertainty looms in the international economy.

“Bitcoin is extremely resilient and as it gains more and more adoption, in conjunction with better regulations suited to support Bitcoin, it continues to demonstrate its position as a reliable store of value,” he said.

On the other hand, some analysts believe that the dark shadow that is looming over the global economy is not a good thing for Bitcoin. 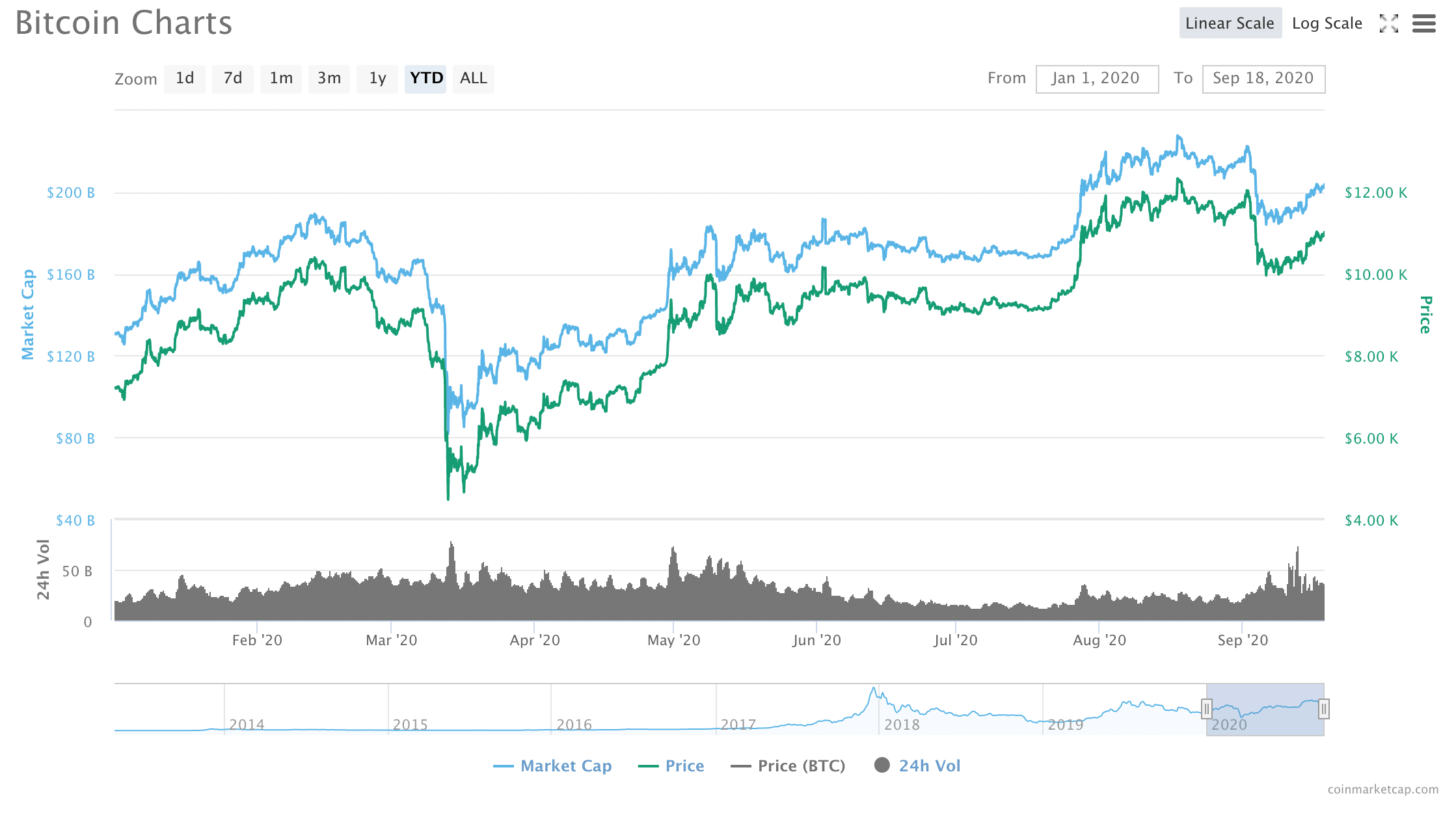 For example, Joel Birch, co-founder of automated crypto investing platform Stacked, told CoinTelegraph that “I don’t necessarily think that 2020 is going to be the year of some type of major retail bull run, largely due to the fact that the global economy still lingers over this industry, just like other financial markets,” he said.

Still, he maintains a fairly positive perspective in terms of upward price expectations for the rest of the year, specifically noting that the crypto market could see Bitcoin continuing to hold reasonable upward pressure in its push toward $15,000.

Traders Have Mixed Feelings about the Future of Bitcoin

At the same time, a number of other technical indicators tell a rather mixed tale for Bitcoin throughout the end of this year.

Oddly, when Bitcoin’s weighted social sentiment is at its lowest points, this seems to be when its price rises occur.

1) As $BTC has crossed above $11,000 for the first time since September 3rd, the sentiment of #Bitcoin on #Twitter is surprisingly at an all-time low, according to our weighted calculation that takes into account the overall volume of $BTC mentions vs. pic.twitter.com/aFW60bjWwu

Additionally, Bitcoin’s ‘fear and greed index’, which “analyzes emotions and sentiments from different sources and crunch them into one simple number,” is almost completely neutral at the moment.

This means that sentiment around BTC could go either way: when fear is higher, sell pressure on Bitcoin tends to make the price drop; and when greed is higher, buy pressure increases the price.

For example, the index was in the ‘extreme greed’ zone at around 80 through the month of August as Bitcoin sat around $11,000. When ‘extreme fear’ gripped global markets in March and April, Bitcoin’s price was relatively very low.

Therefore, the current neutrality in the fear and greed index indicates that things could go either way.

“Overall, the Data Suggests That Buying Pressure for Bitcoin Is Increasing.”

On the other hand, CoinDesk recently reported on findings from Chainalysis that the number of ‘young investment’ wallets, one to three months old and infrequently send bitcoin transactions, on the Bitcoin network has jumped to its highest level since February of 2018.

Chainalysis economist, Philip Gradwell told CoinDesk that the large amount of new young wallets seems to indicate growing momentum for Bitcoin: “it looks like new people are entering the market, buying bitcoin and putting it in wallets for long-term investment,” he said.

“Overall, the data suggests that buying pressure for bitcoin is increasing, and the supply available to buy is reducing as new purchases likely get locked up for the long term.”

However, Beyond Bitcoin, crypto markets seem to be headed for a bit of a cool down.

For example, the red-hot DeFi space, which reported gains week after week for much of the summer, seems to be heading into a period of prolonged correction.

Of roughly 40 DeFi assets listed on crypto market data firm Messari, only five showed gains over the past 30 days at press time: Cream, Uniswap, Hegic, Loopring, and Balancer. The rest of the assets were all in the red.

The continuing cooldown can be partially attributed to the SushiSwap incident that took place earlier this month.

At the time of the incident, Corey Caplan, partner of the DeFi Money Market Foundation, pointed out to Finance Magnates that, though much less frequent, incidents of fraud in the DeFi space could be having a large impact.

Still, while DeFi is young, there could be much more volatility to come.