The SushiSwap saga that began several weeks ago with a hugely popular new automated market maker (AMM) protocol has continued to get more complicated, and a bit more strange.

The trouble started over the weekend, when the pseudonymous founder of SushiSwap, known only as ‘Chef Nomi’, suddenly made the decision to sell all of his SUSHI tokens. A move that caused the token price to suddenly take a significant dive.

The token had already been sliding down before Chef Nomi sold off his coins: after peaking $11.27 on Tuesday, September 1st. By Friday, the SUSHI token price had dipped to roughly $4.50; when Chef Nomi sold his tokens on Saturday, SUSHI quickly dopped from $4.44 to $1.21, where it bottomed out.

All told, the price slid down roughly 90 percent from Tuesday to Sunday. By press time, the price had recovered to $2.84, softening the blow a bit: at $2.84, SUSHI is 74 percent below its peak price. 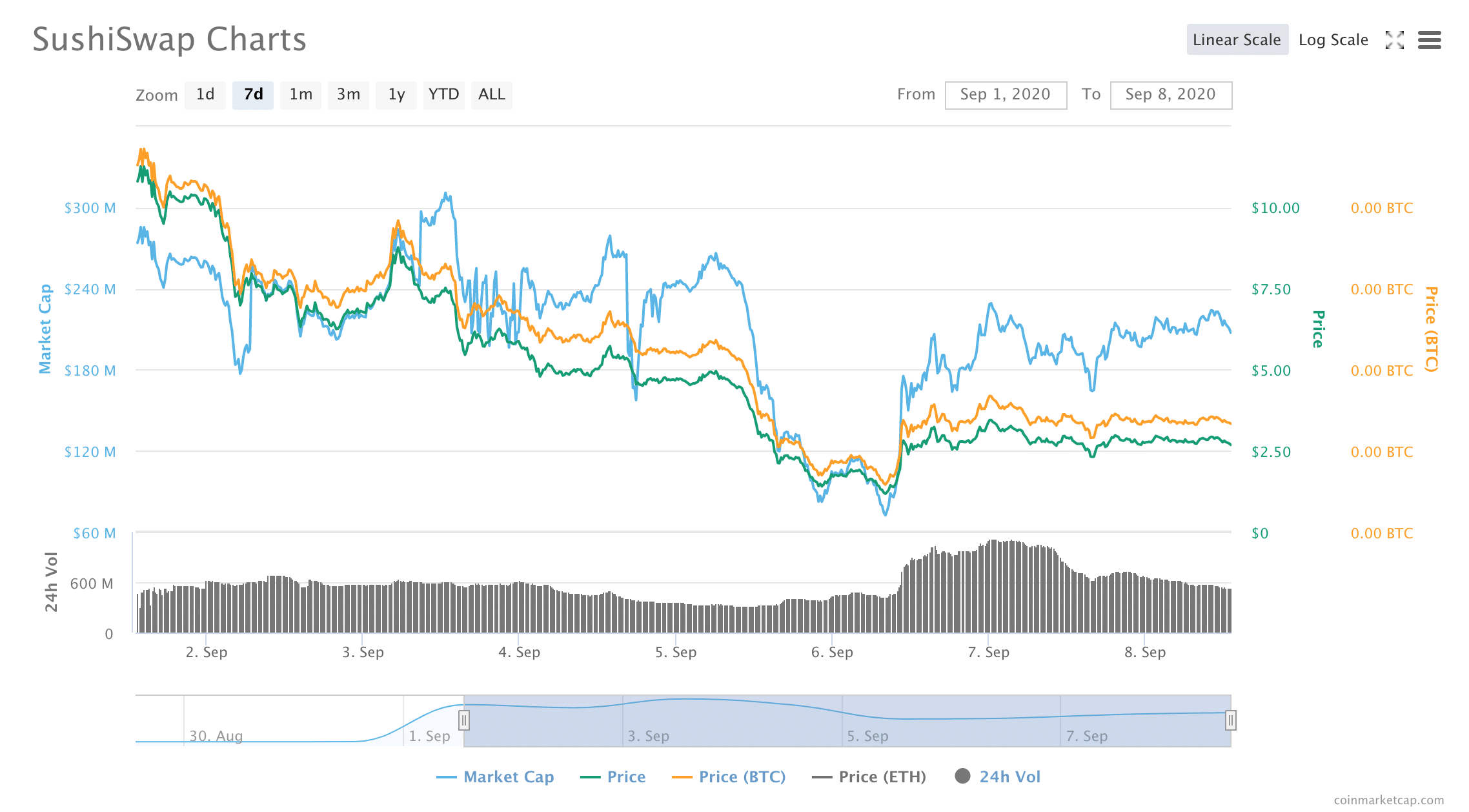 The decision by Chef Nomi to cash out of the project also allegedly led many to believe SushiSwap was some kind of an ‘exit scam’, where a protocol is built for the sole purpose of building up a token price before the scammer sells all of the tokens, abandons the project, and makes off with all of the cash.

For example, crypto lawyer Preston Byrne, who practices at Anderson Kill Law, advised Twitter users that “If you lost money in the SushiSwap exit scam, file a report with the FBI and lawyer up.”

If you lost money in the SushiSwap exit scam, file a report with the FBI and lawyer up.

“This coin is regulated as a security, appears not to comply with Section 5 or an exemption from registration and therefore a sale is subject to a right of rescission,” he said. “With an alleged ‘exit scam’ you could also probably find common law claims. There are ways.”

However, on his unverified Twitter account, Chef Nomi insisted that he was not exiting the project (in spite of the decision to sell all of his SUSHI tokens.)

“People asked if I exited scam. I did not. I am still here. I will continue to participate in the discussion. I will help with the technical part. I will help ensure we have a successful migration (sic),” he wrote.

Nomi also pointed out that Litecoin founder Charlie Lee also sold 100 percent of his LTC at one point, a decision that Lee was heavily criticized for.

“@SatoshiLite did that and Litecoin had no problem surviving,” Nomi said.

People asked if I exited scam. I did not. I am still here. I will continue to participate in the discussion. I will help with the technical part. I will help ensure we have a successful migration.@SatoshiLite did that and Litecoin had no problem surviving.

And, like Charlie Lee, Nomi also said that his decision to cash out of the project was actually made for the benefit of the SushiSwap community: “I did the recent move because I care about the community[…] I stop caring about the price, and I will focus on the technicality of the migration,” he wrote.

After Outcry from the Community, Chef Nomi Transferred Control of SushiSwap to Sam Bankman-Fried

However, in spite of Chef Nomi’s poetic waxings about how he was not going to ‘abandon’ the SushiSwap project, Nomi did, in fact, make the decision to relinquish control of the SushiSwap protocol again, citing a desire to do what is best for the community.

Nomi, whose real identity remains unknown, Tweeted on Sunday, September 6th, that he would be transferring control of the project to Sam Bankman-Fried, the chief executive of cryptocurrency derivatives exchange FTX.

“I hope SushiSwap does well without me. Again I did not intend to do any harm. I’m sorry if my decision did not follow what you expected,” Chef Nomi wrote after announcing the decision.

Bankman-Fried, who was one of SushiSwap’s largest supporters and token holders, said that he would ensure that SushiSwap’s migration away from Uniswap (the protocol that SushiSwap is based on) would go smoothly.

“To be clear, if it’s given to me, I’ll make sure migration happens as planned and transfer it to a real multisig,” Bankman-Fried wrote.

The transfer of control has been well-received by much of the crypto community: for example, BitMEX founder and chief executive, Arthur Hayes wrote “please save me from a bad SUSHI investment, Sam Bankman-Fried,” calling Bankman-Fried “our new master chef.”

Please save me from a bad $SUSHI investment @SBF_Alameda. He is our new master chef.

However, the fact that Bankman-Fried is known to own so many SUSHI tokens and has been such a prominent supporter of SushiSwap from the beginning has given way to some conspiracy theories.

For example, Spencer Noon, the head of DTC Capital, pointed out that because Chef Nomi’s identity is unknown, the transfer of power could have been an illusion.

“So let me get this straight,” he wrote. “The ‘anonymous’ founder of SushiSwap just out of the blue ‘transferred’ control of the project to the largest farmer of Sushi, and y’all are just going to take them at their word they’re two different people?”

However, Bankman-Fried has denied the allegations: “ I AM NOT AND NEVER HAVE BEEN NOMI. I DON’T EVEN EAT FISH,” he wrote on Twitter.

10) Anyway on the eve of the end of my chefdom I wanted to present one vision for Sushi. It's not the only one. But it's mine.

Now sushi is going to be yours, finally. Make of it what you will.

Bankman-Fried’s ‘chefdom’ will also be very short-lived: almost as soon as Bankman-Fried took control of the protocol, he made the decision to transfer ownership of the protocol to a number of users who would each hold individual pieces of a multi-signature key.

“Will then transfer keys to that multisig group,” he continued, “After that — Sushi shall be back in the community’s hands.”

Bankman-Fried also said that he would be holding a vote on the multisig concept itself: “we’ll put up a vote on this whole plan, if majority vote against then we’ll scrap it and go back to the drawing board.”

4) will then transfer keys to that multisig group.

After that — Sushi shall be back in the community's hands.

We'll put up a vote on this whole plan, if majority vote against then we'll scrap it and go back to the drawing board.

The reception of the plan appears to have been mixed: “Control of the multisig keys for sushiswap will be determined by a twitter popularity contest,” one twitter user wrote, adding “bullish”, perhaps sarcastically.

Control of the multisig keys for sushiswap will be determined by a twitter popularity contest.

However, as of press time it appeared that the plan was moving forward. Twelve candidates were in the race for becoming multisig holders, with Bankman-Fried at the top of the list.

In other words, the plan to save SushiSwap (and SUSHI token holders) seems like it may be working.

“There Are No Good Guys”

However, while a true crisis may have been averted, there seems to be a lot to unpack as far as lessons that can be learned from this sushi-themed series of events.

Mikko Ohtamaa, chief technical officer of FirstBloodIo, wrote that “there are no good guys” in this particular chapter of the DeFi development saga.

“There are only controversial characters on this one,” he said, including “commentators, farmers, traders, exchanges.”

For one thing, the fact that Chef Nomi decided to financially exit the project will always cast a shadow over SushiSwap’s history: “The developer(s) cashed out in a way that showed a lack of integrity,” Mikko wrote.

At the same time, the explosive popularity of the Sushi protocol also shows a lack of due diligence on the behalf of users and exchanges who eagerly bought into the project and listed SUSHI tokens.

“Users were greed–they thought [that] 1500% APY can be sustained,” Mikko said. And indeed, DefiRate reported at the end of August that SushiSwap was ‘netting upwards of 1500% APY’, and that the total value of capital locked in the ecosystem was quickly growing: by a whopping $1.27 billion was ‘locked’ inside the protocol just eleven days after its launch on Uniswap.

🤯 Wow, @UniswapProtocol 24hr trading volume is higher than @coinbase for the first time ever

Hard to express with how crazy this is. pic.twitter.com/48o0xRkiUo

Users and Exchanges Were ‘Greedy’

The huge amounts of money that were flowing into SushiSwap also prompted cryptocurrency Binance to quickly list SUSHI tokens, causing many to accuse the exchange of having neglected due diligence responsibilities for users.

“Binance listed $SUSHI in 2 days when it usually takes months for a good project,” Mikko wrote.

Adel Meyer, the head of the DAPScoin project, also wrote on Twitter that “the whole $Sushi and @cz_binance story is exactly what’s wrong with the #crypto industry. Few days old project with unknown founder gets listed instantly on @binance FOR FREE where legit projects get charged $$$ or just never get a chance.”

The whole $Sushi and @cz_binance story is exactly what's wrong with the #crypto industry.

Few days old project with unknown founder gets listed instantly on @binance FOR FREE where legit projects get charged $$$ or just never get a chance.

Binance chief executive, Changpeng Zhao allegedly deflected criticism over listing the SUSHI token in a tweet that appears to have since been deleted: “for SUSHI, I don’t know who the founder is. If we don’t list new DeFi coins, traffic goes to other exchanges, and we become…obsolete. We provide access to liquidity, we don’t force you to buy.”

“All coins are high risk, especially DeFi,” he wrote.

The SushiSwap debacle also seems to have accelerated a larger exodus of investor capital from the DeFi space.

For much of the last three-month period, a number of DeFi tokens have been making headlines for their astronomical growth in value. ETH, the grandaddy token of the DeFi ecosystem, was also performing extremely well.

However, DeFi token prices began to take a dive last month, particularly when it became clear that scalability problems on the Ethereum network were beginning to cause problems for users: slowed transaction speeds and high transaction fees on the network became the source of much criticism.

On the same day that Chef Nomi exited SushiSwap, there was also a significant decrease in the total amount of value that is locked in the DeFi ecosystem. On September 2nd, total value locked peaked over $9.5 billion before crashing as low as $7.56 billion on Sunday, September 6th. At press time, total value locked had recovered $8.02 billion.

For example, Mikko Ohtamaa pointed out that “Sushi managed to mobilise a global community[…] Very fast.”

Additionally, the project’s token distribution model was ‘fair’, and above all, ‘Sushi was simple. The value promise was easily understood’.

14/ And it was fun. Super fun. Delightful. New. Enjoyable. Farming, hype, all the drama surrounding it, pic.twitter.com/5fVcwAYGDF