Elliptic, the bitcoin analytics and security firm, today announced a new tool for bitcoin transaction monitoring and compliance. The company has launched ‘The Bitcoin Big Bang’, an interactive visualisation that plots the emergence and interconnectivity of the key players in bitcoin since its genesis in 2009.

While the full transaction history of every bitcoin in existence (the blockchain) has always been a matter of public record up until now, the ownership of individual addresses has remained largely anonymous. This has allowed illicit marketplaces such as The Silk Road to proliferate and has discouraged bitcoin’s mainstream adoption by the finance industry.

Elliptic CEO, Dr. James Smith, said, “If digital currency is to take its legitimate place in the enterprise it inevitably must step out of the shadows of the dark web. Our technology allows us to trace historic and real-time flow, and represents the tipping point for enterprise adoption of bitcoin. We have developed this technology not to incriminate nor to pry; but to support businesses’ anti-money laundering obligations. Compliance officers can finally have peace of mind, knowing that they have performed real, defensible diligence to ascertain that their bitcoin holdings are not derived from the proceeds of crime.”

The company says that for the past year, its team of PhD data scientists and engineers has worked to map the full 35 GB transaction history of the bitcoin blockchain. Using proven heuristics and sophisticated network analysis, The Bitcoin Big Bang visualisation identifies more than 750 of the largest entities and the historical transactions between them. Illicit marketplaces and money laundering services are identified by name, while standard entities are described purely by their primary business to protect privacy.

Elliptic has harnessed the underlying technology supporting the visualisation to deliver a full suite of ground-breaking anti-money laundering (AML) services. The API will enable real-time compliance, by alerting recipients of bitcoin payments linked to known thefts, illicit marketplaces and other criminal activity.

Dr. Smith continued, “Elliptic’s founding principle is to bring confidence and certainty to enterprises working with bitcoin. We were the first bitcoin custodian to provide comprehensive insurance, the first to be Big Four accredited and now the first to visualise the flows of bitcoin and explode the anonymity myth of the blockchain.” The AML suite will be available in July to a select group of early customers. 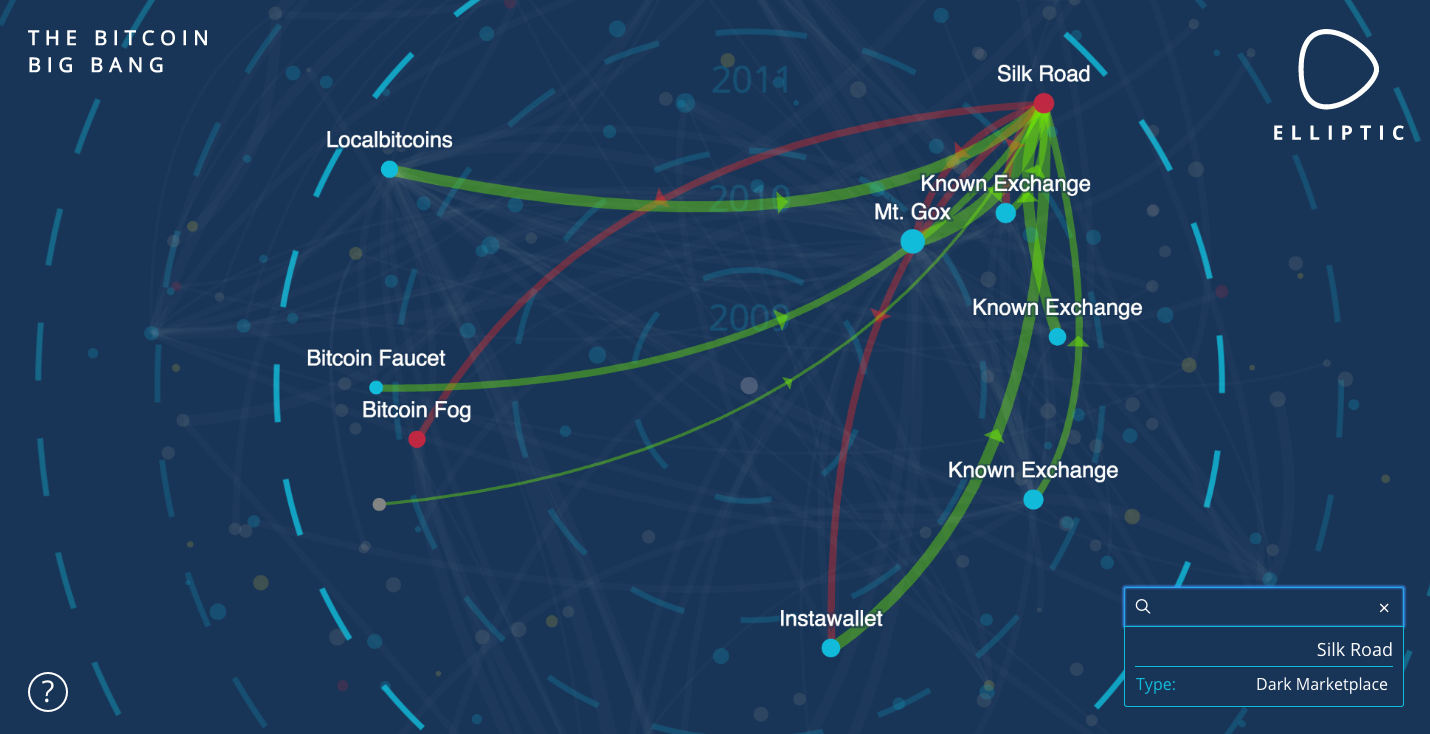 Share this article
Tags: Money Laundering
Got a news tip? Let Us Know

It is still somewhat speculative, correct? What if an entity gets mis-labeled?

It is still somewhat speculative, correct? What if an entity gets mis-labeled?