Following a disappointing conclusion to the Doha talks, OPEC oil production took another leap higher back in April, climbing to the highest level in years as cartel members remain in disagreement over a proposed production freeze.  While the policy of raising production to force out marginal producers is starting to show success, it is not clear whether the strategy will produce strong results over the longer-term.

Shale producers are indeed struggling to keep their doors open as evidenced by the recent downtick in US oil production.  However, falling US production and sluggish demand growth will not necessarily narrow the gap with demand.  As evidenced by the latest inventory figures, 2016 could very well repeat the losses experienced during the summer of 2015.  The low prospects for market equilibrium might see oil prices put in a ceiling as fundamentals regain their relevance.

In the meantime, Iran continues to fulfill its promises to return to pre-sanctions output, with production climbing to 3.500 million barrels per day, up 300,000 barrels during the same month.  However, despite rising production, prices have also remained elevated following the rally from 2016 lows.  Looking at the speculative positioning in the futures market, it has mirrored the rise in prices, but may be at a tipping point. Long positions in WTI climbed to the highest since last May while short positions have plunged to a 10-month low.

One of the notable developments arising from the recent price gains has been the resurgence of hedging amongst producers trying to lock in higher prices.  This is highly indicative of oil companies predicting another round of price weakness in energy markets.  Additionally, US inventories continue to climb, rising to the highest levels since 1929 with Cushing inventories rising by 1.746 million barrels for the week ending April 22nd. This brings the total in Cushing to 66.000 million barrels versus available space of 73.000 million barrels.

Should there be a repeat of 2015’s anxiety regarding inventory constraints, it could send crude oil prices significantly lower over the medium-term.  With Genscape predicting an additional 800,000 barrel build at Cushing for the last week of April, the present pace of gains suggests Cushing could conceivably be full by June, forcing producers to explore offshore storage.

While this could cause additional marginal producers to fail, it will not necessarily cause the death of American shale.  Private equity companies and other established names hungrily sitting on the sidelines hunting for deals could cause US production to rebound, constraining any upside in oil prices over the longer-term.

Additionally, the revelations of the latest OPEC production gains underlines the idea that the supply imbalance will not abate over the medium-term as increased competition and Pyrrhic victories hurt the bottom line for all producers. 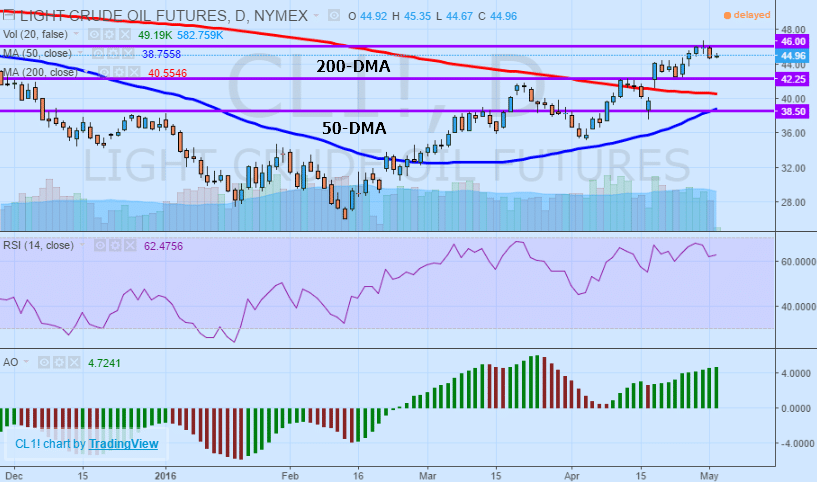 From a strictly technical point of view, West Texas Intermediate crude oil futures are trading just shy of November highs.  Encouraging continued gains in crude oil are the moving averages, with both the 50-day and 200-day moving averages trending below the price action.

Although the longer-term moving average continues to trend lower, the 50-day moving averages is acting as support and approaching a crossover.

While the moving averages may challenge a retest of the downside, certain indicators are starting to indicate shifting momentum.

Key support to watch is $42.50 a barrel before taking aim at the key $40.00 psychological level.  On the upside, $46.00 is presenting a formidable level of resistance.

The fact that the market is increasingly long oil futures contracts may be telling of the outlook for prices, especially when taking into account growing supply and weak demand expansion.  The one-sidedness of the trade suggests the market could very well tip back over.

Should the supply imbalance remain intact for months to come, overflowing inventories may stop the current rally dead in its tracks and set up the market for another test of multi-year lows.

Although the imbalance might hurt the US shale sector near-term, causing additional bankruptcies and defaults, longer-term, the industry is likely to cap any upside in prices due to its flexible nature.

With growing indications that the 2016 energy environment is closely resembling similar conditions experienced in 2016, the stage might be set for prices to trend sideways before tumbling once more.