With volatility back on the uptick, moves in illiquid credit markets are starting to bleed into the foreign exchange sphere. The EUR/USD currency pair has borne the brunt of the shakiness in markets owing to a number of factors both economic and political that are increasing risks.

The divergent outlook for the United States and Europe is a main driver of momentum at the moment, as the former looks keen to raise interest rates in September while the latter might have to actually increase easing measures under the latest asset purchase program.

Even though the EUR/USD currency pair has seen a spectacular bounce off of lows, the rebound might be coming to an end as looming problems like Greece remain in the spotlight and risk remains skewed acutely to the downside.

A quick top-to-bottom look at the Euro Area shows that the common currency is facing serious domestic unrest based on the staggering high levels of unemployment and growing debt-to-GDP ratios. Austerity driven policies have hollowed out the sovereigns as cost-cutting in place of fiscal stimulus measures means that the impact of loose monetary policies is largely unfelt in local economies.

With borrowing rates at/or near record lows, the time for governments to borrow to refinance outstanding debt and finance domestic growth has come and passed. On the unemployment front, although the aggregate measure has fallen, certain core nations have been unable to tackle the lingering issue. France in particular has seen the unemployment rise for months, while Spain has the measure trending right around 25%.

Pundits could point to the recent uptick in growth metrics across the Euro Area with certain sovereigns experiencing the fastest growth in years, however, much of this can be attributed to the weak exchange rate. The idea of devaluing through quantitative easing to stimulate exports has been a popular strategy pursued by many central banks including the Federal Reserve, Bank of Japan and Bank of England to name a few.

While the results are astounding, the reality of diminishing marginal returns sets in at a certain point. The problem with Europe’s form of asset purchases is that there is not enough sovereign debt to buy with the ECB’s program falling well short of targets. The weakness in monetization has coincided with the uptick in the euro, meaning that any expansion or ramping up of purchases is likely to pressure the EUR/USD exchange rate lower.

Greece remains a sticky subject adding complications to the outlook from both an economic and political standpoint.  While Europe believes it has the power to contain any crisis emanating from Greece whether default or exit, the reality is similar to that of the collapse of Lehman Brothers.  Understanding the potential for collateral damage is difficult until it actually transpires. A Greek exit would undoubtedly bring the euro even lower as it would raise concerns about the cohesiveness of the monetary union.

Not only will it have economic implications with other sovereign states forced to shoulder losses, the political ramifications are huge. With anti-austerity and anti-euro movements seeing momentum accelerate in other important regional economies, the Euro Area does not want to be viewed as a bully, forcing non-compliant countries to exit.

By comparison, the United States is not faced by many of these issues. Even though the latest growth figures show that GDP expansion is below trend, unemployment is at a much more palatable level and the end of quantitative easing has beckoned higher interest rates. The Federal Reserve has spent much of this week jawboning the probability of a September liftoff while also reiterating plans to raise interest rates twice before the end of the year.

In this respect, any hike will see the dollar take off after it rebounded from near-term weakness. Higher momentum in the dollar will persist as the Federal Reserve implements measures to normalize interest rate policies. While it might kill growth, it will certainly be a boon for the US dollar, making it the least dirty shirt in the laundry trade. With that in mind, EUR/USD has only one direction to head; lower.

From the perspective of price action, the EUR/USD has shown a perfect technical retrace higher after recovering from multi-year lows not seen since 2003. The pair is currently trending near the bottom channel line of a more medium term technical setup from the beginning of the month, however, the recent volatility in the pair has seen a sharp correction lower.  While the channel is bullish in nature and prices could try and retest the upper channel line, it is not in-line with recent price momentum.

One of the main tenets of technical analysis is that the correction comes swifter than the move. By this logic, the potential for a channel-based breakout to the downside in the coming sessions is entirely possible especially with the Greek negotiations unlikely to make any headway before the IMF repayment deadline. The main level to watch on the shorter term basis remains the critical pivot point at 1.1200. Falling below will potentially see a test of 1.1132 before resumption of the trend lower. 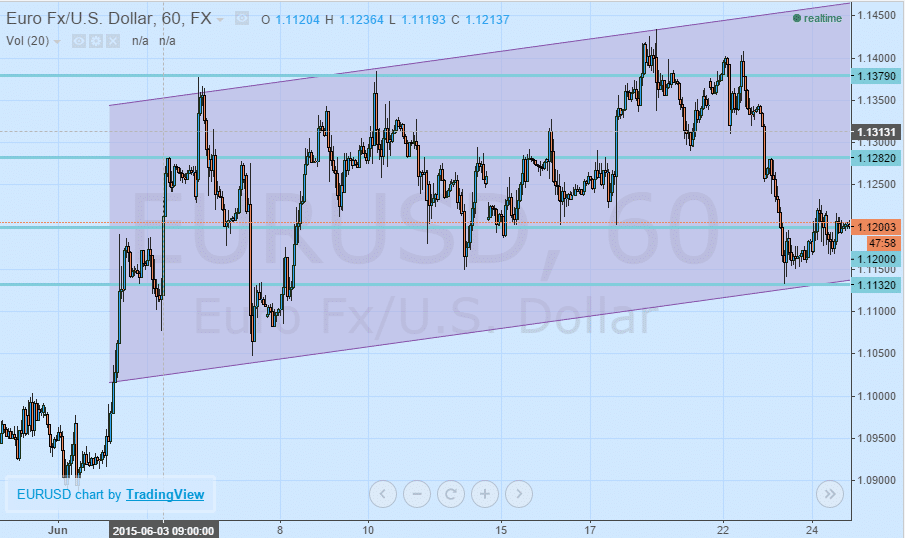 Even though the EUR/USD has not seen a bigger technical rebound to the order of 30-60% as is typical for technical moves, the headwinds are substantial owing to the deteriorating outlook for Europe and Grexit fears, coupled with the propensity for the Federal Reserve to raise rates in the next meeting. However, the bounce looks to have found a double top not to mention the death cross forming by the 50-day moving average crossing the 200-day moving average to the downside back in late 2014.

The technical indicators are all lining up against further upside in EUR/USD, with the latest rally running out of steam. Europe has an incentive to keep the euro cheap, so policy measures might be instilled to go ahead and achieve that purpose, paving the way for a break below the lows seen earlier at 1.0456 towards parity at 1.0000. 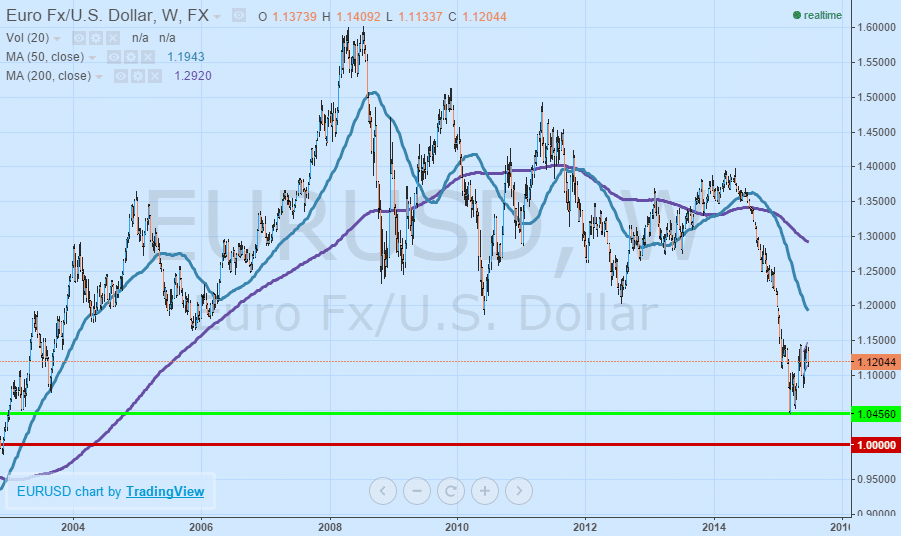 Risks remain acutely to the downside for the euro and while the United States is no fairy tale story, the path towards interest rate normalization is creating the backdrop for a starker future divergence in economic outlooks. With the Greek situation unresolved and the European Central Bank hoping to step up asset purchase efforts, the EUR/USD pair has only one direction to trend when coupled with the changing path for US monetary policies.

Parity however, is only the first stop with a test of those levels creating the potential catalyst for much more substantial losses in the pair. While this will benefit Euro Area economies through devaluation, the benefits are temporary and sooner or later Europe will have to address waning confidence in the euro dream.