Since pushing back higher after recent mid-month lows, the EURGBP continues the slow march back to the upside following months of policy expectations weighing on the pair.  Anticipation of an increasingly accommodating policy from the European Central Bank stands in stark contrast to the Bank of England which is carefully monitoring inflation for hints of the economy bearing the strain of the first interest rate hike in years.

Although unlikely short-term, the more hawkish viewpoint over the medium-to-long term reflects growing confidence in the UK economy as economic expansion ranks among the best of the major advanced economies.  With the ECB set for another policy shift this week, EURGBP is likely to see recent gains erased as the pair re-tests multi-year lows.

Monetary policy is the key driver of market momentum at the moment with the upcoming December month likely to see increased volatility as a result of continued dovish policy adjustments.  Although not quite like the last super Thursday event from the Bank of England, the European Central Bank meeting and decision later this week will likely be no less important.  Some analysts are viewing the move as more important than the upcoming Federal Reserve meeting in the middle of the month.  However, because of the nature of the ECB, neighboring regions might also have to immediately adjust policy to reflect these changes.

On a top down basis, the UK is greatly outperforming its Euro Area peers on an aggregate basis.  Unemployment in the Euro Area presently stands at 10.80%, more than double the 5.30% recorded in the UK.  Growth in the UK has also remained steady and stable, edging towards 2.30% which even outstrips annualized GDP gains in the United States compared to Europe’s modest 1.60% growth.  Inflation however remains a sticky issue for the UK with the current consumer price figures in deflationary territory while largely thanks to asset purchases, Euro Area consumer inflation has managed to pop back into positive territory.

Despite the inflation issue, the simple fact that the UK intends to raise interest rates well ahead of its European counterparts is alone enough to see the EURGBP pair tumble lower as traders bet on a rate hike cycle from the Bank of England while the European Economic Area is forced to continue to ease policy to stimulate lending.  One of the key differences weighing on the outlook however remains fiscal policy.  The UK has a much more positive fiscal policy and stimulus approach versus the Euro Area which remains fragmented along country lines.  Austerity continues to be a popular idea that will weigh on the euro as growth and investment in the economy falter as a result.

After a modest rebound on the back of increasingly dovish commentary from the Bank of England, the EURGBP pair was able to show a modest rally as the potential for a UK interest rate hike was pushed off further into the future.  While there is currently a bullish setup emerging in the pair with the right shoulder of a head and shoulders pattern forming, risk factors remain firmly biased to the downside in the pair.  Nevertheless, the emergence of the setup could be a signal that further upside might be possible over the coming sessions before the Central Bank decision from the ECB on Thursday.  The neckline at 0.7010 is a perfect place to initiate call positions on a short-term basis targeting 0.7405 on the upside.  However, based on the upcoming decision, that distance is unlikely to be covered in the next few days. 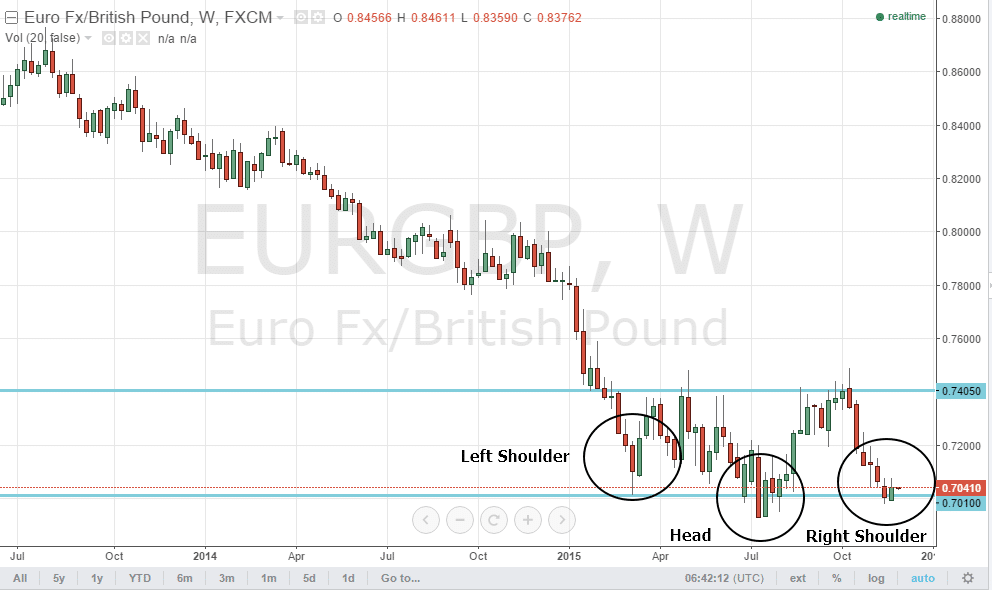 On a more medium-term basis, the lows at 0.6930 is the key support level to watch with any put positions initiated on a rally intended to target this level and below.  Crossing this threshold would mark the lowest price of the EURGBP since 2007 with the potential to go much further based on the divergent monetary policy regimes in Europe.  However, instead of chasing after directional momentum from upcoming policy speeches and decisions, the best strategy remains taking a position on a pullback higher or fading a rally to the upside.  Trying to catch a falling knife with Call positions is not suggested due to the more minimized upside rewards and pervasive downside risks for the EURGBP pair.

Risks to the Outlook

There are an abundance of risks to the outlook for the EURGBP pair, namely the upcoming policy speech from Bank of England Governor Mark Carney on Tuesday followed by Euro Area unemployment which is expected to hold steady at 10.80%.  A Euro Area CPI reading is due on Wednesday, immediately preceding the ECB’s interest rate decision on Thursday which is already showing indications of a deposit rate cut and potential expansion of asset purchases.

These measures will likely push the euro lower against the pound on renewed expectations that this will be the beginning of a new round of accommodation from the European Central Bank.  With these factors in mind, it becomes an absolute imperative to utilize rallies as an excellent point to initiate put positions in the EURGBP to take advantage of the upcoming schism in monetary policy measures.