Amazon (AMZN:US) is a behemoth in the online retail and sales industry. From its start as an online book retailer, the website now offers a plethora of goods for sale online (both directly and through third-party sellers) as well as a diverse selection of services users can choose from (video and music streaming, grocery shopping and cloud infrastructure).

However, the company’s massive presence hasn’t translated to profits consistently, and even optimistic predictions for the company’s shares and financial future are tempered with some doubt about Amazon’s ability to keep operating at the same level, as well as Amazon’s own valuation of itself and its reporting methods.

Several analysts in recent months have predicted appreciation in Amazon share prices, forecasting strong growth and performance. Firms such as Morgan Stanley and Sanford C. Bernstein have recently circulated research recommending valuations per share between $520-600 based on Amazon’s first quarter report, the first to reveal and include the company’s cloud infrastructure (Amazon Web Services or AWS) performance for the quarter.

These numbers were impressive in their own right, with the subsidiary accounting for $680 million of Amazon’s $2 billion in operating income (TTM) and 34% of the company’s income for the period. AWS was a solid performer by itself, increasing revenues by 49% to $1.57 billion year-over-year compared to the first quarter of 2014.

Many analysts are positive about the company’s prospects based on its constant expansion and improvement of its service ecosystem. Services such as its Prime subscription (which offers free video and music streaming, as well as free two-day shipping) and Dash (which allows users to quickly buy groceries and home goods) have been touted as positive moves.

Investors are clearly optimistic after Amazon’s share prices rose almost 9% following the first quarter earnings report in spite of reporting $57 million in losses and earnings per share of -$0.12. More and more, analysts are becoming wary of Amazon’s shares ability to perform due to several factors, including a slowing and weaker revenue growth than competitors and still small contribution to the core business from AWS.

First, the Company’s operating margins have been steadily trending downward, dropping from 2% in the first quarter of 2014 to 1.1% in the first quarter of 2015. Amazon’s net margin is even lower, sitting at -0.44%. This is due to a severe increase in expenses across the board, while interest expenses increased by almost 174% due to the Company’s debt. Second, despite the strong showing of AWS over the previous quarter, and its quick profitability, it’s important to note that it still amounts to a small percentage of Amazon’s total business.

Finally, many believe that current valuations of Amazon are being overly optimistic, with many upgrading the company’s stock despite a lack of results and positive signs. Amazon’s own financial guidance for the second quarter is pointing to renewed growth both for operating income which is expected to grow 7-18% year-over-year (est. $20.6 to 22.8 billion, or 7-18%) while projecting smaller losses over the same period.

There are several prominent technical signals apparent in Amazon share prices. The golden cross technical pattern was realized on February 18th with the shorter 50-day moving average crossing the longer 200-day moving average to the upside in a notoriously bullish sign for shares prices. This is a strong signal that the shares have further appreciation potential, but based on the current consolidation, nevertheless seem unlikely to hit the optimistic estimates from Morgan Stanley and Sanford C. Bernstein without a major announcement from the company.

The breakaway gap realized after the latest earnings results were released in April is another bullish sign contributing to recent higher momentum. Resistance on the upside sits at $438.77 with any higher break meaning a run at all-time highs at $452.65. 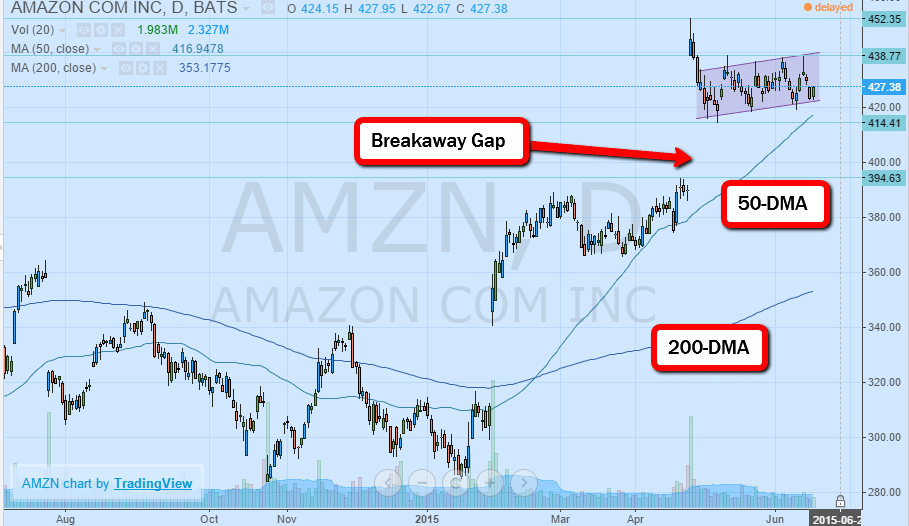 However, on a short-term basis, the share prices are currently experiencing a consolidation with a modestly bullish equidistant channel pattern setting up in the pair since May 6th.  Although bullish in nature at present, a move below the lower channel line could indicate a potential bearish breakout targeting support at the breakaway gap region. However, the prevailing strategy for trading the channel is long positions from the lower channel line targeting the upper channel line.

Fighting the uptrend, while not as risky as more pronounced channels, still sees diminished reward and increased risks.  Should prices fill in the gap, the probability of further losses in share prices is high considering the underlying financials which show margin compression and growing burden from debt.  The major level of support to keep an eye on is $427.38 as any break could see a pullback in prices as deep as $394.63. 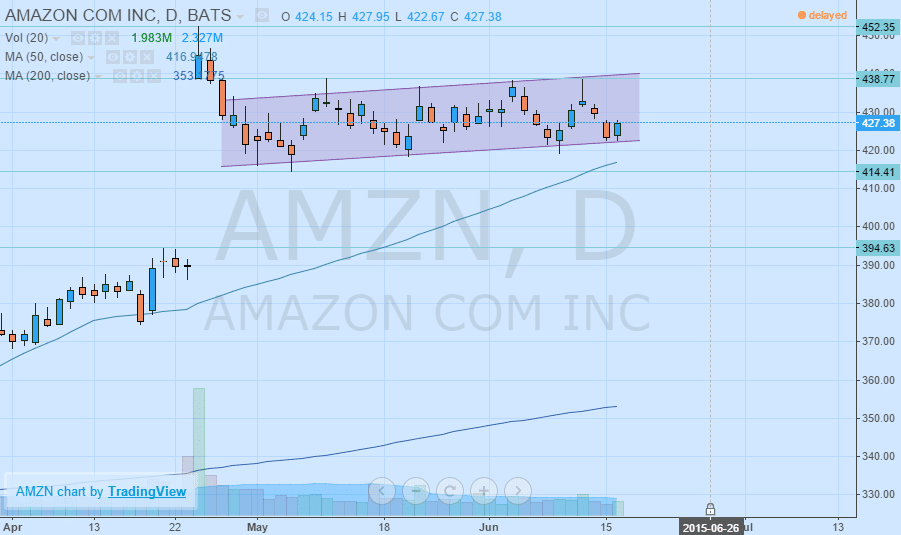 Bullish sentiment from both investors and traders might contribute to the further upside in Amazon prices, as the company works to continue growing the cloud services while expanding margins in the core business.  However, rising debt levels and question valuation might mean that any higher move in prices might be accompanied by a correction beforehand.

Although sales revenue remains strong, higher growth will be needed to justify the valuation while cost cutting and expense management will be key to providing shareholder value. From the technical side, most of the indications are for the upside, but should the shares fill in the earnings gap, it could spell a deeper retreat in shares over the medium term.