NewsBTC has forged its latest strategic partnership with foreign exchange news portal, FxPips. The accord caps off a busy H2 for NewsBTC, which has been aggressively securing talent and striking new deals with other venues.

Nearly one month ago, NewsBTC unveiled a new deal with Fintechist, representing an integral development for the cryptocurrency and blockchain-focused media company. The partnership saw NewsBTC greatly expand its cryptocurrency coverage, further improving its capabilities in blockchain technology and other related fields as well.

Gautham, Chief Editor at NewsBTC commented: “Our interest in forging relationships with forex and trading news publications is influenced by the increasing interest in cryptocurrency among forex and commodities traders. Further, we have been witnessing many platforms including Bitcoin and other cryptocurrencies into the list of assets.”

Fast forwarding to the present, NewsBTC has again made a splash, this time teaming up with FX media portal FxPips. The development reflects NewsBTC’s diverse focus on other asset classes in addition to its core cryptocurrency emphasis.

The group has been gradually strengthening its FX focus in successive months, also recently embarking on an aggressive hiring spree. This culminated in the on-boarding of several marquee hires, including veteran journalists, business developers and financial analysts in the FX space. 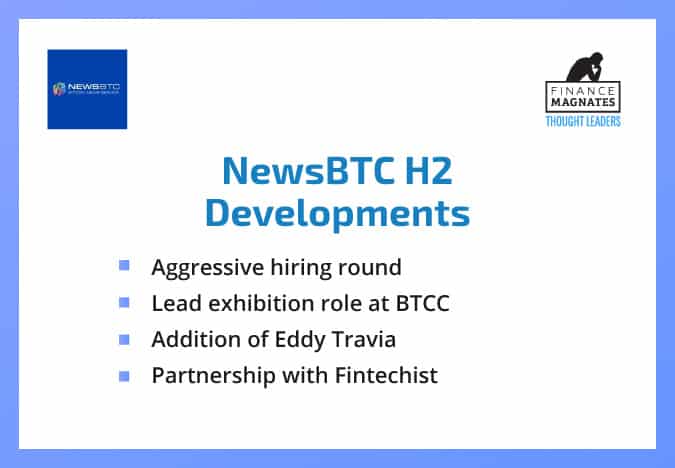 The deal also is the first under the tenure of newly acquired advisor Carolina May, who is herself no stranger to the FX realm. Since joining NewsBTC last month, the former FXStreet CEO has managed to help bolster the group’s FX coverage, which should continue with its arrangement with FxPips – she also serves on the group’s advisory board.

“Combined with growing prominence of ETFs and possible classification of ICO tokens as securities further pushes cryptocurrencies into mainstream finance. With all these developments happening around us, the collaboration with FxPips will help us to cater to everyone who are even remotely interested in Bitcoin and/or other cryptocurrencies,” he noted.

Unlike other news portals, NewsBTC has managed to successfully pivot off of a singular focus, instead touching on a variety of asset classes in the financial services realm. In inking agreements with Fintechist and FxPips, the scope of NewsBTC’s news coverage is now greater than ever.

“We see a synergy between NewsBTC and FxPips as we are known for offering strong technical analysis and forecasts in the cryptomarket and our partnership will go beyond just sharing insights as it will help readers and clients get the best of both worlds — quality content and extended industry reach,” he added.

Taken as a whole, several existing FX brokers and traditional financial groups offering cryptocurrency services have all benefitted from NewsBTC’s recent initiatives. A series of new hires has also paid dividends for FX brokers and cryptocurrency providers, which have managed to take advantage of the most comprehensive advertising packages at NewsBTC to date.