Foreign exchange trading volumes submitted to CLS Group’s settlement and aggregation service were released today for the month of April 2014, showing considerable drops in a yearly comparison, but only slightly worse than the previous month.

Average Daily Volumes (ADV) submitted to CLS in May, according to an official press release, were reported at 977,460, combining the settlement and aggregation service, down just 0.7% from 983,850 during the previous month, but April was already a very weak month for CLS with about a 15% decrease in volumes. In May of last year, the ADV was 1,329,316, the figures representing a 26.5% drop in volumes for CLS.

While the drop in volumes only slowed down in May, its rival ICAP’s EBS in fact earlier reported a rebound of 7% during the month, most likely due to increased euro volatility.

The average daily value submitted to CLS was US$4.82 trillion, up 0.6% from US$4.79 trillion during the previous month, but again we have to keep in mind that April was a weak month that saw a decrease of 10.5%. In May 2013 the figure was US$4.87 trillion representing only a slight drop.

An excerpt from the CLS press release of April’s figures, compared both Month-over-Month and Year-over-Year, can be seen below: 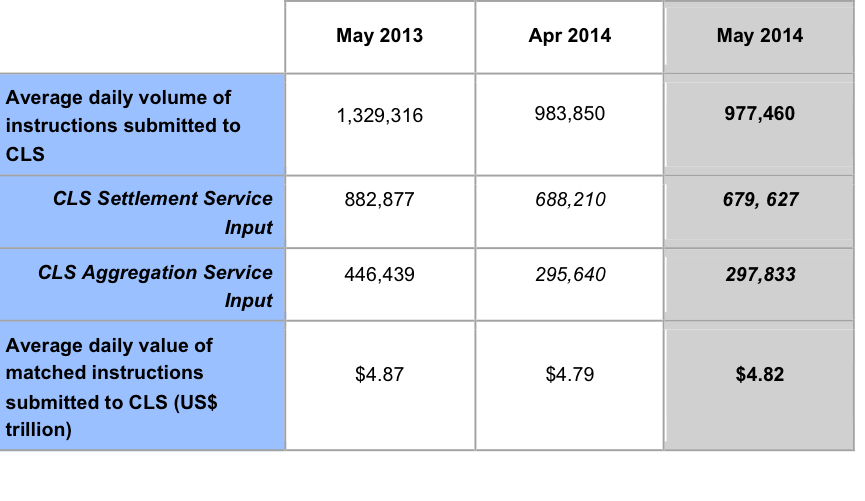 Share this article
Tags: Adv / cls
Got a news tip? Let Us Know