ITG (NYSE:ITG), an independent execution broker and financial technology provider, today disclosed its US trading volumes for April 2016, which was defined by plunging volumes MoM, according to an ITG statement.

ITG’s total trading volumes came in at just 2.7 billion shares in April 2016, a ways off from 3.5 billion shares back in March 2016, or -22.9% MoM. The performance was largely commensurate with other institutional venues that have experienced a decline in volumes throughout Q2 2016. 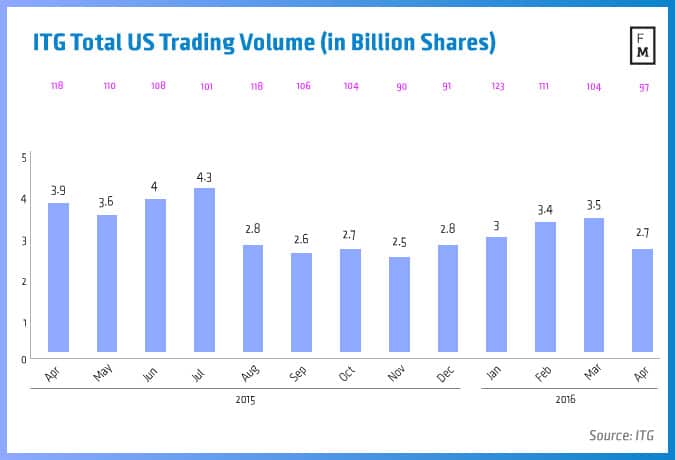 Another area of ITG’s latest figures that bears notice is its average daily trading commissions in April 2016 across its Canadian, European and Asia Pacific (APAC) operations. These commissions were up by 1.0% compared to Q1 2016, which is noteworthy given such a rapid pullback in volumes across the board. Glancing at ITG’s year-to-date (YTD) volumes, the broker has already secured 12.6 billion shares, whilst averaging a total of 153.4 million shares in ADV, still above its long-term averages.

Last month, ITG made headlines when it named a senior addition to its executive team, appointing Saro Jahani as its Managing Director and Head of Global Technology Architecture.

Share this article
Tags: itg / volumes
Got a news tip? Let Us Know