CLS Group, a provider of risk mitigation and operational services, has reported its volumes and aggregation services data for the month ending May 2016, which incurred a pullback MoM that pared all of the previous month’s gains, ultimately extending a 2016 downtrend, according to a recent CLS statement.

2016 has been a mixed bag for CLS Group in terms of volumes, having oscillated over a monthly basis though largely moving lower throughout Q1 2016. Like other institutional venues, CLS Group has been unable to mount any sort of sustained recovery in its volumes, especially now with a traditional summer lull approaching. Despite the recent downtrend, last month saw a slight rebound in its volumes, though CLS’ latest tranche of data suggests that the momentum was not sustainable.

In taking a closer look at the volumes, CLS also saw weaker performances across the board relative to its 2015 counterpart, with May 2016 having represented a decline of -14.9% YoY from 1,138,576 as reported back in April 2015. By extension, its settlement service input and aggregation service input fell by a factor of -7.2% and 34.1% YoY respectively.

Lastly, CLS’ submitted average daily input value yielded just $4.61 trillion during May 2016, retreating lower by -7.1% MoM from $4.96 trillion in April 2016. In addition to a MoM interval, May 2016 also saw its latest input value exactly match the same figures disclosed in May 2015, unchanged YoY from $4.61 trillion. 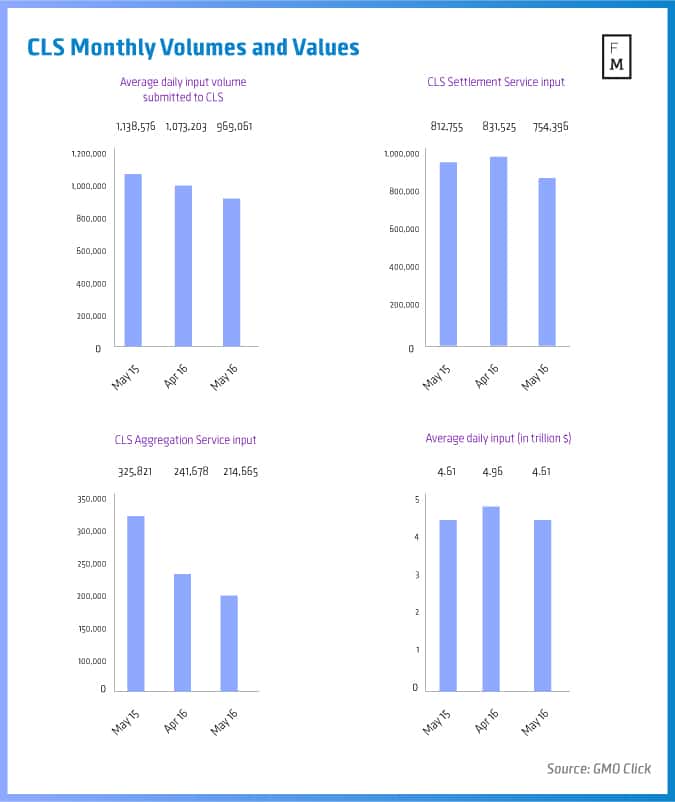