Thomson Reuters has just announced the company’s latest foreign exchange (forex) trading figures for the month of August 2015. The trading volumes across the company’s Matching and FXall trading platforms have seen an uptick, rising on both a monthly and an annual basis.

Although the figures are not stratospheric, the rising volumes are good news for the company, which has seen a couple of disappointing months in terms of declining volumes, with both May and July well below par.

Getting into the numbers, Thomson Reuters reported that the total average daily volume (ADV) of forex trading across its platforms in August totalled $364 billion. This represents a 2.5% increase from the same month in 2014 and a 3% jump from July 2015.

Of that total volume, the figure can be broken down into spot trading and other, which includes forwards, swaps, options and non-deliverable forwards (NDFs). The average daily volume for spot trading in August came in at $119 billion, a healthy 16.4% up from the previous month and a 10.6% increase YoY. 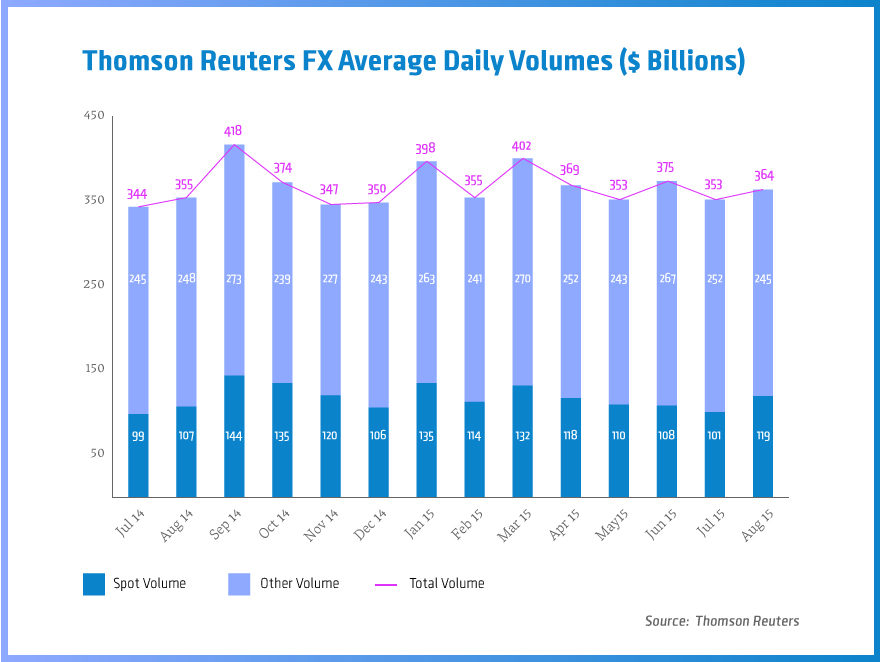 The figures will encourage the company, which faces stiffening competition. Just last month, the company announced additional forex trading capabilities for corporate treasurers on its flagship desktop offering, Eikon. The move came only days after Eikon’s rival, ICAP’s EBS BrokerTec, revealed that it was implementing a similar offering.