The minutes of the December policy formulated by the Bank of Japan were released on Wednesday. They helped to shed additional light on the internal split over the supplementary measures that were decided at that meeting. However, the skeptics warned about possible drawbacks.

At the December 17-18 meeting, the policy board of the central bank voted 6-3 to enable them to undertake a series of steps aimed at supplementing the massive asset purchase program. The board included an extension of average maturities of the bonds of the Japanese government being bought by the bank for 7-12 years. An extension of the exchange-traded stock funds purchases of the Bank of Japan by Y300 billion per annum.

Some of the board members indicated that measures were required to smooth the asset purchases and dispel fears concerning the sustainability of purchase programs. The minutes indicated that such steps would empower the BOJ to undertake measures of additional easing in a fairly timely manner should that become necessary.

However, one member disagreed, indicating that such a move would cause a misunderstanding among the market participants as the asset purchase program nears its limit.

The central bank avoids identifying board members by name in the minutes customarily.

Since the Halloween easing that took place in October 2014 when Governor Haruhiko Kuroda scraped by with a 5-4 thin margin, the board of the bank has become sharply divided. Shinzo Abe, the Japanese Prime Minister, has tried to tip the balance of a section of the board in favor of the policies formulated by Mr. Kuroda to replace two of the retired board members with those who vehemently support aggressive easing.

The board of the bank appears to have gone through an intense debating session over details of supplementary measures. The majority of the members indicated that the maturity extension of debt purchases was quite necessary for ensuring smooth and flexible conduct of the JGB buying. A few of the members indicated that the bank could manage purchases without making the change.

Some of the members spurned the idea of creating an ETF purchase framework worth Y300 billion in addition to the major ETF buying scheme of Y3 trillion. This was designed to support the companies that were eager to invest and raise employee wages. One member indicated that the BOJ should avoid engaging in measures with features like those of industrial policies as the major characteristic.

At the most recent policy meeting that was held last week, the board of the central bank undertook a clear-cut measure of easing by setting the key interest rate below the zero mark to spur borrowing and lending. Beginning at the middle of this month, the Bank of Japan is expected to impose a negative 0.1% interest rate on a section of yen deposits that are parked by commercial banks at the central bank.

According to Richard Koo, negative rates are an act of desperation that are born out of despair

The negative interest rate policy formulated by the Bank of Japan will not solve the problems of Japan.

The Nomura Research Institute’s chief economist, Richard Koo, says that adoption of negative interest rates by the BOJ is a sign of despair because of the inability of inflation and quantitative easing measures to produce desired results. Lowering the bank’s interest rates is expected to have little effect in the country because many Japanese companies are trying to minimize the level of debt despite them having great balance sheets as a result of dearth of the domestic investment opportunities and debt trauma.

Mr. Koo also points out the fact that the private sector has managed to save a GDP net of 6.7% in 12 months through 2015’s third quarter despite the zero interest rates. Mr. Koo adds that major incentives for driving capital investment will be required to encourage the companies to spend again.

The USD/JPY shows a muted reaction

The USD/JPY is currently showing a somewhat muted reaction to the speech made by Governor Haruhiko Kuroda of the Bank of Japan.

Before the event, the currency was 119.66 but it has since dropped to 119.62. On Friday, the BOJ decided to adopt a negative interest rate to push the reserve rate into the negative territory. The steps taken by the BOJ appear helpless due to pressure from the Chinese economy’s slowdown and the tumble of commodity prices.

Mizuho Bank’s chief economist, Daisuke Karakama, said that they don’t want to welcome extra easing as had been previously experienced in October 2014. This was attributed to the confusion of using negative rates on a section of the yen deposits of commercial banks to the central bank. 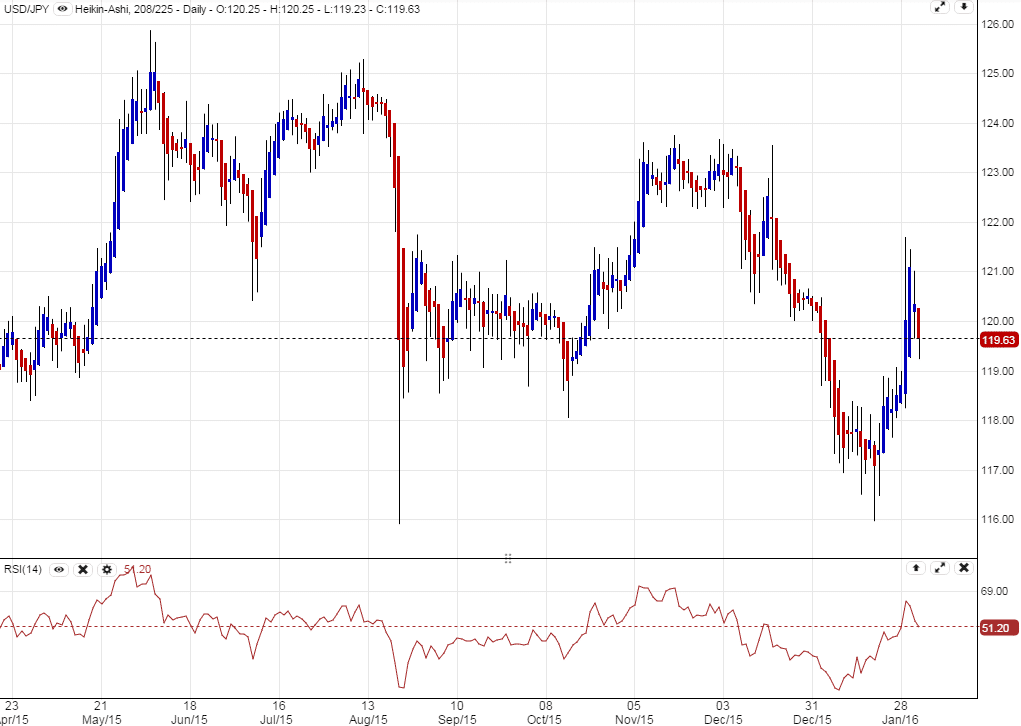