Algorithmic developers are receiving some positive news today as Spotware Systems, operators of the cTrader platform, have announced integration with Microsoft’s Visual Studio. With the integration, users of cTrader’s algorithmic trading system will be able to develop C# based strategies using the Visual Studio environment. For developers, integration with Visual Studio means the ability to access time saving components of the compiler, such as code snippets and IntelliSense, as well as the platform’s debugging tools.

Speaking about the added efficiency, Sergey Borisov, cAlgo Product Manager, stated in the company’s public release, “This release is really going to speed things up for our coders and ensure maximum efficiency, minimal errors, and excellent coding capabilities.” He added, “We’ve worked hard to provide a good editor in the cAlgo platform, but Microsoft Visual Studio is the number one tool for developers of .NET languages today, and the power of some of its functionality is unparalleled. We really hope this will take what’s possible on cAlgo to the next level.”

Speaking to Spotware Systems about the usage of their cAlgo system in tandem with cTrader, Ilya Holeu, Head of Sales at the technology provider, stated to Forex Magnates, “It differs from broker to broker in the range of 0-30%.”  In addition to the development of algorithmic trading strategies, cAlgo can also be used for the creation of customized technical analysis indicators. Similar to Ninjatrader, Spotware made the decision to operate its development environment using the popular C# programming language as opposed to producing a proprietary language like MetaQuotes’ MQL  The advantage of C# is that it provides programmers the opportunity to develop in a language many are familiar with. 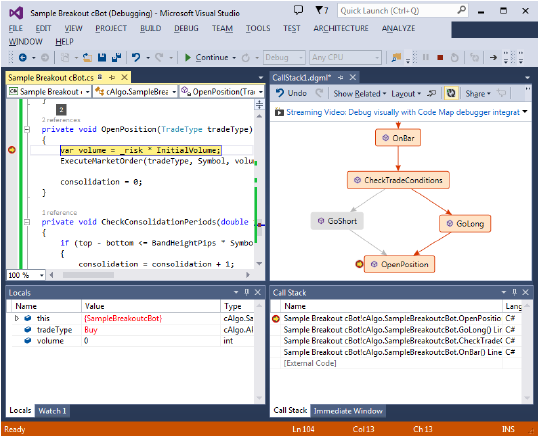 Share this article
Tags: ctrader
Got a news tip? Let Us Know