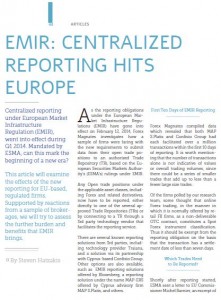 As the reporting obligations under the European Market Infrastructure Regulations (EMIR) had gone into effect on February 12, 2014, Forex Magnates investigated how a sample of firms were faring with the new requirements to submit data from their open trade positions to an authorized Trade Repository (TR), based on the European Securities Markets Authority’s (ESMA’s) rulings under EMIR.

Any open trade positions under the applicable asset classes, including Forex and related derivatives, now have to be reported, either directly to one of the several approved Trade Repositories (TRs) or by connecting to a TR through a 3rd party technology vendor that facilitates the reporting service.

The main challenge that has since arisen is that there is a lack of consensus on how some of the instruments – namely FX spot transactions – are defined throughout the EU (see below).

Forex Magnates compiled data which revealed that both MAP S.Platis and Confisio Group had each facilitated over a million transactions within the first 10 days of reporting. It is worth mentioning that the number of transactions alone is not indicative of values or overall trading volumes, since there could be a series of smaller trades that add up to less than a few large size trades.

Of the firms polled by our research team, some thought that online Forex trading, in the manner in which it is normally offered by retail FX firms, as a non-deliverable OTC contract, constitutes a Spot Forex instrument classification.

Thus it should be exempt from the reporting obligation on the basis that the transaction has a settlement date of less than seven days.

Which Trades Need to Be Reported?

A response followed 12 days later, on February 26, from the European Commission on behalf of Mr. Barnier sent to ESMA chairman Steven Maijoor, it included an acknowledgement of the need for further clarification: “I would be grateful if you could provide us with details of how point (4) of Section C of Annex I to MIFID and the definition of an ‘FX forward’ has been transposed by the national competent authorities.”

Following our publication of this story, a request for public comments had been made by the European Commission (EC), calling on all FX Related firms in Europe to provide their feedback on the varying definitions of Foreign Exchange in an effort to properly classify them across EU-member countries, which read:

“Concerns have been raised about the lack of harmonisation between the EU Member States on where the boundary lies between what is an FX financial instrument and a spot FX contract. The Commission therefore seeks stakeholders input on where they consider this boundary should be set. This consultation is narrow in scope and has the purpose of bringing clarity on this delineation to ensure that there is clear, adequate and consistent application of the relevant financial regulation across the EU.”

The comment period is already nearing a close, with participants able to submit their critical feedback only until May 9, 2014.

To access the full story, the Forex Magnates Quarterly Industry Report (QIR) for Q1 2014 is now available, and contains nearly everything you need to know that transpired during Q1 for Foreign Exchange, including looking ahead at the next Quarter that has already begun.