The regulator of Luxembourg’s financial markets, tasked to ensure that the laws and regulations governing the various areas of the financial sector are enforced and observed, has warned that a firm claiming to be authorized by it – is in fact not licensed to carry out business in its country or from within its jurisdiction.

According to the public advisory dated January 8th, 2014, the Commission de Surveillance du Secteur Financier (CSSF) warns the public of the activities of an entity named Bulls Capital Markets under the website bullscapitalmarkets.com which claims to be supervised by the CSSF in Luxembourg.

The CSSF stated to the public that Bulls Capital Markets has not been granted the required authorization to offer banking and financial services in or from Luxembourg and is therefore not supervised by the CSSF.

Forex Magnates’ reporters spoke to a company spokesperson at CSSF’s press office, who said on behalf of the regulator:

“Bulls Capital Markets is not known to us. It is not a company regulated by the CSSF, nor known to have any pending regulatory status here. It is neither registered with the Registrar of Trade and Companies in Luxembourg. The license numbers claimed to represent a CSSF regulated firm listed on the bullscapitalmarkets.com website are fictitious.”

Subsequently, members of Forex Magnates’ research team spoke with a call-center support representative from a phone number listed for Bulls Capital Markets’ Bangalore office in India, as soon as the mention of the CSSF warning was mentioned we were asked to call back in a few minutes, and thereafter were told to contact a Mr. Kartik (mentioned as a “partner” ), while the representative refused to provide a last name for the purported management member of the firm.

After reaching Kartik by phone, the full name given to Forex Magnates’ reporters was Kartik Naramajan (after initially only stating his name as Kartik NS), and denied any awareness of the CSSF warning but was quick to blame a supposed “3rd party” agent that was purportedly used to setup the business — uncovered now as a fictitious status along with the apparent lack of any domiciled entity as per the regulators findings.

An excerpt from the Bulls Capital Markets website cites license numbers that seem totally bogus, as per the findings.

Bulls Capital Markets is registered and licensed in the country of Luxembourg. The registration number is F2589754 and the category F2 license number is 179065.

Bulls Capital Markets does not accept U.S. clients. Regulated by the Commission de Surveillance du Secteur Financier ( CSSF ) of the Grand Duchy of Luxembourg. Registration No. F2589754 | category F2 License No. 179065. In issuing an Investment Dealer License to the Company, the Luxembourg Commission de Surveillance du Secteur Financier does not vouch : ( i ) For the reliability and financial soundness of the products offered or products on which the Company provides it;s services ; and ( ii ) For the correctness if any statements or opinions expressed by the Company. Every person should deal with Company at their own risk and shall not be protected by any statutory compensation arrangement in Luxembourg in any events whatsoever. RISK WARNING : Trading leveraged products such as Forex and CFDs may not be suitable for all investors as they carry a high degree of risk to your capital. Please ensure you fully understand the risk involved before trading, and if necessary seek independent advise

Bulls Capital Markets is one of the group of companies owned by Capital Market Investments (CMI). CMI is a company registered and licensed as a FSP in new zeland […].

The supposed parent company as per the above excerpted website text, Capital Markets Investments (CMI),  is listed as a New Zealand entity, and filed as doing business under the categories of keeping, investing, administering, or managing money, securities, or investment portfolios on behalf of other persons, as per information on business.govt.nz.

The entity is also filed as entering into or trading on an exchange, in an over-the-counter market or otherwise, the following on behalf of another person, according to its corporate filings on the government website, including purported: 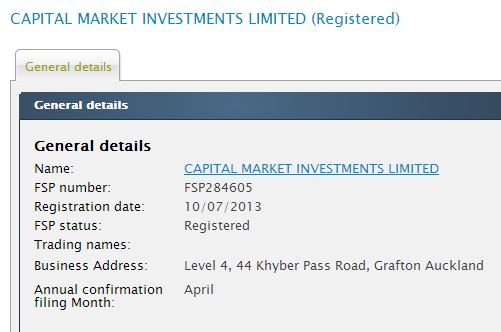 Share this article
Tags: regulation / traders
Got a news tip? Let Us Know