New Zealand’s financial services regulator, the Financial Markets Authority (FMA) has today released its annual report on actions that it has taken relating to enquiries and complaints.

The majority of these contacts related to people or entities providing financial advice, securities issuers, and foreign exchange dealers.

Over the last 12 months FMA’s enforcement team has been actively engaged in 97 inquiries and investigations and 18 litigation matters. These enforcement activities have involved a wide range of issues, falling within the following categories:

Fraud and other Crimes Act offences

The Financial Markets Authority Act 2011 (FMA Act) gives FMA the power to monitor compliance and investigate conduct that constitutes, or may constitute, a contravention of the FA Act and Financial Service Providers (Registration and Dispute Resolution) Act 2008 (FSPA), and to enforce this legislation.

Such monitoring is currently being done manually, however such a law, combined with the regulator’s wish to strengthen its supervisory powers, emulates that of Australia’s regulator, ASIC, which implemented First Derivatives’ Delta Stream surveillance system which has resulted in successful prosecutions of Australian firms for compliance-related irregularities.

The Financial Service Providers Association (FSPA) requires financial service providers to be registered. FMA’s initial perimeter focus included making enquiries into individuals who appeared to be non-compliant with the FSPA by, for example, providing advice as a financial adviser without being registered. Earlier this year, the FSPA unregistered over 250 firms following a mandate being issued that all firms listed on the FSPA should be based in New Zealand, with a New Zealand-based physical office with operations and compliance based within the jurisdiction.

The FMA announced that it had concerns about some of the offshore entities that do not have a place of business in New Zealand, offering financial services. While FMA currently has no direct jurisdiction over this conduct, the regulator will examine the structures and circumstances in each case to determine whether the particular matter involves products that may be brought within the regulatory scheme. In certain cases the FMA have issued warnings to ensure that investors understand that these products are not regulated.

Included in the report was also the regulators stipulation that it intends to continue to undertake proactive surveillance projects to ensure market participants are not providing financial services, such as property investment seminars and services or money management services, without being qualified to do so. It was not published as to whether the use of copy trading platforms or expert advisers is due to fall into this category.

The following table summarizes secondary markets matters dealt with by FMA for the period between July 1 2012 and April 1 2013. 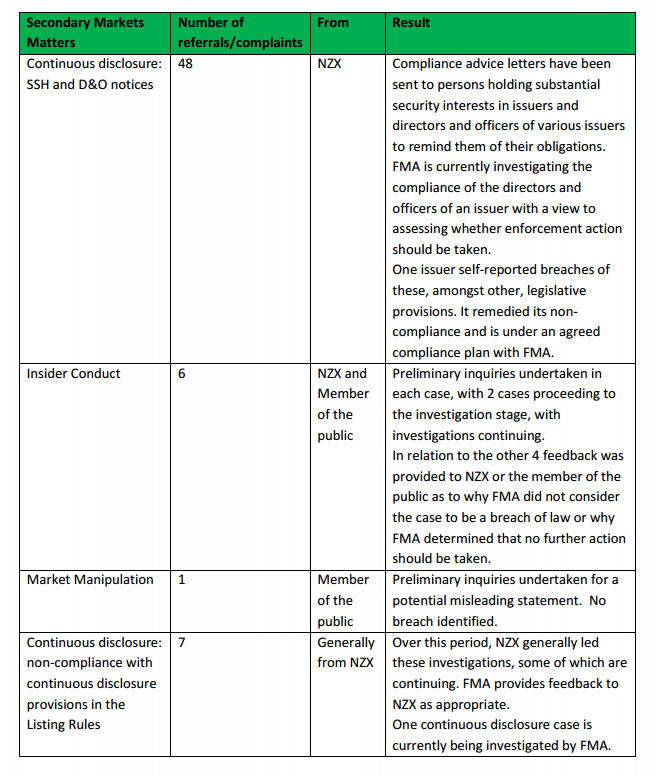 Over the last 12 months, the scope of FMA’s enforcement activity has broadened and new powers have been used in our investigation work. The key theme emerging from our work is the need for participants to continue to strive to meet the technical legal requirements, but also act in a way which will raise professional standards, maintain market integrity and restore investor confidence.

It is important to note that in the majority of cases market participants do willingly comply with their obligations.

Investors rely on market participants to act with integrity in their dealings with them. This integrity is crucial to building customer trust and confidence, promoting the long term success of participants and growing New Zealand’s capital base. The regulators expect participants to make customers’ interests central to their activities.

At the same time, investigation activities have identified the need for investors to take responsibility for their financial decisions. The FMA announced that it will work with other agencies to make information available to help investors better understand risk and make informed decisions.

As New Zealand’s regulatory relationships continue to mature, FMA looks forward to working with participants to bring about higher standards of conduct and willing compliance, while ensuring a timely and proportionate regulatory enforcement approach.

Interestingly, the behavior of FX companies in New Zealand has either been exemplary, or any misdemeanors have avoided attention from the regulator, as there have been no prosecutions brought against FX firms, an interesting result when bearing in mind that the regulator stated in the report that a number of enquiries and complaints received were in relation to foreign exchange dealers. One possible reason for this mismatch could be the diminishing presence of FX companies in New Zealand.

Many firms saw it as a very good strategic location from which to approach the Asia Pacific markets, due to what was at one time a very easy, largely uncomplicated regulatory structure. With the tightening of rules, the most recent of which is a new Anti Money Laundering (AML) ruling, a lot of companies, including large, major firms such as Alpari, has removed its offices from New Zealand. There are other factors which could factor in such moves, such as New Zealand’s ongoing government talks regarding the possible passing of a law allowing the country to impose a Cyprus-style haircut on bank deposits.

It will be interesting, bearing these matters in mind, as to whether FX companies in the Asia Pacific region will pack up and move to Hong Kong or Singapore, given their very strong financial markets economies and high number of FX market participants.