The not-for-profit Financial Industry Regulatory Authority (FINRA), who oversees  some 4,135 of its member firms representing over 150,000 registered representatives, and a total of 532,054 brokers, has today announced an investor alert to the public at large within the U.S. and thus cautioning over 300 million Americans of the risk of bitcoin investments.

As numerous regulatory authorities, central banks and other authoritative organizations have recently announced their stance on Bitcoin, including its legality or lack thereof within their respective jurisdictions, as well as various warnings concerning the risks of digital currencies, FINRA is the latest to make such an announcement.

The independent non-governmental agency today issued a new investor alert called “Bitcoin: More than a Bit Risky” with the “Bit” reference appearing as a pun intended, as the agency emphasized the risks that trading bitcoins poses to investors.

The allure of digital currencies has also lured victims into traps as fraudsters look for the next best thing to exploit using bitcoin as their latest vehicle.

Bitcoin Platforms under the Alert

In the alert, FINRA said that in addition to the speculative risks related to price volatility, there is also the risk of fraud related to firms claiming to offer bitcoin payment platforms and other bitcoin-related products and services.

Despite the risks, as the interest in digital currencies has skyrocketed evident by the widespread media attention on related developments, several foreign exchange online brokerages have launched related products to capture this building wave of cyrpto -currency enthusiasm.

FINRA’s Investor Alert was described by the regulator as having been added to a growing chorus of Bitcoin-related warnings from other regulators, and how the threat of Bitcoin-related fraud is a real danger for investors looking to make a quick profit from Bitcoin.

For example, on February 19, 2014, the SEC suspended trading in the securities of Imogo Mobile Technologies Corp, which had announced testing of a new mobile platform for Bitcoin a few weeks earlier, as per the press release.

The regulator has seen a decline in the number of its regulated members as fierce competition among participants have caused an exit for some brokers not able to handle the pressure including the costs of doings business in the U.S.

Last year, via its 3,400 employees dedicated to market integrity and investor education, and from 20 offices across the U.S., FINRA referred 660 fraud cases for prosecution, and $74.5M in fines and restitution were levied against fraudulent traders in 2013.

The regulor also launched a data analysis tool, and the agency monitors some 6 billion share trades every day, as per data listed on its website. 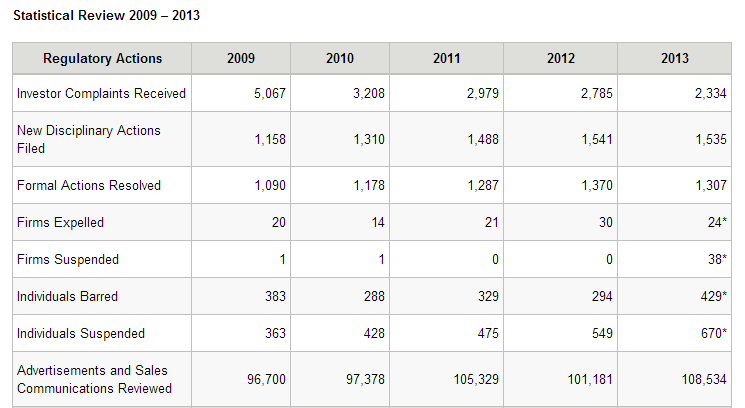 In addition, after the wave of regulation that blanketed Wall Street firms following Dodd-Frank, meeting regulatory obligations and capital requirements have been too big a compliance challenge for some regulated broker-dealers. The above chart shows the numbers, including regulatory actions that FINRA took against some of its member for related member violations.

Ms. Walsh added regarding the advent of fraud, “Investors looking to get in on the ground floor of a Bitcoin-related company should realize that fraudsters may see the latest digital currency trend as a chance to steal their money through old-fashioned fraud.”

In addition to a warning, FINRA published a more detailed review of Bitcoin and discussed many of the risks associated with buying and selling Bitcoin.

As recent events make clear, “Platforms that buy and sell bitcoins can be hacked, and some have failed”, the press release read, indirectly citing the demise of Mt.Gox, which has recently filed for bankruptcy protection in Japan.

In addition FINRA added how unlike U.S. banks and credit unions that provide certain guarantees of safety to depositors, there are no such safeguards provided to bitcoins residing in so-called “digital wallets.”

Some of the risks of Bitcoin included in the udpate from FINRA today, were listed as follows in the official press release:

There are a number of exam priorities that FINRA said it had in the beginning of the year for 2014, including enhancing suitability determinations that firms make, with guidance provided in regulatory notice 13-31.

In addition, FINRA added that some of its other exam priorities included reviewing Cyber Security to help ensure that firm’s policies and procedures and the security of their infrastructure will suffice to protect sensitive customer data against hackers and any resulting cybertheft or unauthorized access.

Other priorities included AML and Best-execution, Algo & HFT and Trading Programs, as well as recidivist brokers who follow a pattern of complaints or sale practices abuses – in order to swiftly investigate against them.

And they are more than a bit slow!