The European Parliament has voted today to implement tougher punishment to violators of insider trading rules and for market manipulation. This is related to 2011 proposals, and the rules were approved based on a landslide majority vote with further approval still needed from the Council of Ministers, according to an official EU press release.

The approved rules under the proposal are aimed at making certain financial market regulatory violations that are typically construed as civil offenses into actual criminal offences, in all EU countries and punishable with minimum jail sentences of four years.

Further significant changes were included to curb market abuse, under the previously proposed Market Abuse Directive (MAD), including a ban on proprietary trading that will affect some of the 30 largest banks, announced last week.

Such changes could have significant impacts on Foreign Exchange flows, among other OTC and listed securities, with regards to proprietary trading bans, along with the compliance severity of criminal charges in what’s now mostly white-collared civil cases settled in cash, soon to be paid in years of prison -if such changes are adopted by each member state. The new rules were approved by 618 votes to 20, with 43 abstentions.

“Today’s vote is a big step forward in enabling courts across the EU to halt market abuse. This is the first law to introduce tough EU-wide criminal penalties for market abuse,with a minimum jail sentence of 4 years for serious offences such as insider dealing and market manipulation. The LIBOR scandal may not be the last – allegations of market manipulation are now emerging in the oil, gas and foreign exchange markets, too,” said Economic and Monetary Affairs Committee rapporteur Arlene McCarthy (S&D, UK), who steered the legislation through Parliament, as described in the EU press release.

Member states would remain free to set or maintain tougher criminal law penalties for market abuse than those laid down in these rules, according to an official press release following the plenary session. Next steps included how once the draft rules are formally approved by the Council of Ministers, member states will have 24 months to put them into effect.

“Criminals who get rich by manipulating markets and insider dealing should not get away with just an administrative penalty. I am proud that my proposal of at least four years’ imprisonment for these offences made it into the final text. Ensuring that justice is seen to be done will help to rebuild our citizens’ trust in financial markets. We have enabled the authorities prosecute such crimes more effectively, both by providing training and resources for their staff and by making it possible to extend jurisdiction where necessary to deal with cross-border crime,” said Civil Liberties Committee rapporteur Emine Bozkurt (S&D, NL), commenting in the official press release.

Under the new rules, the definitions of offences and the penalties applied for them would be harmonised, across member states. Market manipulation offences punishable by a four-year jail term would include entering into a transaction or placing an order which gives false or misleading signals about the supply, demand or price of one or more financial instruments or providing false or misleading inputs to manipulate the calculation of benchmarks, such as the London Interbank Offered Rate (LIBOR) or Euro Interbank Offered Rate (EURIBOR), provided as an example in the official press release.

Insider dealing offences punishable by four years’ imprisonment include those in which inside information is used with intent to buy or sell financial instruments or to cancel or amend an order. The latter of which could be applicable to HFT, as order cancellations or flash orders have been attributed to often affecting market prices in an unfair way.

The intent to upgrade certain regulatory violations from civil to criminal including Insider Dealing (aka Insider Trading) and Market Manipulation – were proposed in a 2011 recommendation, as noted below.

The council agreed informally regarding the proposed rules and held a press conference at 3:30 Brussels time, in addition, the Strasbourg held meeting today aimed at significant reforms of EU banks, namely the largest of which that would be affected, surrounding a restriction on proprietary trading, after the similar Volcker rule went into effect in the US recently.

Under the changes, trading for a bank’s own proprietary accounts with the sole purpose of making a profit for the bank would be banned. The news follows previous announcements last week on the proposals under the Market Abuse Directive, aimed to lessen systemic risk and improve market integrity.

Too Big to Fail, Too Costly to Save, Too Complex to Resolve 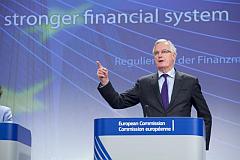 Michael Barnier, Commissioner of Internal Market and Financial Service at the European Commission spoke during a press conference last week, and aside from most of the speech spoken in the French language, the Commissioner said in English, paraphrasing the American-coined term (Too Big To Fail) during the 2008 financial crisis, “Too big to fail, too costly to save, and too complex to resolve,” providing an analogy as to why the new changes must be implemented in order to help avert such a crisis from reoccurring.

For example, an official European Commission press release from last week said the changes were aimed to help ensure taxpayers do not end up paying for the mistakes of banks, such as during the financial crisis when publicly funded bank bailouts swallowed around 13% of the EU’s gross domestic product.

The EU also wants to introduce measures to ring-fence banks’ low-margin, but largely safe, retail operations from their potentially riskier investment divisions, according to the press release description. This would ensure the safety of depositors’ savings and prevent the need for any further bank bailouts, adding to the above mentioned measures aimed at strengthening the EU’s interconnected system.

Under the plan, national supervisors would be given the power to transfer the high-risk trading activities of selected banks – such as market-making, mortgage securitisation and investments in complex derivatives – to separate subsidiary companies. Reference to shadow banking was also made by Commissioner Barnier during the speech he made in French.

According to the description, the proposal on structural reform of EU banks will apply only to the largest and most complex EU banks with significant trading activities, and includes the following:

The proprietary trading ban will apply as of the 1st of January, 2017 and the effective separation of other trading activities will not be compulsory before the 1st of July, 2018, according to an official description on the EU website.

The plans to ban proprietary trading and implement more severe punishment for insider trading and market manipulation, was originally announced in 2011, and part of a proposed directive under 2011/0297(COD), of section 3.3.(Detailed explanation of the proposal) included 3.3.1. for Criminal offences, and Article 3 in conjunction with Article 2 of the proposal defines the market abuse offences which should be regarded as criminal offences by Member States and therefore be subject to criminal sanctions, as described.

Two forms of market abuse conduct, namely insider dealing and market
manipulation, should be regarded as criminal offences if committed intentionally, according to the 2011 document. Also noted was, the attempt to commit insider dealing and market manipulation should also be punishable as a criminal offence. The offence relating to inside information should apply to persons who possess inside information of which they know that is inside information […]. A full copy of the 2011 proposed directive is available on the EU site, along with the official press release.

Share this article
Tags: eu / regulation
Got a news tip? Let Us Know

“Too Big to Fail, Too Costly to Save, Too Complex to Resolve” classic quote.