When it comes to analyzing the economics of technology companies and their businesses, there are very few people that can ‘tell it as it is,’ like founder of software firm 37signals, David H. Hannson, or better known as DHH. Focusing on fundamentals, DHH is quick to point out that what really matters are profits, and not revenues and user metrics (he’s not a big fan of Amazon’s business model). Another one of his theories is that when you break it down, successful companies really only have one to three main products. Case in point is Google, where profits are driven by search, with items like YouTube and Gmail simply being products to gain more user data as well as increase ad placements. Similarly, for everything that Microsoft has tried to launch over the last 20 years, their only two blockbusters are Windows and Office.

The lesson learned is focusing on a single product that solves a problem, and doing it better than everyone else is a proven model. Following on this path has been an explosion of apps, that when you first hear about them sound too simple to become successful companies, as they are only solving one problem. Examples are Evernote, which was created so its owners wouldn’t forget stuff that was important to them. Similarly, cloud-based storage has been around for a while, but it wasn’t until DropBox and Box came around and made it easier to use and collaborate with, that the sector took off.

Aiming to offer one tool for traders, but to do it really well is today’s New Product Spotlight, Traido. At its core, Traido lets users draw technical indicators on charts, and receive SMS and email alerts if prices trade above or below these indicators. The product takes the well-known ‘price alert’ feature, which is available on nearly every trading platform and expands it to charts. As a result, alerts are able to be applied to any technical indicator or chart drawing. For example, users who add a Bollinger band can elect to be alerted every time prices trade above or below the upper and lower bands. Similarly, after adding trendlines, alerts can be generated when trends are breached (see image).

Learning the idea behind the company, Traido CEO, Ravid Paldi, explained to Forex Magnates that the alerts based on technical indicators were, “Products we wanted to use but didn’t find them, so we built them ourselves.” He added that the product is aimed at traders who have jobs and stated, “We are creating apps to help these traders who don’t have the same resources as professional traders.”  Overall, Paldi’s goal with Traido and its simple to understand and use interface, is to “change the way casual traders interact with the market.” 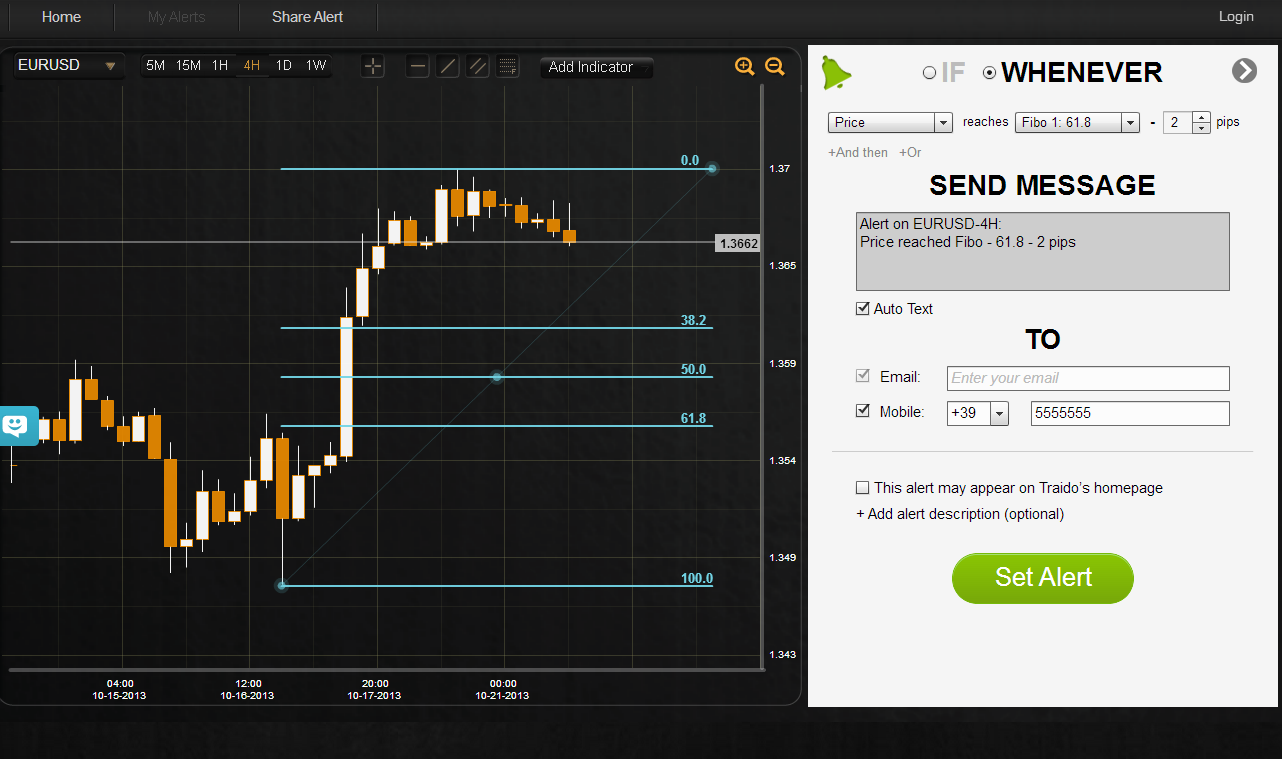 To gain feedback and discover whether other traders had similar needs as Paldi, Traido partnered with ForexLive.co.il. The forum of Israeli-based traders integrated the product within their website to make it available at no cost to users. Among the findings of ForexLive’s traders who had tried the product, was that over 60% used the alerts more than twice a week, with an average session duration of 16 minutes. Paldi also reported that user feedback was positive, with many traders citing the product’s flexibility and ability to trade via SMS notifications, instead of relying on automatic systems to operate correctly.

Taking the product further, Traido is currently working on integrating their product as an app that will be available on third party platforms to be included in their app marketplaces, or through brokers purchasing licenses to offer the chart alerts to their clients. In addition, Traido is involved in expanding its relationship with forex trading portals to offer the product and alerts to readers. Currently, the firm is in late stage integration with FXStreet, whereby their analysts will use Traido to publish alerts directly to their news feed across multiple languages.

Expanding the product’s features, Traido is working on social features. For example, traders can share their alert ideas on a public stream, where other users can elect to follow and also be notified when price changes take place. The model can also be applied to traders with their own communities who can use Traido’s technology to distribute signals and trading ideas.

Overall, while expanding its distribution and where traders can access the technology, at its core, Traido remains simply a technical analysis alert tool. But, its simple interface and blending of the mobile and wired are why it works. On this account, Paldi explained that the long term goal for Traido is to become “an integrated tool that facilitates the entire trading process of casual traders whether they are at home, at work, or picking up their kids from school.”

Traido will be presenting their alert system at the upcoming Forex Magnates London Summit in the Elevator Pitch session.

Share this article
Tags: fxstreet / startup
Got a news tip? Let Us Know