Earlier this year, we wrote about TradeSlide, and its system of rating traders and providing analytics and tips for them to become better traders. Using a similar, but different approach is BestStock. Unlike Tradeslide, where users connect their accounts to the product, BestStock grades trade ideas. With BestStock, users share their trade ideas, providing buy/sell recommendations, rationale behind the trade, timeframe, and price targets. Trades are then analyzed to calculate their performance. In a way, BestStocks can be compared to a combination of StockTwits and SeekingAlpha, that is integrating with a trade grading feature.

According to the company, the product aims to analyze more than just the ultimate percentage performance of the trade idea. The grading is done via what BestStock calls their “alpha capture system”. According to BestStock, “The term alpha capture refers to the aim of such systems, to help investors find market-beating returns on investments. For example, a trade idea might be live for 100 days and be profitable. However, traditionally, if that idea lost money for 99 days and on day 100 made up for those losses, it would be considered a success. “

The company though, believes that such an approach is flawed. Explaining to Forex Magnates the problems with focusing strictly on performance, Nico Black, BestStock Founder and CEO, stated to Forex Magnates that “We expect analysis to reflect not incidental fluctuations in stock price (lose 99 days, profit day 100), but a core understanding of value investing. The money you wasted in non-providing returns for 98 days, should have been put to better use somewhere else. An analyst should have posted a buy/sell recommendation on day 99, with expecting profit moving forward from 100 onwards. This is how our rating rewards analysts, for fundamental, not technical analyses.”

As a result, BestStock utilizes a grading system that looks for daily open and close rates, growth/decline trajectory and investment time frame. Based on those parameters, they produce a grade range included, that allows the investor to focus on the top performing ideas and analysts in turn. 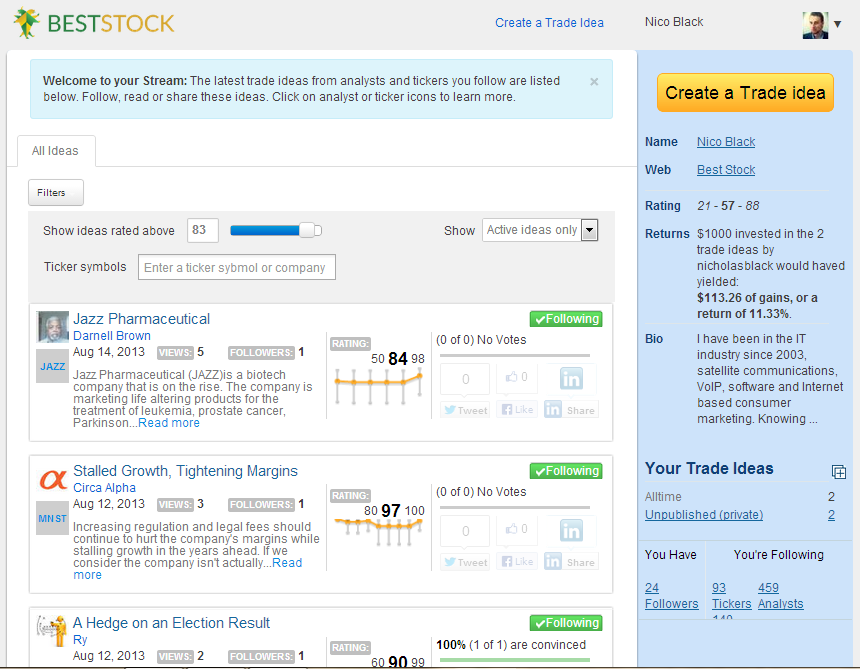 Leveraging its rating system, one of BestStock’s goals is to become a destination for investors to find qualified analysts and traders. Part of this plan includes the rating of analyst trade ideas from third-party investment websites. In addition, Best Stock is creating a virtual ‘Newsletter Marketplace’. Looking to replace the existing fragmented sector of investment newsletter services, BestStock will soon be allowing users who receive high grades to ‘lock down’ their ideas and sell subscriptions to their analyst. Analysts are also able to create profiles to promote their backgrounds and services to prospective subscribers.

In this regard, BestStock considers it part of a small, but growing group of startups such as WealthFront, MotifInvesting and YCharts, that are bringing innovation to the retail investing space.