Stock splits tend to happen when a company’s shares rise and a decision is made to issue new ones to the existing holders to reduce their trading price. The stock split itself doesn’t affect the value of a company, as there is no difference whether a firm has a 1,000 shares valued at $50 or 500 at $100. But, splits are still done to keep share prices more or less in line within ranges of the general market.

Every now and then, a firm undergoes a reverse stock split. In this situation, a company converts multiple shares into one share. Typically, this is only done after a company’s stock price has fallen hard and the firm uses the reverse stock split to boost the trading value of each share. Among the most famous examples was the 2011 1 for 10 reverse split by Citigroup. At the time, shares of Citigroup were trading at $4, and following the reverse split, jumped up above $40. The value of the company remained the same, but by reducing their available float of shares by 90%, the price of Citigroup’s stock inversely rose by 900%.

There are a variety of reasons to apply a reverse stock split to increase the price of a company’s shares. In Citigroup’s case, the bank had finally gotten back on its feet following the global financial crisis of 2008/09 that arguably would have led the firm to be insolvent if it weren’t for government assistance. As such, with Citigroup being able to repay its government loans and reinstating a dividend, they wanted their share price to reflect that of a healthy bank, and not a speculative penny stock. 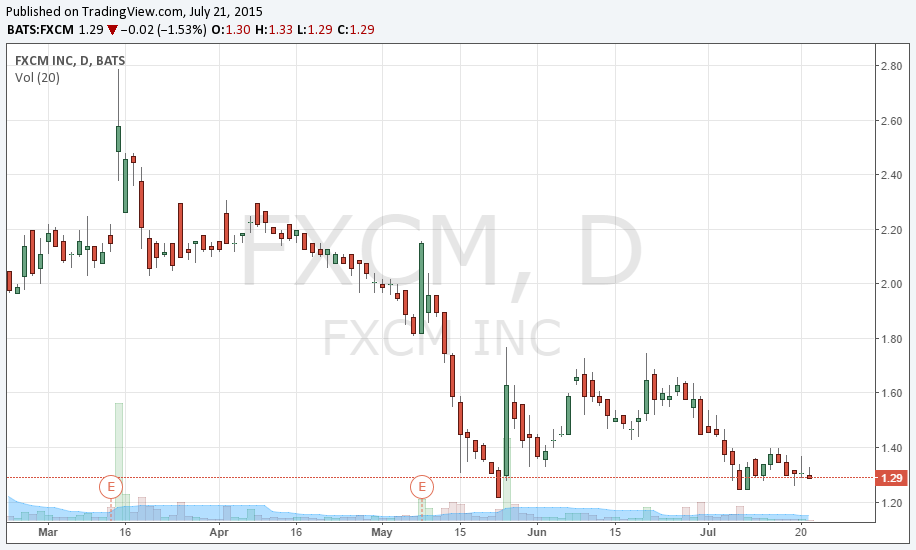 While reverse splits provide cosmetic benefits to a firm’s image, they are usually also done for operational reasons, such as to avoid a delisting from a major exchange. In this regard, after seeing its shares currently languishing below $2 since May and at a current $1.29, embattled broker FXCM has announced that they intend to issue a 10 to 1 reverse stock split. Approved today by FXCM’s board, the stock split will be brought up for shareholder approval in a special meeting on September 21st.

Explaining the decision to apply a reverse stock split, FXCM CEO Drew Niv cited the firm’s goal of continuing to be listed on the New York Stock Exchange (NYSE). According to rules of the NYSE, a firm’s shares can be delisted if its price falls below $1.00 for 30 consecutive trading days. While FXCM is currently above that threshold, Niv stated, “The NYSE requires certain standards be met to continue as a listed company on its exchange, and while we currently satisfy all of those obligations and do not anticipate that changing, a reverse stock split will only serve to help strengthen our status and protect the company and its shareholders.”

Share this article
Tags: fxcm / nyse
Got a news tip? Let Us Know