Shares of FXCM were on the decline yesterday following trader reaction to the broker’s after-the-close release of their operating metrics on Tuesday. Included with the December volume numbers was also Q4 guidance for their retail forex trading division. Guidance of revenues per million dollars traded was lowered to around $70 from the $75-$80 range the broker had initially forecast to investors. Reacting to the news, shares of FXCM ultimately closed yesterday down 10.96% to $14.87 on an overall weak day for US stocks.

At the time of the pricing plan release, Forex Magnates speculated that FXCM would benefit from increased volumes in those markets, as reduced spreads have shown to directly correlate to higher customer activity. The question though was whether the increased volumes would mitigate the margin compression of these trades due to the lower pricing structure.

Initial performance has shown the reduced pricing structure to be accelerating volumes. According to FXCM, volumes in markets with the reduced pricing experienced quarter-over-quarter growth of 76%, compared to a 23% improvement in other markets and an overall increase of 40% for the broker. The more than tripling of growth in the low-spread regions related just how much reduced costs are correlated to volume increases. (One note is that Japan is included in the lower cost markets, with the country outperforming all regions in Q4. Therefore, the 76% growth may be vulnerable to a decline or smaller gains in Q1 2015.)

Despite the volume increase, retail revenues are set to underperform for Q4. Using FXCM’s estimates of $70 per million dollars traded, the broker is headed to achieve $95.62 million in retail trading revenues for Q4. This represents only an 8.9% increase from Q3 levels, despite overall volumes growing by 40%.

In regards to coping with the reduced margins while maintain revenue growth, Forex Magnates reached out to the broker. A company representative referred us to yesterday’s prepared remarks as their official response. Those statements relate that FXCM believes the revenue shortfall could be a unique situation where traders were attracted to the less profitable yen in Q4. Statements also showed they were bullish on the reduced spreads leading to the continued volume growth.

The statements appear to show that FXCM is embracing the low margin/high volume formula and is rolling the dice on overall activity growing enough to mitigate the margin compression. The question remains whether this model will ultimately result in higher profits and revenues. So far, this doesn’t seem to be the case. In addition, having different pricing structures per market may also lead to confusion among traders, as more active satisfied customers with higher trading costs would be expected to seek decreased spreads as well.

Interestingly, FXCM’s retail forex strategy contrasts with that of other products. Examples are CFDs where the broker is working on launching single stock CFDs as well as increasing marketing for non-forex retail products as they provide fatter margins. In addition, within their institutional business line, FXCM has acquired stakes in service-based companies to assist them in marketing towards higher-touch customers. 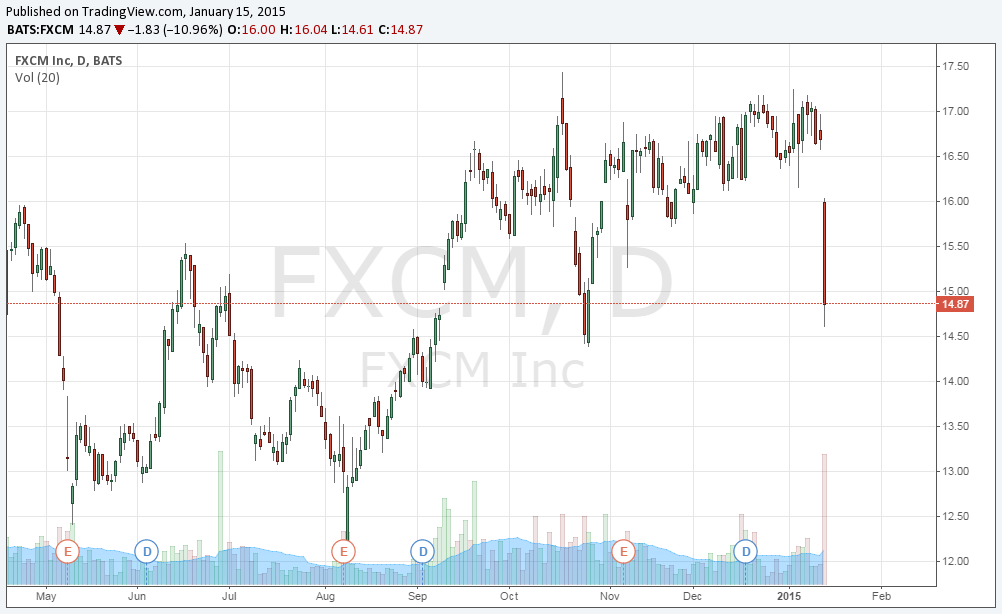 Answering whether yesterday’s selloff is overdone, the drop does appear to be inline as shares of FXCM had rallied about 30% higher from their summer lows as the forex market began to heat up in September. As such, shareholder expectations for Q4 may have been slightly higher than just an 8.9% jump in retail revenues. Overall, the revenue shortfall and inability of FXCM to fully mitigate its margin cut with higher volumes puts the broker in a “show me” state for 2015, which should keep prices volatile until there is greater clarity about how their new business model operates.

It doesn’t make sense to compare the numbers of Q4 with Q3 in order to proof that their new pricing model increased the volume. Everyone knows that volume in Q4 in general is higher than in Q3.

Moreover, I don’t know why FXCM believe that pricing is everything. I don’t want to trade or increase my trading activities just because it’s cheaper now… I wanna trade because there is a good trading opportunity.