With the official announcement that Greek banks are going to reopen for business on Monday, Saxo Bank has taken the decision to reduce the margin requirements on some major currency pairs and stock indices which it marked up as the turmoil began a couple of weeks ago.

The European Central Bank has once again increased the Emergency Lending Facility (ELA) for Greek banks and those are expected to be open for business on Monday morning.

Since the start of this week as a deal between Greece and its creditors has been signed the European equity markets have been on a tear, while the euro resumed its downward trend.

A number of punters have been expecting the single currency to rally, however that has been quite counterintuitive when lined up against the typical risk-on and risk-off scenario. The euro has become a funding currency in so called ‘carry trades’ since the last quarter of 2014 as the ECB pledged to support the ailing European economy and introduce quantitative easing.

Carry trades are used by investors to realize gains by borrowing funds in a currency where financing is lower and invest the money into assets which are likely to provide a higher rate of returns.

Saxo Bank has aimed to limit the risks for traders and for the bank as volatility on the markets increased. The primary cause for the rapid indices and currencies moves has been the uncertainty caused by the technical default of Greece to the International Monetary Fund (IMF) at the end of last month.

The reduced margin requirements include a number of major indices and currency pairs. 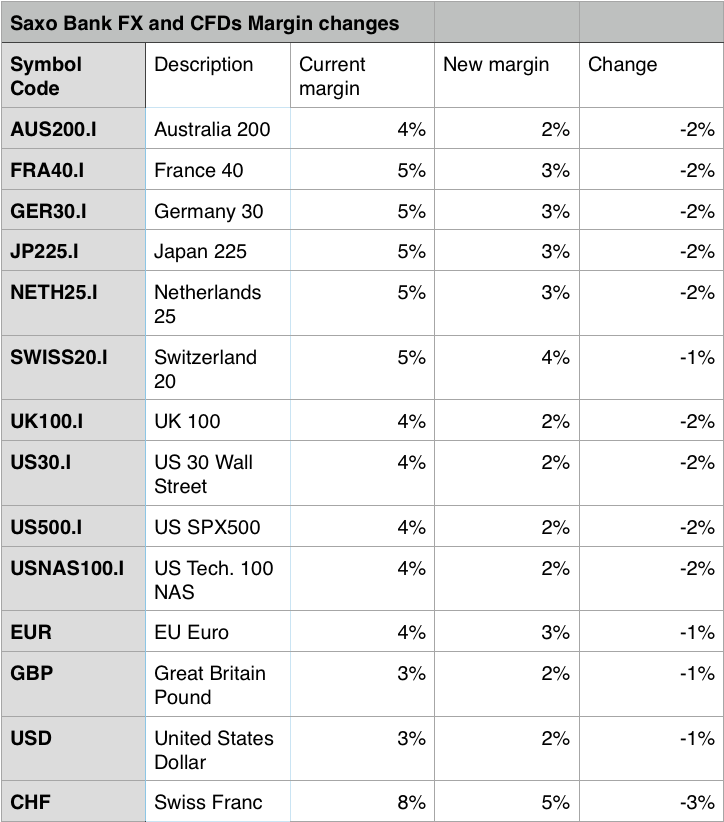 In the aftermath of the extreme volatility induced by the Swiss National Bank’s (SNB) decision to scrap the exchange rate floor under the EUR/CHF currency pair a number of brokers have become more vigilant about the exposure of their clients.

Saxo Bank has reported a loss which could total up to $107 billion as a result from the massive squeeze lower in all Swiss franc pairs which left the bank’s clients in the red with negative balances. It has subsequently substantially increased margin requirements for its clients. A number of other brokers across the industry have suffered greatly with FXCM getting a bailout from Jeffries in what has been deemed as a predatory deal by some pundits.

The SNB induced black swan has affected the foreign exchange industry in a massive way, causing a slew of changes in risk management practices across the forex industry.

As we can see on the table above the margin requirements at Saxo Bank have been fairly conservative when compared to the rest of the industry. This brings a higher level of security to the clients of the firm, while eliminating substantial risks for the brokerage.

A number of retail clients are misusing margin which is the primary reason for substantial losses on their accounts. It is typical for a retail trader without much knowledge of the market to get levered up and use as much as 90 percent of his/her equity to make leveraged bets. This has been deemed by industry experts as the biggest reason why the majority of retail traders are on the losing side in the long run.

Major indices margin requirements have been reduced by 2 points in most cases as the chart above shows. At the same time, the figure on the euro currency remains at 3 percent, a level which is still consistent with recently elevated volatility.