Saxo Bank, a multi-asset brokerage, has published its interim report for the first half of 2018 on Thursday. At odds with the strong performance seen by many forex brokers so far this year, the broker reported a slump in earnings during the six months ended June 30, 2018.

During the first half of the year, Saxo Bank experienced a loss in nearly all of its key areas. The broker has attributed this loss to the implementation of its new pricing structure. 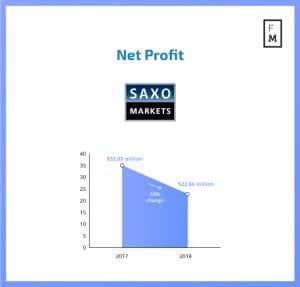 Net profit experienced one of the biggest losses in the first half of this year, coming in at DKK 150 million. This is down around 53 percent from the same period in 2017, which had a net profit of DKK 229.5 million.

Operating income for the first half of 2018 fell by around three percent to DKK 1.5 billion. In 2017, the broker reported an operating income of 1.56 billion in the first half. EBITDA was also down for the broker by 24 percent when compared to the same period in 2017, coming in at DKK 398 million. Adjusted EBITDA fell by around 28 percent year-on-year.

Commenting on the results, Kim Fournais, the CEO and co-founder of Saxo Bank, said: “The results reflect the low levels of volatility across financial markets that have marked the first half of the year. Another contributing factor is the introduction of a new and more transparent pricing structure that lowers prices significantly across asset classes in several key markets.”

“Despite an immediate impact on income, it has resulted in an increase in new trading clients and reaffirms our long-term growth strategy of competing on product, platform, price and service.”

However, the broker has had a busy year with increasing its investment offering. In June, Saxo Bank announced that it had added China A-Shares to its investment platform. In addition, in April, the Danish broker also launched a new trading platform that caters to institutional investors, SaxoTraderPRO.

As a result of the continuous investments in its core offering and an increase in staff costs, administrative expenses increased in the first half by three percent year-on-year to DKK 1.1 billion.