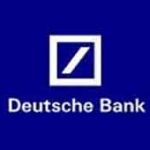 Deutsche Bank, a leading investment banking institute, has filed that it has increased its shareholding of UK-listed broker-dealer Plus500 to 7.23% from 5.38%.  Similar to other ownership filings of Plus500 by banks and asset managers, the 7.23%  stake is primarily held on behalf of the bank’s customers who have become more bullish on the prospects of the broker.  The interest in the broker occurs as Plus500 was one of the winners following the Swiss franc’s volatility last month.  The broker was one of the few large online brokers to announce that they had profited from the franc’s move following the Swiss National Bank’s removal of a peg on the EURCHF.

Deutsche Bank joins JP Morgan as the second major global bank that holds equity in the CFD provider of behalf of their clients. Deutsche Bank first engaged in business through share ownership, which was reported in a filing dated the 3rd of February, with the bank purchasing the shares on the 29th of January.

Deutsche Bank increased its stake from 6,183,975 to 8,308,420, thus extending its holding from 5.38% to 7.23%. A number of high profile institutional asset management firms have stakes in the company, including Odey Asset Management, Investec, Newton Asset Management and Old Mutual Global Investors. Odey Asset management is the largest institutional investors, according to Plus500’s website, as of the 31st of July 2014, Odey held 12.91% of shares in the company.

Plus500 has been an attractive purchase for investors; according to the company’s financials, its net profit margin has been increasing YoY since the firm went public on the London AIM market. In 2013, revenues reached $115 million with the firm reporting a net profit of $50.6 million. Plus500 offers access to a number of financial instruments; the firm developed its own proprietary technology and has a vast affiliate partner base. In its H1 2014 presentation, the firm states that it intends to develop new geographies.

Plus500 is a relatively new firm in the UK broker-dealer space; the firm provides extensive details of its history and background on its website in a bid to enable existing and potential investors to be aware of the brand.

The firm states that it maintains a strong relationship with its shareholders, according to the firm: “The Company encourages the participation of both institutional and private investors. The Chief Executive Officer, Mr. Gal Haber, and VP Business Development, Mr. Elad Even-Chen, meet regularly with institutional investors, usually in regard to the issuance of half and full year results. Communication with private individuals is maintained through the Annual General Meeting and the Company’s annual and interim reports.”

Plus500’s positive achievements have benefited the performance of certain investment funds. Newton reported positive results of its benchmark UK fund; on the 31st of December 2014, the Newton UK Opportunities Fund produced 9.61% positive returns in its sterling income. The firm outlined: “The Fund significantly outperformed its comparative index and peer group over the quarter. The central driver of performance was the continued weakness in commodity prices.

Owning no mining stocks, largely given our concerns about the Chinese growth outlook and the resilience of these companies’ business models, was a significant boost to Fund performance. Also helpful was not owning the oil majors Royal Dutch Shell, BP and BG. Of the Fund’s holdings, we saw significant value gained from positions in Plus500, the online platform for securities trading, and MoneySupermarket, the comparison website. The Fund also benefited from a recovery in sentiment towards Intermediate Capital, the mezzanine-debt provider. Other positive performers included Booker Group and Synergy Health.”

Share this article
Tags: brokers / deutsche bank / plus500
Got a news tip? Let Us Know