OANDA has officially announced the release of its fourth generation fxTrade Mobile trading application for Apple’s iPad. The new version provides various new features and a complete redesign which is optimised for a tablet experience. Forex Magnates’ reporters got the opportunity to speak to the company’s Mobile Product Manager, Reuben Piryatinsky, to find out more about OANDA’s plans for developing its mobile technology.

The main feature which stands out is to fully customise the quantity of charts displayed on the screen and the size of the windows displaying it. The experience therefore allows for a much more similar approach to chart windows as on a desktop platform, and provides the user with full control over the position of every single chart. In our view, the overall experience of the new fxTrade Mobile is very well optimised for the iPad, and while we haven’t had the chance to test it on older devices, it works seamlessly on the latest generation of Apple’s tablet and displays several charts at once. 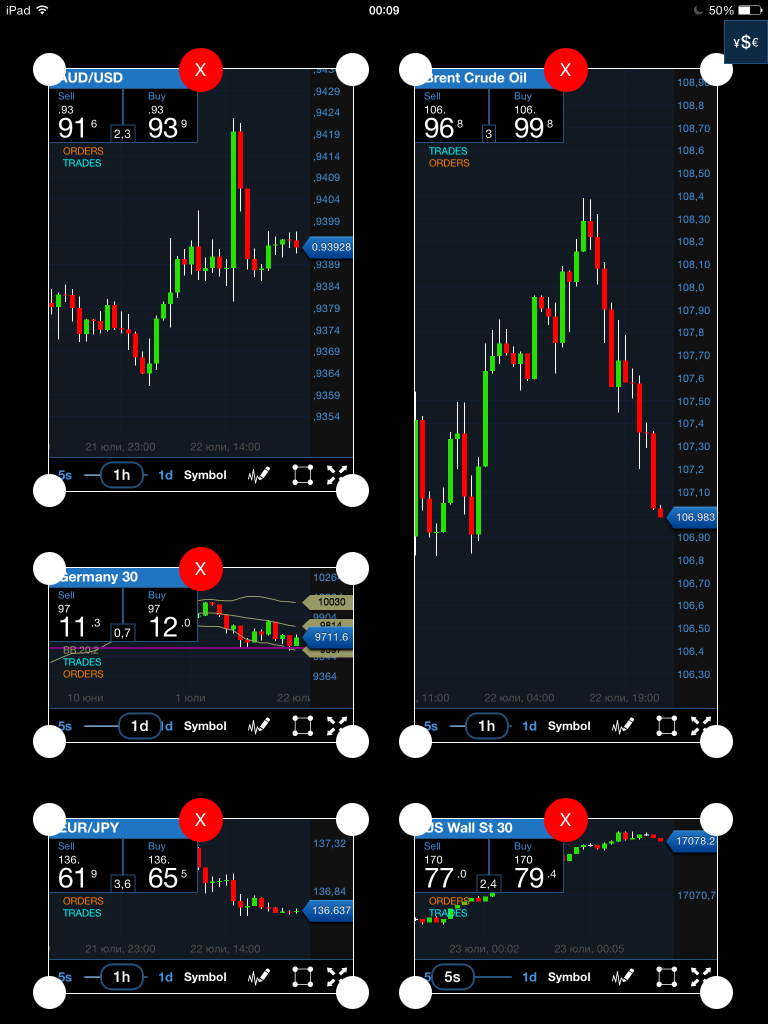 We asked Mr. Piryatinski about the functionality of one of the most important features for traders – alerts. He explained that they function across devices and are server-based, so even if an app runs out of memory and is shut down in the background, an alert push notification will be sent out to the device. 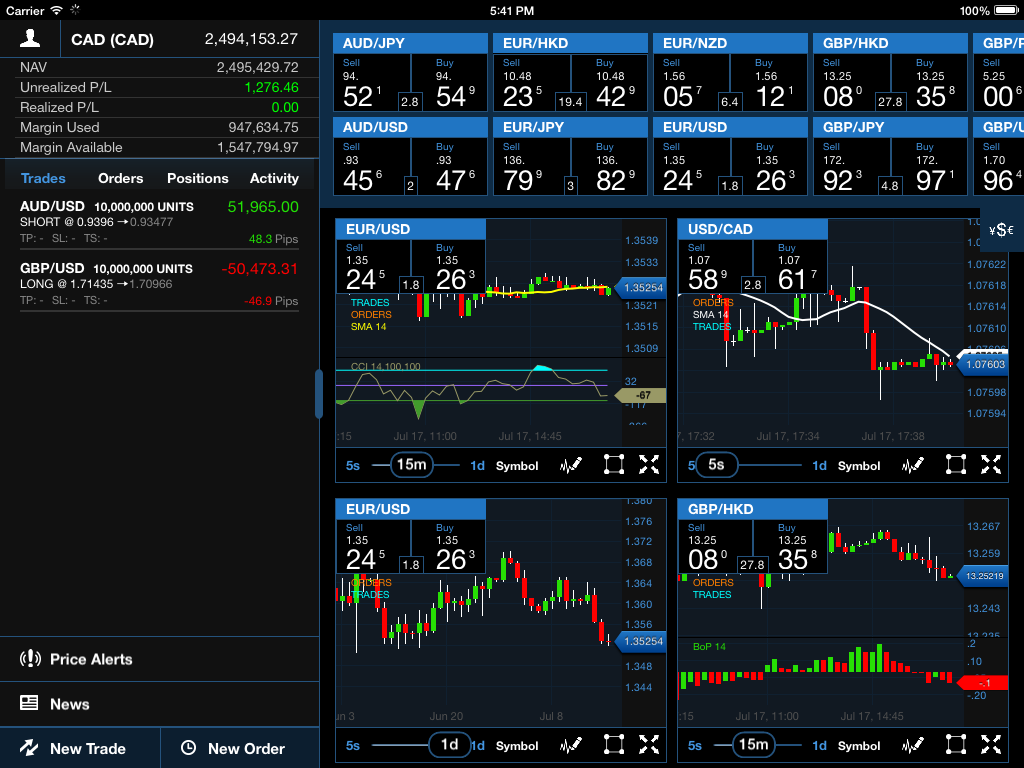 News from Thomson Reuters, Dow Jones and others have been available in previous versions of the app and continue to be present with the added option of reading the wire in full screen mode, taking advantage of the fact that a very big part of tablet users buy these types of devices to read on them.

According to data provided by Mr. Piryatinsky, 35% of the iOS logins at OANDA occur through Apple’s iPad. He shared saying, “The company is moving away from the “one-size-fits-all” approach and will focus on customization for users, allowing them to set-up their screen to best suit their trading style and strategies.” The next update is around the corner and will bring some additional features in the fall, while updates to both the iPhone and Android apps will be rolled out in the near future.

While stress testing with more than 15 charts scrolling down on the display space, we did run into some updating speed issues. No such problems have been observed under real-life situations when using about 5 to 6 charts. After all, looking at 10 instances simultaneously is mostly done by traders who use at least two desktop monitors for their operations, so it is hard to justify the necessity of displaying more than 8 charts simultaneously on an iPad sized screen.

While the product has truly made a big leap ahead of its predecessor, it is not flawless. Switching between fullscreen and multiple chart windows display did make the charts in the background “idle” and it takes some time for those to refresh and get updated quotes. This can be time sensitive for a trader, considering the various situations in which he/she is willing to switch between display modes quickly. The chart time frame has been limited to daily information, and many traders would be keen to see this functionality expanded in future releases. The maximum alert term has also been limited (in this case to one month), which sometimes, especially in periods of low volatility such as the one we are going through, can be insufficient. 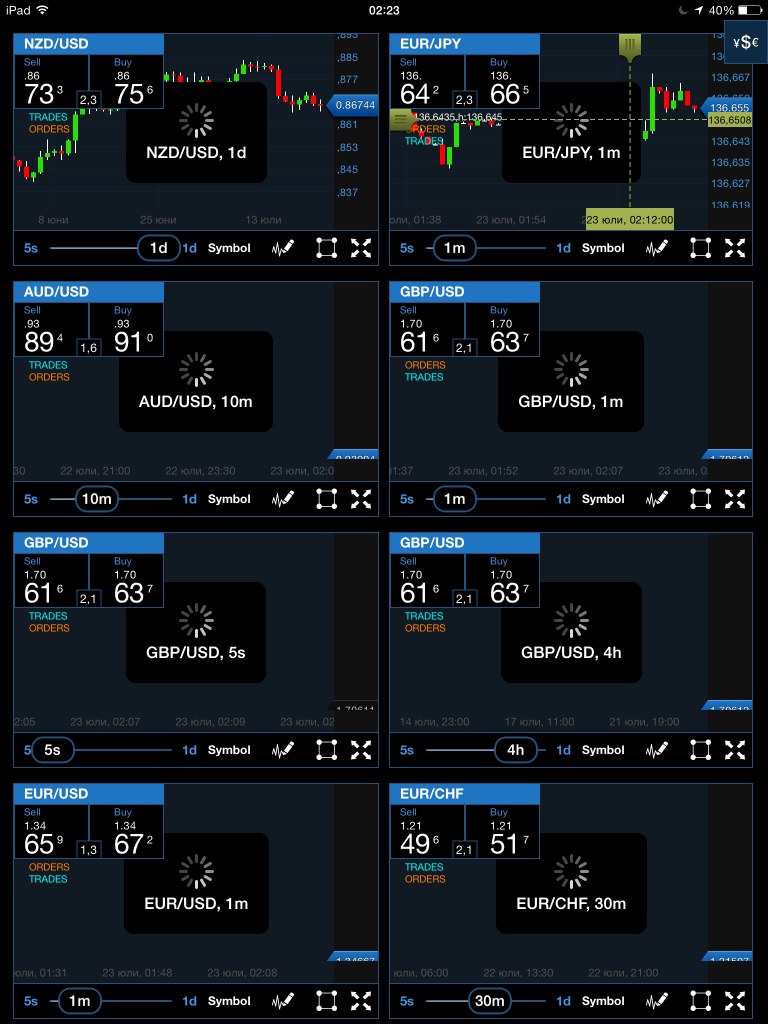 A notable option missing from the offering to provide a fully customisable experience, has been the lack of the ability to rearrange the quotes panel. Items are fixed in alphabetical order, which can be uncomfortable for some traders who are used to seeing their quotes in a certain way. We will be looking at future updates to have this option added to the list of rearrangeable sections.

According to a company announcement, its mobile development team will continue to work on releasing more customisable features for the platform in the months ahead. New elements in fxTrade Mobile will add to its already existing charting functionality featuring 9 chart types, 15 overlays, 16 indicators and drawing tools.

The company’s Vice President of Product Management, Trevor Young, stated in the company’s announcement,“OANDA was the first broker to release a tablet trading app and much has changed in four years. At the time, our goal was to match the desktop feature set but we’ve already eclipsed that and have more rich features available for mobile.”