Oanda has broken the ice by bringing forex trading to the iPad. By, being the first in the forex market to bring such a new innovation; Oanda can expect a new wave of customers. The iPad is has been selling faster then the iPhone when it launched. We know many forex traders have been advocating for a “forex on the go” trading technology … Well folks, you have it now with Oanda. Android royalists you won’t have to worry about being left out, because there will be an Android version also available for you to download.

Oanda innovation didn’t start out of blue; they are one of the top Forex brokers in the market and have an existing award winning trading platform. This news will certainly shake and push the forex brokers to come out with such leading-edge technology. Not only do the forex brokers have to play catch-up but they must follow the trend that Oanda has created.

When it comes to Oanda’s iPad app display, it has high-resolution and it is very detailed. You will not have to worry about making an error or pushing multiple buttons. Scrolling through the app should be more interactive then your desktop computer, laptop, or iPhone. There were many complaints about the iPhone forex trading apps due to the size of the screen, flexibility, and freezing; now you will have much more screen space with the iPad, it’s processor is much faster, and the ability to stroke your finger through out the screen should be a piece of cake. Some of the features that will be present with iPad version; you will able to set your profit, stop loss, and add trailing stops. The iPad app will provide you with immediate execution on all major currencies and four metal pairs. The Android version will provide you with the same awesome features as the iPad app. 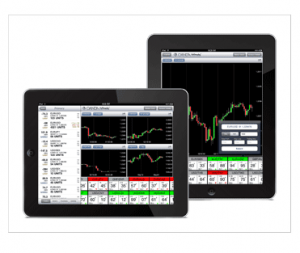 It’s a no brainer that if you are a forex trader and have purchased an iPad or an Android phone recently would be asking yourself this question, “How long before you sign up with Oanda?” How much did that iPad or Android phone cost you again? It is the best of both worlds, not only will you be able to trade Forex but you will also be able to multitask. Now, with all the great features that the apps present, expect some glitches and errors to occur due to the apps just recently released.

Oanda has once again proved that it will revolutionize the forex market. The combination of having their Forex app available for both the iPad and Android should tell you something. Both apps have a one-tap execution screen, multiple time-frames, 24/7 live support, and the ability to execute trades anywhere is marvelous. This is the total package; it is hard to deny that Oanda is one step ahead of their competitors. Did I mention that both apps were free?