Interactive Brokers, LLC , a global electronic multi-asset broker and market-maker listed on the Nasdaq under ticker IBKR, has reported its volumes for the month ending July 2016, which showed mixed results across a number of notable metrics, according to an Interactive Brokers statement.

Despite the decline in DARTs over a monthly and yearly interval, the equity balance in customers’ accounts during July 2016 totaled $76.5 billion, representing an increase of 4.0 percent MoM from $73.7 billion in June 2016. In addition, Interactive Brokers bested its 2015 equivalent, having notched a gain of 16.0 percent YoY from just $65.8 billion in July 2015. 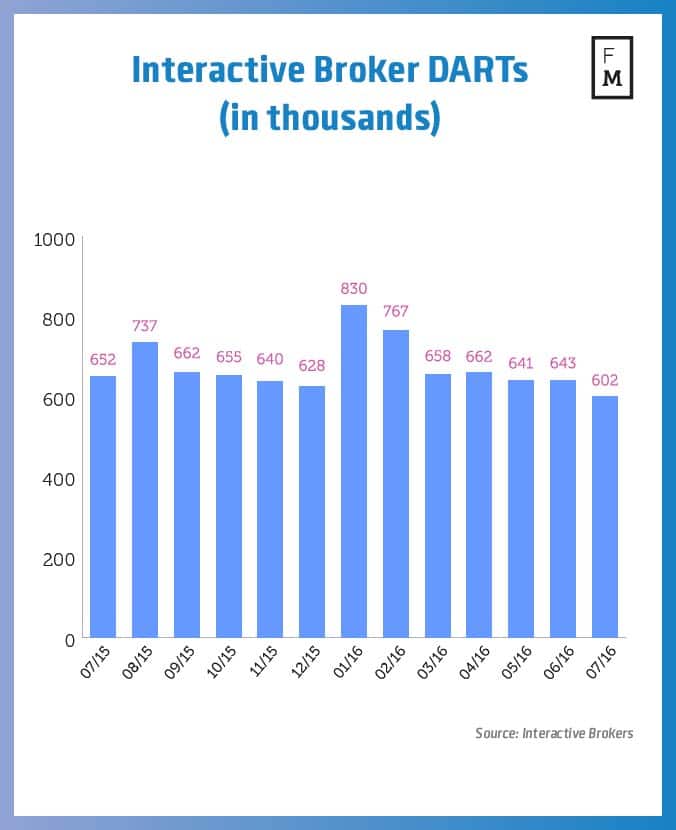 On average, Interactive Brokers charged clients in July 2016 commission fees of $4.03 per order, including exchange, clearing and regulatory fees, with the key products metrics coming out at $2.25 for stocks, $6.05 for equity options and $6.64 for futures orders.

Last month, Interactive Brokers also released its Q2 2016 earnings report, which showed lower net revenues by 4.6 per cent, coming in at $369 million. In addition, the company’s income before income tax was reported at $213 million, which is lower by 11 per cent when compared to a year ago. The making segment of Interactive Brokers posted an 83 percent decrease of the income before taxes.