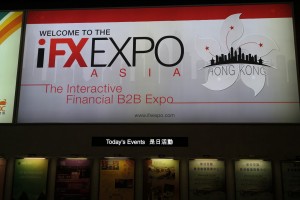 iFX EXPO Asia 2015, the industry’s biggest event taking place in Hong Kong, has drawn to a close after two days chock-full of panels, exhibitions and unique business opportunities. The Black Thursday CHF event, whose domino effect is still deeply felt in the forex trading industry, took central stage both in and out of the panel hall.

Overall, it seems that Asian attendees managed to dodge the Swiss fireball, with only a limited number of visitors having had direct exposure to Swiss crosses. On the upside, the recent uptake in volatility has put a much needed smile on the faces of some, as they embrace investor activity with expected growth in volumes. Their Western counterparts, however, experienced unprecedented losses.

In the first panel, CEOs and senior executives shared their views, feelings and insights on the matter. Panelists from all around the globe shared a feeling of frustration towards the SNB’s move and the way it was conducted.

Denis Sukhotin, chairman of FxPro, theorized that the ceiling drop could have been done on the weekend or at Friday close, thus giving the trading community some time to think about the event and draw stable conclusions on what happened and how best to deal with it.

However, these points were questioned by fellow panellists who argued that, although the immediate impact would have been minimal on a no-trading day, there potentially could have been more damage to the market come Monday morning.

Panellists were representing every major global financial centre with representatives from the UK, Cyprus, Singapore, Hong Kong, UAE and Australia.

Panellists also highlighted the actual damage or effects of the debacle. GAIN Capital Asia-Pacific Managing Director Shane Braunstein shared that only a few hundred clients were affected, reiterating the listed broker’s view that it managed to whether the storm.

A similar view was acknowledged by ADS Securities’ Matteo Legler and TradeNext’s Mohsin Jameel, who both experienced minimal impact. Mr. Sukhotin, however, informed the audience that his firm did lose a reasonable amount, somewhere in the million-plus range.

Other panellists did not share the FxPro founder’s view. Saxo Bank’s Adam Reynolds reinforced his firm’s view that clients that hold negative balances should pay back the money, similar to any product whether it’s a credit card or a new car; If you owe money, you are obliged to pay it back.

There was one matter that all participants did see eye-to-eye on: their ideas about the future of the industry and on regulation, leverage and capital, all primary components of margin trading. The speakers agreed that the Black Swan of mid-January reinforces the importance of having financial instruments that can easily be managed and governed by regulators.

Among the interesting questions posed by the packed audience, one (regarding the old debate between OTC and exchange-traded instruments) garnered an equally interesting reply; Mr. Braunstein stated that both instruments have their pros and cons and suit different traders.

Technology Differs across the Continent

The second day of the exhibition commenced at 10am with attendees following up on yesterday’s discussions and meetings. Although the overall number of visitors was lower than day one, some new faces were lingering around the main hall.

The role of technology was the topic of debate at the next panel in the afternoon session. Experts from across the spectrum were outlining their differing views on the technology present in different parts of Asia. When looking at Asia, Itay Damti of Leverate explained that MT4 has become popular in China due to the nature of its architecture. Maor Lahav of Panda TS added that in China there are several copycat versions of MT4 that are openly available to users.

The panellists continued to look at the wider trends in the market and addressed how initiatives such as social trading have found solace in the Asian market, as it coincides with the general culture of following your friend. Although, Currenex’s Hu Liang pointed out the challenges for social trading firms such as slippage, particularly when their LPs execute orders of size and quantity.

Olivia Chen of Linguavista concluded the speaking sessions with a keynote speech on how providers and brokers can take advantage of content with regard to Asia, looking at key markets and hubs that can provide wider access to the region.

A Show That Will be Remembered

The overall feedback from exhibitors and attendees was fantastic. Some firms were completely ecstatic with an abundance of leads and new business opportunities.

A firm pat on the back for the organisers of iFX Expo Asia, who continue to support the growth and development of Asia’s thriving margin trading environment.

Attendees will be winding down to drinks, canapés and the annual closing party surprise thanks to TradeNext who, like they do every year, draw the curtains down on a successful two-and-a-half days of networking and celebrating.

I ask you, what self-respecting businessman wears white socks with black shoes?

For those brokers that do not forgive negative balances: Do these negative balances constitute "profit" for these brokers? If that is the case surely this can be seen as a "negative" for our market? I presume the "reputational risk" means nothing to the likes of ADS, Saxo and all those brokers "persuing" this "debt"? With the amount of money they have made as Market Makers (profiting from clients losses) I presume they are happy to squeeze their clients for more?

The panel was one of the best, its great to hear the top executives actually say something new, hats off to the presenter who really challenged the speakers, very entertaining