While the year 2017 came to an end having been dominated by cryptocurrency news, retail FX trading still remains a driving force for the finance industry. Yet again, the Japanese market was significantly ahead of the rest of the world in terms of its FX market, and yet again GMO Click Securities was the biggest firm in Japan.

According to the latest data from Finance Magnates Intelligence, GMO was the undisputed leader throughout the whole of 2017, achieving average monthly volumes of $660.32 billion. Although this number is very impressive, it is significantly less than the high of $900 billion that was set in 2016. 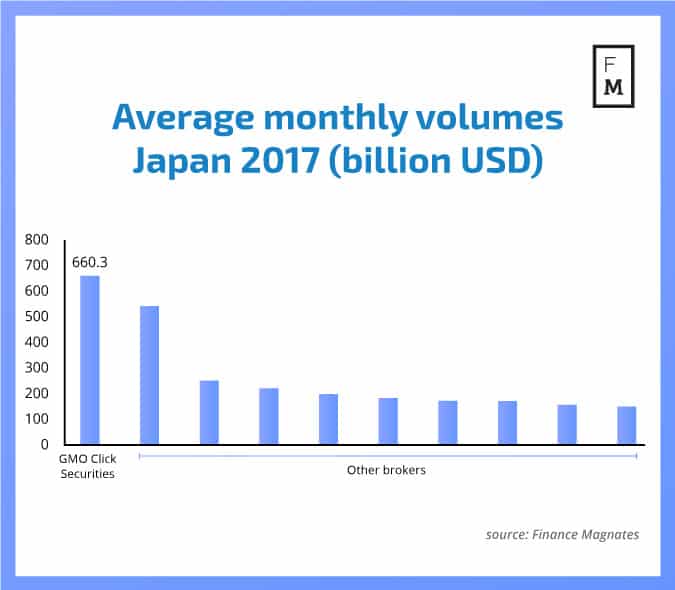 GMO Click has been the biggest forex broker in the world since 2012, but we recently reported on its poor December results which were its lowest since August 2014. Trading activity on its FXNeo platform tanked by more than 30 percent month-on-month and more than 50 percent year-on-year.

In September, GMO Click announced that it would be changing its name to GMO Financial Holdings. Its mother company GMO Internet has been active in the cryptocurrency realm, announcing in September a plan to open a Bitcoin mining business in Northern Europe, and in December a plan to begin paying employees part of their salaries in Bitcoin by March 2018.

The Japanese retail FX market remains very strong, although some signs of change could be observed as third position in the rankings was taken by Australian broker IC Markets. In 2016, the highest position of a non-Japanese broker was seventh. Whether this is a temporary change or the beginning of a longer trend shall be seen in 2018.