I just had a chance to review Forex Club’s new iPad application and I have to say the result is nothing short of stunning. If you’ve been following my blog in the last couple of years I’ve also been claiming that mobile trading is going to be the next thing in forex, but not on mobile phones themselves rather on tablets like iPad and Galaxy. I was claiming that based on a very simple perception – small screens aren’t fit for trading. Large screens are. You can argue whether tablets like iPad and Galaxy are truly mobile or not as they are not mobile phones but rather light laptops and not all users have data plan on them – some, like me, use them with home/work wi-fi only. But it is certainly a whole new concept of trading for mobile traders as the user experience of touch trading is something completely different, it actually makes trading more accessible and dare I say – fun? The only question is not whether this is going to be successful, as in my opinion it already is, but the broader one – will tablets become an integral part of our lives and replace old heavy laptops or will they remain a small niche? If the former than this certainly is going to revolutionize the way we trade.

Forex Club LLC (www.fxclub.com), an online off-exchange retail foreign exchange brokerage, has announced the release of iDealForex™ for iPad, a full trading application optimized for Apple’s popular iPad™. iDealForex™ is designed with a complete set of feature that allows traders using Forex Club’s ActTrader™ platform to log into their existing account and view dealing rates, place trades, manage their accounts, view reports and much more. Forex Club is proud to be the first NFA regulated broker to offer this application.

“Apple successfully brought one of the most elegant mobile solutions ever created to market with its iPad,” said ActForex COO Igor Litinsky, “and we followed suit by creating ActPad that has the ability to make trading in our mobile society, a much better experience. Because so many traders trade directly from charts, the iPad’s graphic resolution for the ActTrader platform alone makes ActPad an important consideration for any serious trader.”

Key features of iDealForex for iPad include: 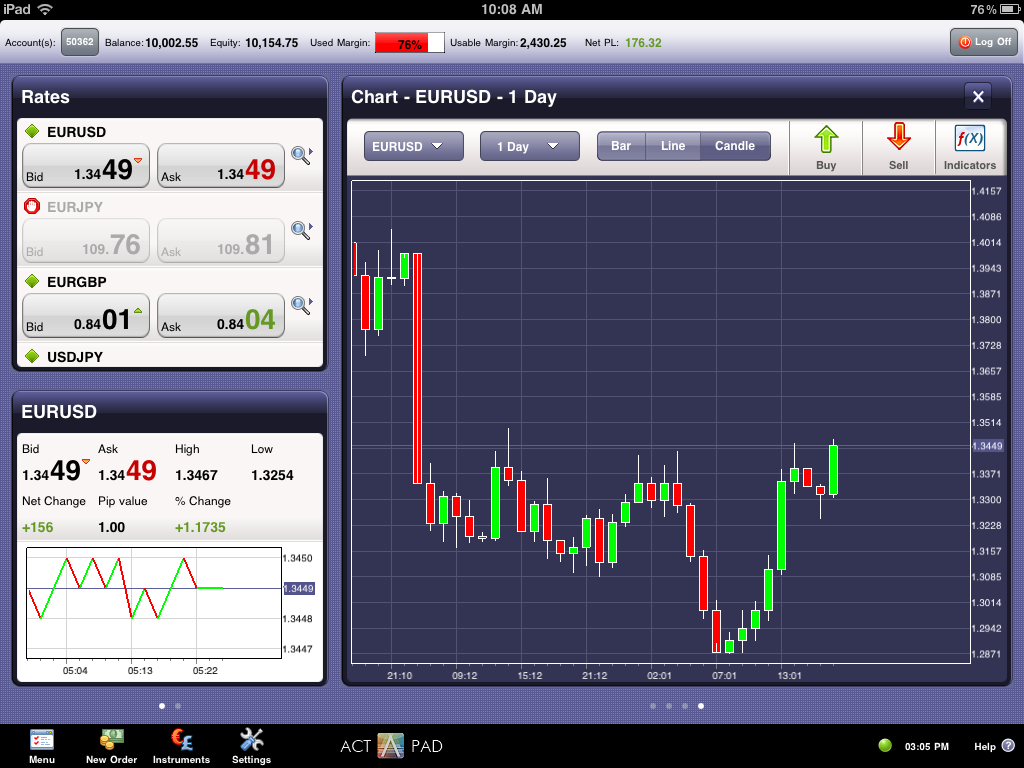 Forex Club’s ActTrader platform has gained recognition since its launch in mid-2010 for its low average spread costs (average of 0.8 pips on most major pairs), charting features, and automated trading solution. The iPad application will offer the same low spreads and instruments that are currently available on the desktop version, as well as impressive charting capabilities that surpass the capabilities of many of today’s mobile forex apps.

iDealForex’s iPad app is similar to the iPhone app of the same name, which was released by Forex Club back in September of 2010. iDealForex for iPhone offers impressive charting features that allowing traders to scroll through past timeframes, plot indicators, and trade from the charts. These features are even more advantageous on the iPad app, as the large display, crisp picture, and responsive touch-screen make it easier for traders to analyze charts.

I gave the app a go on Forex Club’s iPad and can say that ActForex (the company behind this technology) have done a great job in both design and functionality. The main screen of the application shows 3 different parts: Rates, small tick chart and large chart with dozen of indicators. This allows you to work on just one screen unlike many traders who work on several screens in parallel (often for different reasons). You can scroll through the various currency pair rates while looking at an indicator on another currency pair and viewing the EURUSD tick chart simultaneously. you can also scroll through various screen moving your finger across the screen (just like when viewing photos on the iPhone) between charts, open positions, closed positions, pending orders and more. I think ActForex still have some work to do to make the application work faster but other than that it is as smooth as it gets. 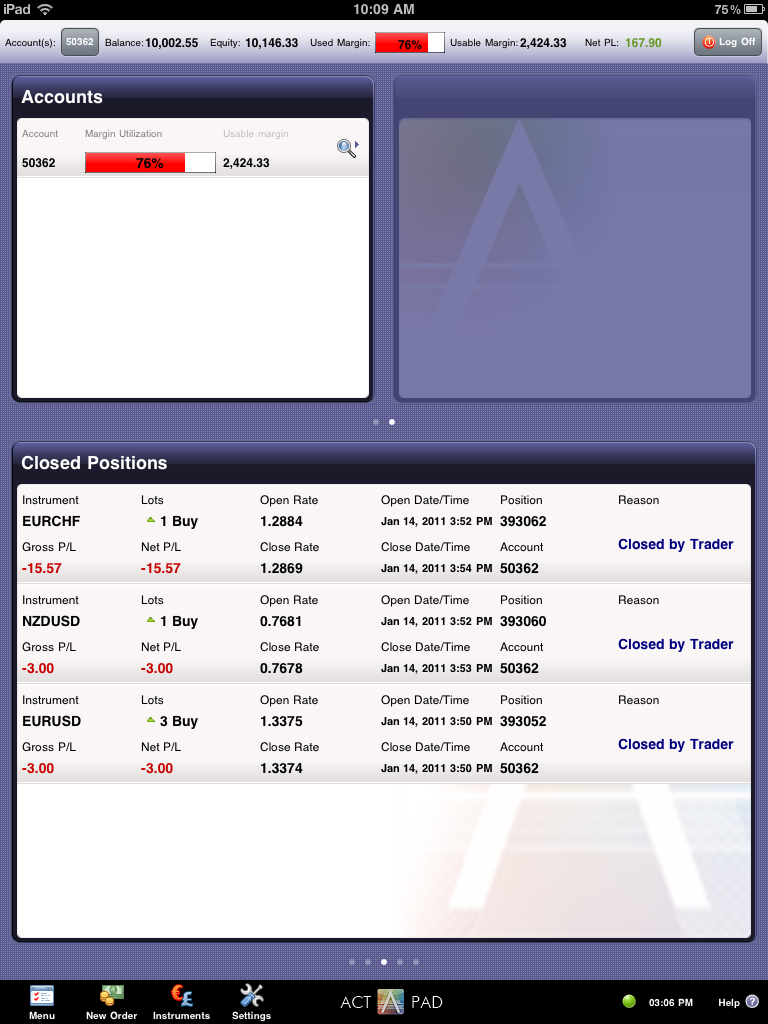 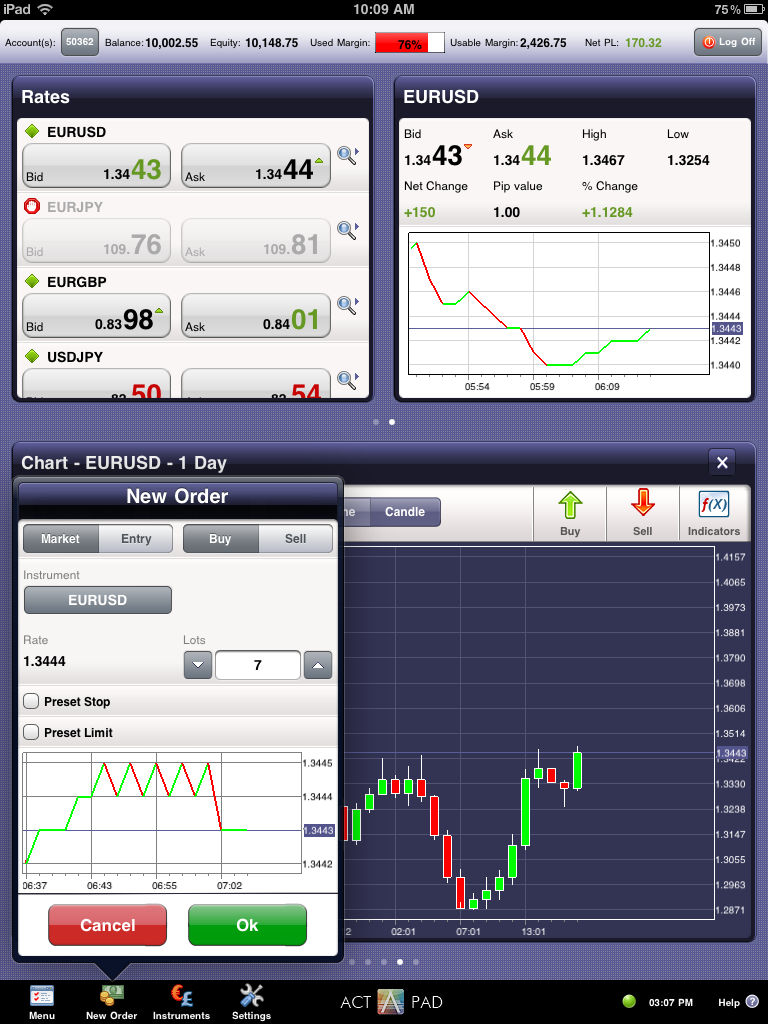 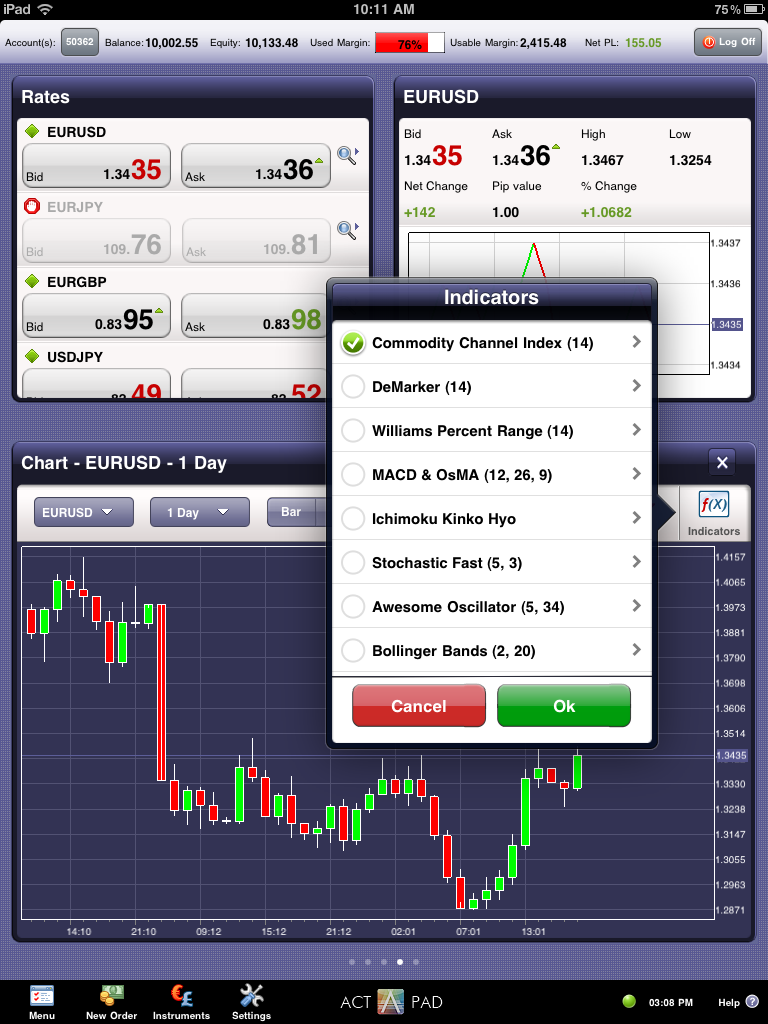