Shares of MF Global plunged to $1.07 on Wednesday when the company reported its largest quarterly loss ever on Tuesday, ($191.6 million loss). Close to 90% of the market cap has vanished since former New Jersey Governor took over as CEO for Brokerage giant MF Global. On Monday Moody’s downgraded MF Global debt to just above junk status. As of Wednesday, the company’s bonds were trading at an 18% yield underscoring a lack of investor confidence in Jon Corzine’s capacity to manage the company as CEO.

Just months ago, there were rumors that Jon Corzine would be taking over for Treasury Secretary Tim Geithner. In an August 9th regulatory filing related to a debt offering stated that the 6.25% bonds would pay an extra percentage point of interest if Corzine, who was governor of and U.S. Senator from New Jersey after he left Goldman Sachs, is named to a federal post and confirmed by the Senate before July 2013. With the recent downfall of his company’s stock this outcome is unlikely; however, the chances of Corzine being ousted from MF have vastly increased.

Jon Corzine had attempted to turn MF Global from a brokerage to a mid-tier investment bank. In doing so one of the cornerstones of his strategy was to take on more principal risk. According to an October 25th Press release on earnings, MF Global mentions “As of September 30, 2011, MF Global maintained a net long position of $6.3 billion in a short-duration European sovereign portfolio financed to maturity (repo-to-maturity), including Belgium, Italy, Spain, Portugal and Ireland.

On a conference call with analysts on Tuesday Jon Corzine stated, “The broker has “little principal risk” The short-term debt positions are “my personal responsibility and a prime focus of my attention,” said Corzine.

Some reports suggest that MF may be headed to a fire sale although MF itself just completed the acquisition of Strategy Runner ten days ago. 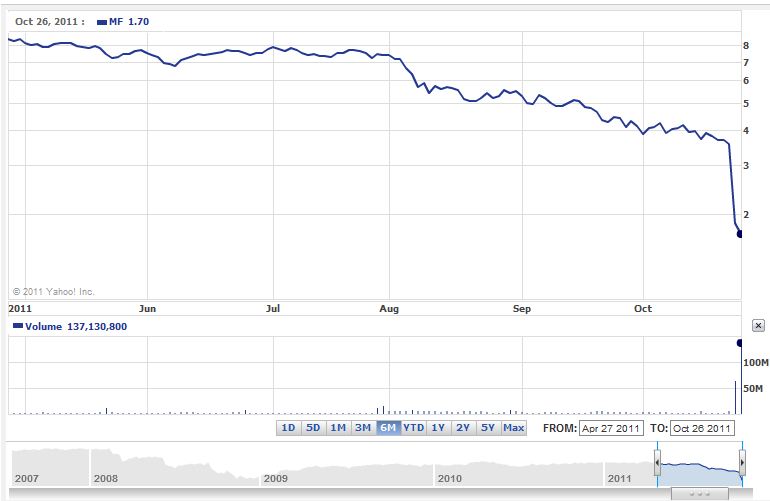 Forex Magnates is tracking all retail forex brokers’ volumes including MF Global in its quarterly reports.

Again? They were in the news in 2008 with some dodgy wheat-trades too..

I could see some clients panicking – if i were a client, i would probably run for the hills too. Even tho it looks like there is no immediate collapse.

Again? They were in the news in 2008 with some dodgy wheat-trades too..

I could see some clients panicking – if i were a client, i would probably run for the hills too. Even tho it looks like there is no immediate collapse.