OANDA is going to increase margin requirements on all pairs that include the British pound (GBP) and the euro (EUR) starting from the 17th of June 2016. The company is one of the established major brokers to update its trading conditions to reflect the possibility of substantial market turmoil running into the Brexit referendum.

The margin requirements are going to be increased to 5 per cent on the GBP pairs (1:20) and to 2 per cent on the EUR pairs (1:50). The company is responding to the increasing probability that we could see some major moves on the currency markets in the run up to the referendum.

For its U.S. clients, the company will only increase the margin requirements on GBP pairs to 1:20, as its clients are already limited to 1:50 across the majority of currency pairs, including the EUR/USD.

Back in 2014 a number of firms increased margin requirements on several FX pairs including the CHF, however for many of these this was not enough to prevent them from suffering losses in the aftermath of the Swiss National Bank’s decision to scrap the 1.2000 exchange rate floor from under the EUR/CHF.

Another step that could be close is for brokers to look at their trading conditions for major indices. For now none of the firms has addressed the prospective volatility on equities markets. OANDA has advised its clients to make sure that they have enough collateral on their accounts to meet the new trading conditions that will last for about a week.

With the financial markets typically being a relatively reliable discounting mechanism we could yet see another round of announcements by major and minor brokers alike. 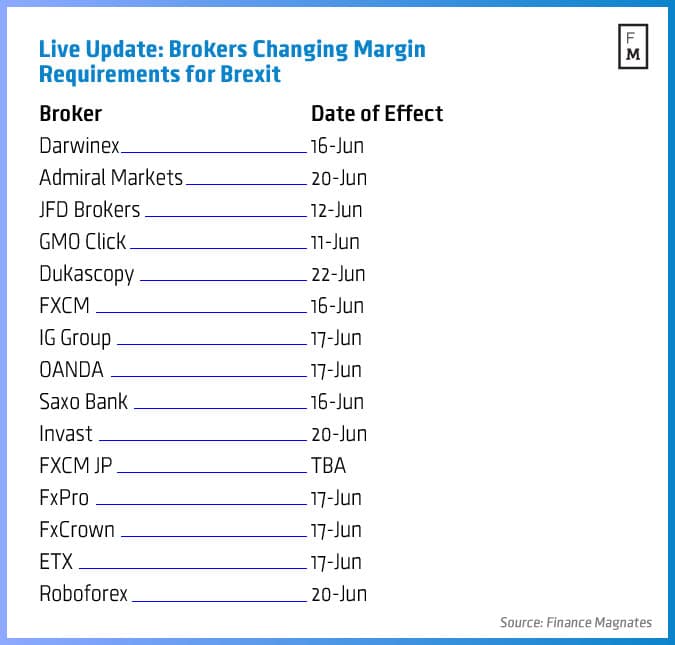