The famous international online broker Alpari Limited today opened a new international headquarters the Republic of Mauritius to target the growing opportunities in the region, particularly in the African and Indian markets. Alpari opened in the Maeva Tower, one of the Ebene city’s largest business centres.

The launch follows a meeting held earlier this morning between the firm’s senior management with the country’s representatives, notably the Attorney General and the Senior Advisor to the Prime Minister, to discuss priority areas of cooperation.

Following the meeting, the Mauritian Government offered Alpari several options for support in the creation of a multi-functional market structure which will offer clients the opportunity of a wide range of financial operations.

Alpari believes having a Mauritius base will offer significant opportunities to target investors in the macro-region which encompasses the countries of southern Africa and the Indian Ocean basin, one of the fastest growing and most vibrant in the world. In addition, the company finds several motivations to operate in the Mauritius which include “the favourable business climate and the progressive nature of the country’s legal system in regards to large international financial companies.”

Ongoing expansion in the country

In 2014 Alpari established a regulated entity in Mauritius under the name Alpari International Limited, in order to provide its clients with the option of trading with a firm regulated by the Financial Services Commission (FSC) of Mauritius.

Mauritius was for a long time a preferred destination for those interested in operating an offshore forex broker due to the softer financial requirements, which make it a better option than many European jurisdictions.‎ 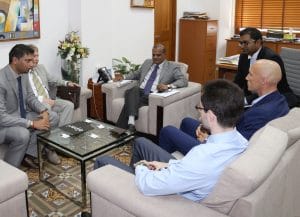 ‎The benefits list includes limited set up costs, low capital requirements of about €17,000, and ‎a favorable tax regime. But recently it has become increasingly difficult to apply and obtain a forex licence in Mauritius to the point that most providers have changed their destination to Belize, despite the higher capital requirements and the more expensive fees structure.‎

Mr. Andrey Dashin, the owner of the Alpari brand, commented: “The opening of these headquarters is a significant event in the history of our company, thereby confirming the high level of professional achievements made by Alpari. The Republic of Mauritius has kindly welcomed and opened up new horizons for the development of our international brand in the market of financial services due to its progressive legal system and long-standing market traditions.”

Share this article
Tags: Alpari / Mauritius
Got a news tip? Let Us Know

…curious.
I presume the Mauritius Body, based on quick research, is only really an option for starter brokers, of brokers looking to bypass stricter rules imposed on them by the more heavyweight regulators.
Also, hasn’t FXTM also just expanded into South Africa, another company that Mr Dashin owns, surely there is a conflict of interest to be running two competing companies, unless you simply move clients from one to the other when needed, based upon restrictions imposed.

Whats your view on this….

…Bizarre.
Initially i would be concerned as to why any broker would seek regulation from a more lax authority, when this doesn’t really serve any purpose other than to allow them to bypass the stricter regulations that more heavyweight regulators impose.
Secondly, is it not curious that the owner of Alpari and FXTM is expanding in to the same regions almost simultaneously, is there no conflict of interest here, or are clients simply pushed between brokers depending on where they can be regulated and housed.
I would be interested to know more about how owners of multiple brokerages remain impartial in such situations.