In the second time in less than a year, the European Union (EU) is at odds over one of its members, this time with key players alleging that British participation brings too much bureaucracy for business. Given the complex structure of the EU, massive regulations have been demanded on goods and services in an attempt to create a single well working market in Europe, with varying levels of success.

Skeptics are disappointed in the decision of the UK to assert its right to set its own agenda across specific realms. This has come to the forefront in the form of immigration – their stance is an exit from the EU over immigration, given that the country sees this as the only way to reduce the flow of migrants into its borders.

However, a closer analysis suggests that the most valuable source of foreign direct investments (FDI) in the UK is in fact EU itself. Results from UK government research show that in 2014 other EU countries invested approximately £496 billion ($708 billion), which constitutes roughly half of all outside investments. Moreover, the British economy greatly relies on trade with EU – 45% of exports with a value of £230 billion ($329 billion) finish up in other EU member states.

Finally, nearly 53% of Great Britain’s imported goods and services, worth £289 billion ($413 billion), are made up by EU bloc countries, highlighting the symbiotic role the two regions play for each other. This also does not quantify or take into account the large number of jobs that are reliant on trade, which stands to decline in the UK if a split is ultimately made.

According to data by the European Institute, nearly 3.4 million British jobs are estimated to be linked to exports to EU, which runs antithetical to its cause of preserving jobs, while stymieing the flow of immigrants.

Of all matters currently facing the UK, migration seems to be the most arguable matter in the debate. EU membership is a commitment that grants migrants uncontrolled access to the jobs in UK – this is reflected by roughly 2 million EU citizens living and work in the UK. 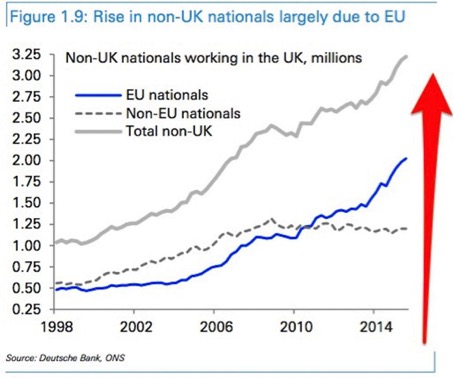 This number correlates with about 1.3 million U.K nationals that live in other EU states, the UN estimates. Brexit supporters also assert that the EU’s regulations are creating difficulties for businesses – the cost of these regulations is £33.3 billion ($47 billion) annually according to the 2015 study published by the Open Europe think tank.

However, to cut this bill, a Brexit may not be a tangible option because, in order to maintain unrestricted trade with the EU, the UK would still have to comply with these regulations. The UK is an exclusive contributor to the common budget of EU, last year the difference between received and contributed resources was -£8.5 billion ($12 billion). Brexit supporters overlook the insignificant value of the budget (about 1% of the union’s GDP) and remain concerned about the fact that UK is a net contributor. 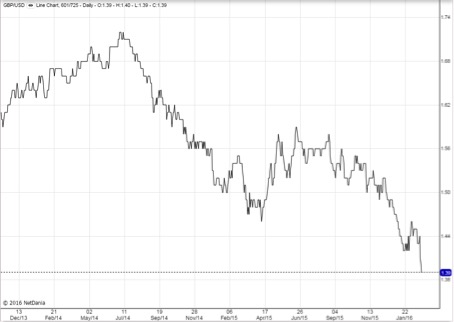 The pound sterling also experienced a downward tendency due to the growing Brexit risk. Indeed, the pound has not incurred such a staunch decline since the appointment of David Cameron – the other notable fall was recorded back in May 6, 2010, the day of the UK’s general election, which tumbled -1.72% to $1.4156. Since March 2009, the GBP has also undergone the largest decline against USD over this period, relative to all other major currencies.

Unfortunately for proponents of EU unity, a Brexit became a much more plausible reality after London’s mayoral decision to back the UK’s departure from the bloc. Moreover, Moody’s comment also boosted concerns about the predicted shift in the country’s credit rating. Warnings about negative effects on the UK’s credit ratings also came to the forefront today, with concerns for a Brexit reinforcing this trend, which could lead to a ‘long stage of uncertain state’, according to Moody’s. Moody’s has also given out a warning that a Brexit on June 23 could push down the current Aa1 rating. Investors are also showing signs of fear over Prime Minister’s renewed negotiations with Brussels as well as for Boris Johnson’s decision to support Britain’s leaving.