After reaching its highest level since November 4 the previous day, July crude oil futures ended the week with a sharp sell-off, nearly forming a potentially bearish closing price reversal top in the process. The selling pressure was strong enough on Friday to confirm the closing price reversal on the daily chart.

U.S. oil prices dropped about 3 percent on Friday after a report from oilfield services firm Baker Hughes showed the U.S. rig count rose for the second straight week and as a strong dollar again weighed on demand for crude futures.

The report showed the number of rigs operating in U.S. fields rose by 3 to 328 in the previous week. At this time last year, drillers had 635 rigs online. This report indicates that some U.S. producers are starting to believe that oil prices have turned the corner and are likely to stay above the $40. 00 benchmark. This is believed to be the price that makes U.S. producers profitable.

The longer the market remains above $40, the more likely additional rigs will come back online. Prices will continue to weaken if the rig count increase leads to a U.S. production increase. Last week, the Energy Information Administration reported that weekly U.S. crude oil production rose slightly by 10,000 barrels per day to 8.8 MMbpd for the week-ending June 3, 2016 –compared to the previous week.

Bullish traders are going to have to start watching the rig count and U.S. production very closely because long investor are looking for any excuse to book profits in a market that has largely been support recently by sabotage of Nigeria’s oil industry by rebels.

Technically, the main trend is up according to the weekly chart. The strong sell-off last week suggests that momentum may be shifting to the downside. 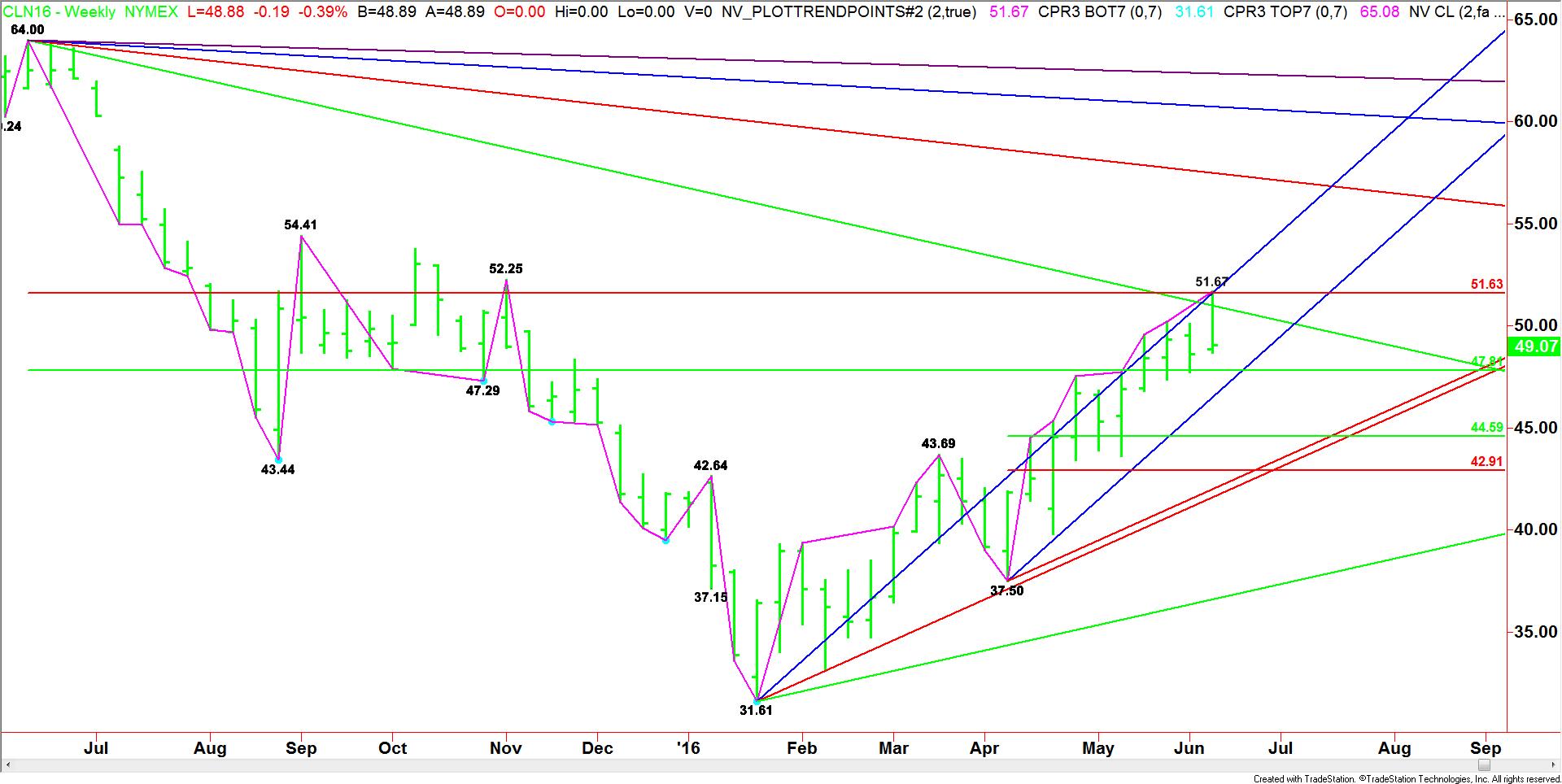 The main range is $64.00 to $31.61. Its retracement zone is $47.81 to $51.63. The market has been trading inside this zone for a month, having successfully tested both the support and the resistance. This zone is a natural selling area for profit-takers and fresh shorts, so if crude oil is going to start selling off, it is likely to occur inside this zone.

Besides the $51.63 Fibonacci level, resistance comes in this week at $50.75 and $52.61. Overtaking the Fib level at $51.53 will be the first sign the buying is getting stronger. Crossing to the strong side of the angle at $52.61 will put the market in an extremely bullish position.

A sustained move under $50.75 this week will indicate the presence of sellers. This could lead to a fast break into the major 50% level at $47.81. Crossing to the weak side of this level will mean the selling is getting stronger. This could lead to a test of the steep uptrending angle at $47.50.

The angle at $47.50 is the trigger point for an acceleration to the downside with the next target coming in at $44.59.

Watch the price action and read the order flow on Wednesday. If the EIA reports that US production is rising then look for selling pressure to begin. It will get stronger on Friday if the rig count rises again.

US Rig Count Rise, Production Increase Could Mean Crude Oil Has Topped
James A. Hyerczyk is a financial analyst for FX Empire, a leading financial portal. James has worked as a fundamental and technical financial market analyst since 1982. His technical work features the pattern, price and time analysis techniques of W.D. Gann.
wpDiscuz