U.S. stocks ended Monday’s session sharply higher, after Fed Governor Lael Brainard said it would be wise for the central bank to keep monetary policy loose. This surprised traders because many thought she would offer hawkish commentary. As a result of her comments, all three major indices rallied late to close higher for the day.

To some, Brainard’s comments may have taken a September interest rate hike off the table, but the price action in the major indices still suggests that investors are not going to give in that easily. Last Friday, the Dow, for example, lost nearly 400 points on hawkish comments from Boston Fed Governor Eric Rosengren. Yesterday, after Brainard’s speech, the Dow gained back about 200 points. 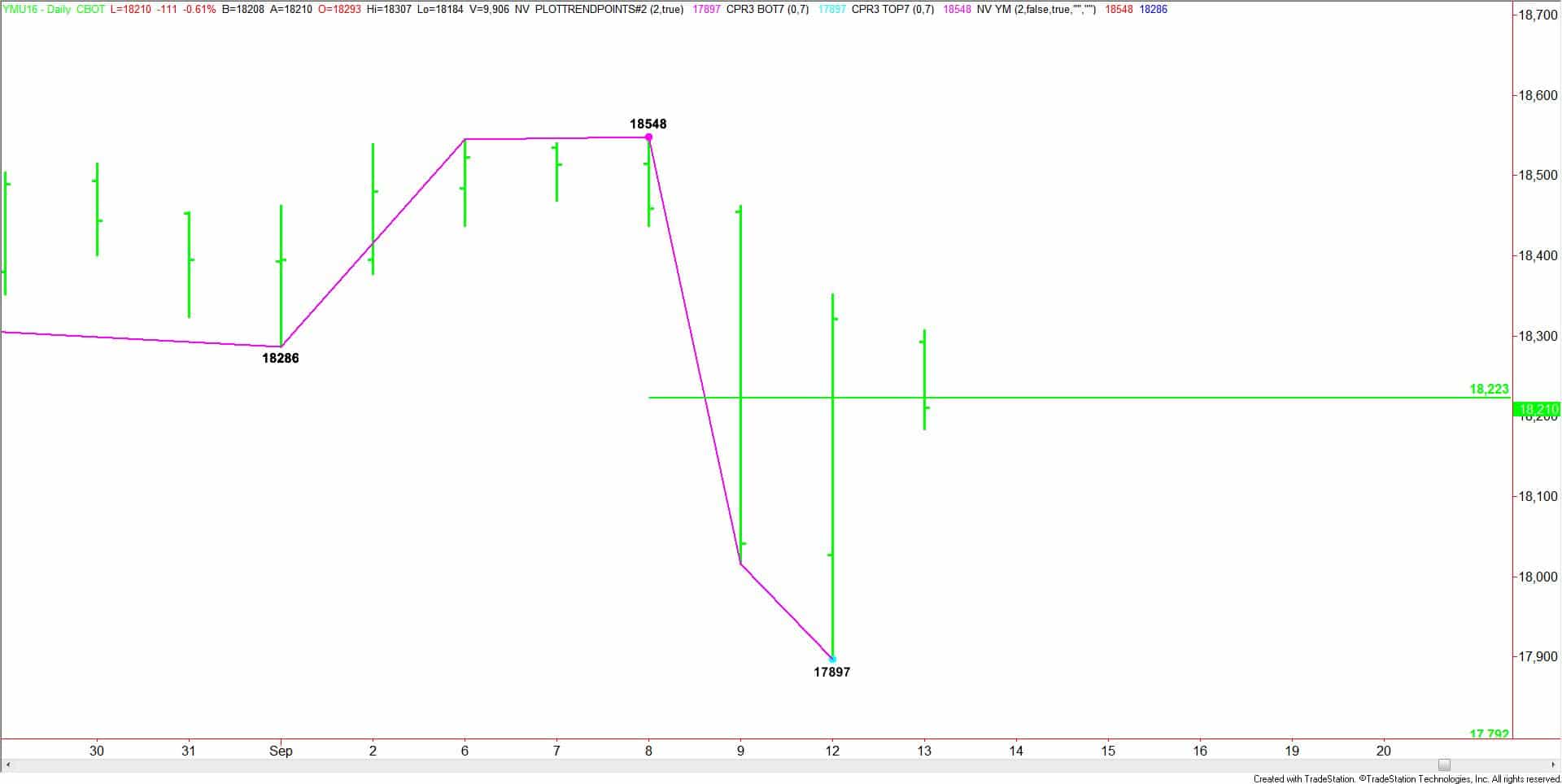 This suggests that investors are going to go into the September 20-21 Fed meeting with an open mind since anything can happen. Even after Brainard’s speech, Atlanta Fed President, Dennis Lockhart, once again sounded the hawkish alarm when he said a “serious discussion” on raising rates was warranted at the central bank’s next meeting.

After Rosengren’s hawkish comments on Friday and Brainard’s dovish comments on Monday, the ‘information’ and ‘misinformation’ as some traders are calling it, have pushed investors into wait-and-see mode. Additionally, on Friday, Fed Funds traders thought the chance of a September rate hike was 30%. Before Brainard’s speech on Monday, the number had dropped to 24%. After the speech, they were down to 20%. 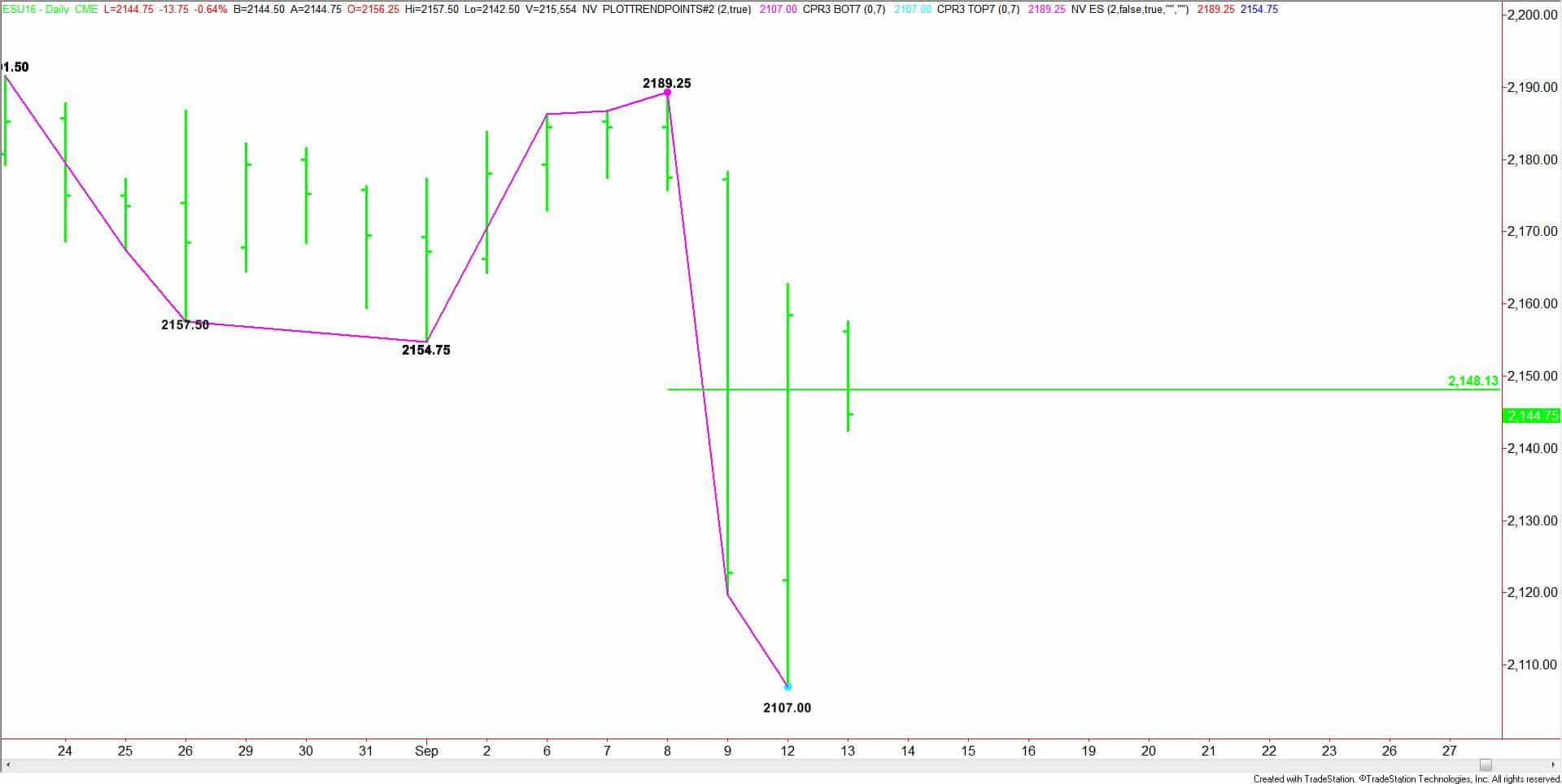 Looking at the September E-mini S&P 500 index chart in conjunction with the other data, we see a market straddling a key retracement zone. In other words, Rosengren’s comments were not hawkish enough to sustain the sell-off and Brainard’s dovish comments were not strong enough to start a new rally. Trading at or near the short-term 50% level at 2148.25 is proof of this.

This chart pattern could also be an indication that investors are compromising and saying that rates won’t rise in September, but they are likely to do so in December.

Until September 21, it is suggested that you remain flexible and not ask for too much from the market. I don’t expect a breakout move in either direction so it would benefit you to trade both of the 50% levels, playing for short-term moves. Try to avoid buying strength and selling weakness because the volume won’t be there to sustain the moves.

Consumer disbursal and private financial gain figures due for unharness at 8:30am in Washington, DC, might facilitate give additional direction for the market. each figures area unit forecast to possess climbed by zero.3 per cent in June from the month previous. Consumption has been a significant boon to the USA economy, and was notably necessary within the second quarter as investment lagged behind, which means the info may wrestle else significance. The release additionally includes the alleged personal consumption expenditures index, that is that the Federal Reserve’s most popular inflation gauge. it’s expected to possess up at associate annual pace… Read more »

US Stock Indices Poised to Fall Further if Fed’s Brainard Turns Hawkish
James A. Hyerczyk is a financial analyst for FX Empire, a leading financial portal. James has worked as a fundamental and technical financial market analyst since 1982. His technical work features the pattern, price and time analysis techniques of W.D. Gann.
wpDiscuz