This article was written by James Hyerczyk, financial analyst at FX Empire.

July crude oil futures reached the ‘magical’ $50.00 last week, touching $50.21 before selling off and producing a potentially bearish closing price reversal top on the daily chart. This is a sign that the selling is greater than the buying at current price levels. The chart pattern on the daily chart suggests the market may be poised for a near-term correction.

Typically, a daily closing price reversal top leads to a 2 to 3 day correction. In this case, however, we suspect the market is likely to drift lower into the OPEC meeting on June 2 as investors lighten up on the long side.

Many fundamental analysts are confused about the near-term direction of the market because some are watching the long-term supply/demand data and others are watching the short-term news events. Last week, one headline read “Crude Oil Tops $50 as Supply Worries Subside”. Later in the day after prices weakened, the headline read, “US Oil Settles Under $50 as Supply Worries Resurface”. So I have to conclude that $50 is the magic number that separates the bulls from the bears.

Longer-term traders cite the global supply glut as one reason why prices are unsustainable over $50. ”At 537.1 million barrels, U.S. crude oil inventories are at historically high levels for this time of year,” the Energy Information Administration (EIA) said in its weekly status report.

Fifty dollars a barrel has long been thought of as the price that would entice producers to restart closed rigs. This shifts the emphasis to the Baker Hughes weekly rig count.

On May 20, Baker Hughes released its weekly U.S. crude oil rig count. It was unchanged at 318 rigs for the week ended May 20. This is the lowest level since the 1940s. Last year at this time it was at 659 rigs. However, on May 27, the company announced that the rig count resumed its decline last week, falling 2 to 316.

The rig count could be the swing number in the crude oil market and it should be watched carefully. If it starts to trend higher then I expect prices to decline into a trading range. I also expect to see increased volatility because this indicator will raise uncertainty and bullish traders don’t like uncertainty.

I didn’t touch on renewed production in Canada after the wildfires and the unrest in Nigeria and Libya because I think these are short-term events and not that relevant to the long-term picture. I also believe that speculative money is being drawn into the long side of market because of these events. They may be supportive over the short-run, but the stories will go away eventually. 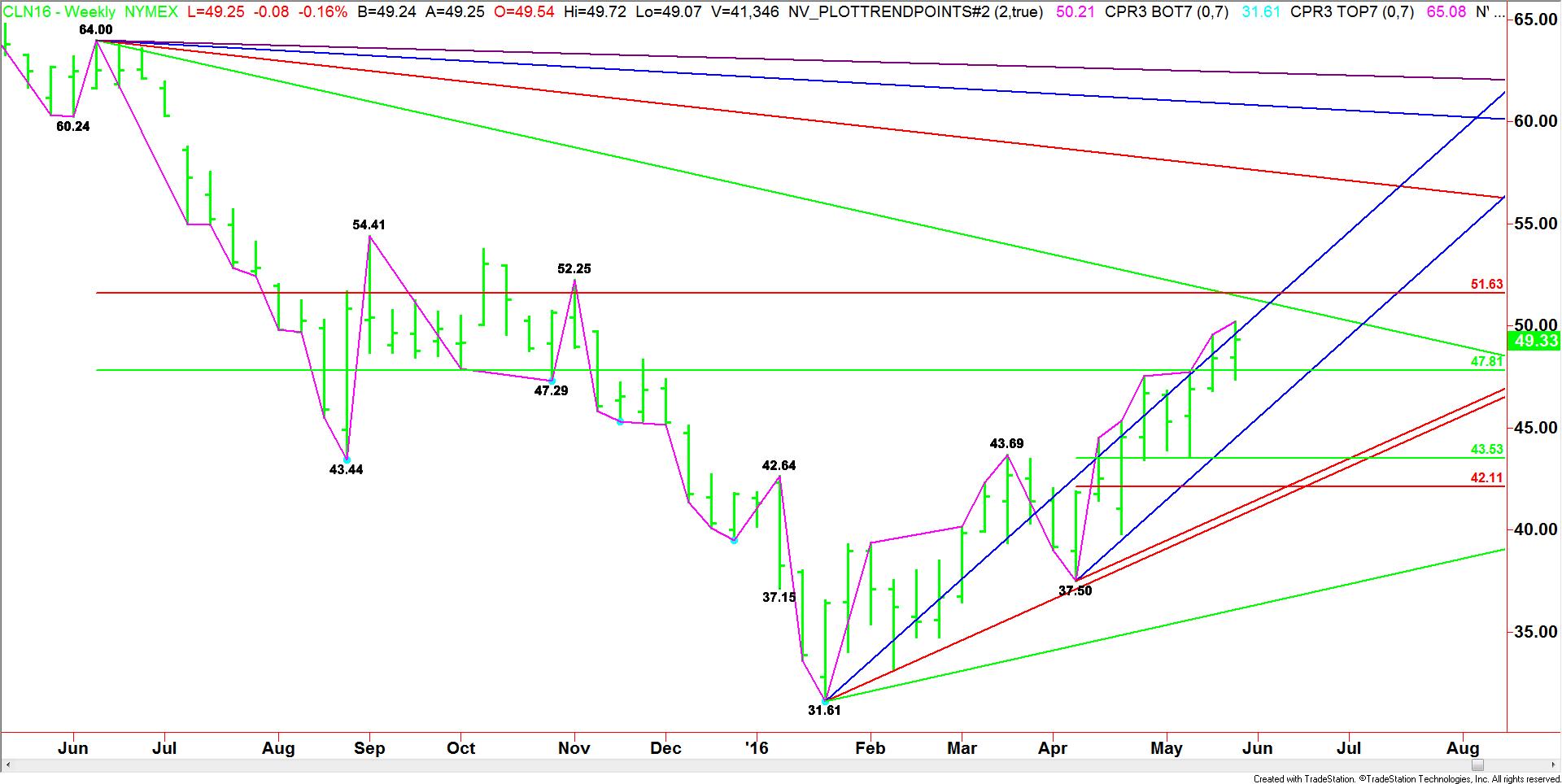 Technically, the main trend is up according to the weekly swing chart. The market is not in a position to change the main trend to down, but it is in the window of time to form a potentially bearish closing price reversal top.

Time will also be important this week because this current rally from $37.50 will be up 8 weeks. The last rally from $31.61 to $43.69 ended after 8 weeks. Markets often top when time balances.

The main range is $64.00 to $31.61. Its retracement zone is $47.81 to $51.63. The market is currently trading inside this zone. Long investors often take profits inside major retracement zones and aggressive counter-trend traders often start shorting a market. Combining these tendencies with the time factors mentioned earlier builds a strong case for a near term top.

Two Gann angles come into play this week. The first is a steep uptrending angle at $50.61. The second is a long-term downtrending angle at $51.25. These angles combine with the Fibonacci level at $51.63 to form a major price cluster. All are capable of stopping the rally.

The inability to overcome the angle at $50.61 will be the first sign of weakness. This angle has guided the market higher since the week ending January 22. It is moving up at a rate of $1.00 per week. Trading below it will indicate a loss of upside momentum.

Overcoming $50.61 will put the market on the bullish side of the uptrending angle. Overtaking the Fibonacci level at $51.63 with conviction will mean the market has turned extremely bullish.

With price and time setting up nicely this week, I’ll be betting on the short side if I start to see increased selling volume. I’m not going to step in front of the rally and try to pick a top, but I will be looking for signs of selling pressure such as strong reactions off resistance levels, a lower-low higher close on the daily or weekly charts and the taking out of key support levels like the main 50% level at $47.81.

The inability of the headline writers to get the market right and the closing price reversal top on May 26 may mean we have already seen the top. In this case, you’re going to have to be willing to sell weakness this week. This could pay off over the short-run because the next downside objective is $43.53 to $42.11. The timing for a move into this zone is only two weeks.

Crude Oil Retreats After Reaching 'Magic' Number
James A. Hyerczyk is a financial analyst for FX Empire, a leading financial portal. James has worked as a fundamental and technical financial market analyst since 1982. His technical work features the pattern, price and time analysis techniques of W.D. Gann.
wpDiscuz