The Organization for Economic Cooperation and Development (OECD) gave an interim update to its bi-annual forecasts covering the world’s major economies. The underlying point from the latest update is that the OECD foresees lower growth rates in almost all of the world’s seven major economies.

The OECD’s projected growth in the Eurozone is to reach a maximum of 0.8% in 2014 and 1.1% in 2015. Their previous estimates for the region published in May 2014, forecast a growth rate of 1.2% in 2014 and 1.7% in 2015. The ECB recently cut the cost of borrowing to near zero and plans to implement a banking union over the next two years. The OECD supports these measures and recommends that the ECB goes further in their monetary policy stance.

The OECD said that Eurozone inflation is at a 5-year low of 0.4% and should strengthen as demand recovers, although price inflation remains at low levels close to zero putting the trading bloc at risk of deflation. “Given the low-growth outlook and the risk that demand could be further sapped if inflation remains near zero, or even turns negative, the OECD recommends more monetary support for the euro area,” the organization said in a statement published alongside the interim forecast. 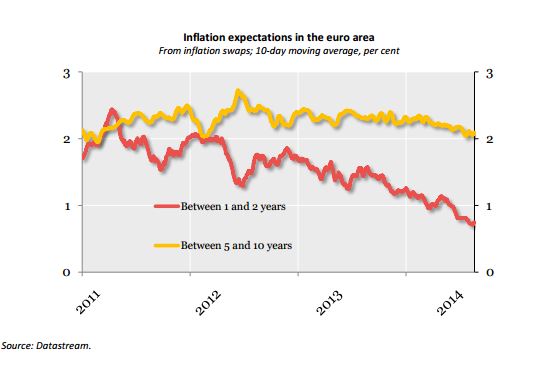 The largest recalibration was for Italy. The OECD expects Italy’s economy to contract by 0.4% in 2014, having estimated it would grow by 0.5% in May.

“The global recovery from the crisis has been inadequate in several ways,” the OECD said. “Economic slack has persisted, potential growth has slowed, and inequality has risen. Meanwhile, external imbalances and threats to financial stability have remained.”

As previously postulated by Forex Magnates, the OECD believes monetary policies in the major economies are set to diverge, with the Fed and the Bank of England (BoE) ending their easing policies at a time when the European Central Bank (ECB) may have to provide even more stimulus. A large component and causal factor for the divergence is changing employment conditions. Despite corporate resilience and stock market strength, employment conditions remain anaemic across most developed countries and are struggling to recover at a rapid pace. This is worrying central bankers and legislators alike. 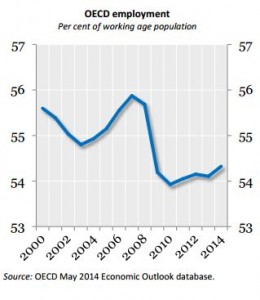 The OECD supports greater policy accommodation across the board and has publicly given support for outright bond purchases in similar vein to the Fed, BoE, SNB and BoJ in the Eurozone. “Recent ECB action is welcome but further measures, including quantitative easing, are warranted,” said Rintaro Tamaki, the OECD’s Chief Economist.

The OECD sees dovish monetary policy as most suitable in Japan too, saying that additional stimulus will be required when a second planned increase in sales tax occurs in 2015.

With Scotland’s independence vote grabbing attention and headlines around the world, the OECD also weighed in with their stance saying it would prefer the 307-year old union to be maintained. “We clearly believe that better together is the way to go,” said OECD Secretary General Ángel Gurria. “The U.K. is an important member of the OECD, and we would like to see it remain together, we think that would be best for all its component parts,” he added.