According to regulatory filings dated April 2, 2014, filed by Gain Capital Holding Inc. under form 4 with the SEC, the firm’s CEO, Glen Stevens has cashed in on 11.2% or 84,600 shares of his holdings of the company’s publicly traded stock under ticker symbol GCAP on the New York Stock Exchange.

Mr. Steven still owns 676,482 shares of the company according to the filing, where he is listed as President, CEO & Director, and the above reported unloading of 84,600 shares was reported as having been made as early as March 31, 2014, the last day before the close of the first quarter. The transactions took place between the prices of $10.9295 and $11.1347, according to the filings.

Based on yesterday’s closing price of GCAP at roughly $11.02, the remaining shares that Mr. Stevens still beneficially owns can be estimated to be worth $7,388,711, after he cashed in just shy of one million dollars worth of stock or $937,481, based on the volume weighted average prices listed above from the filings. 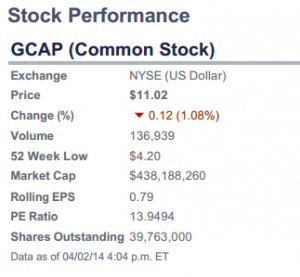 The sales were done pursuant to a company sales plan that permits such trades and complies with the requirements of Rule 10b5-1(c) under the Securities Exchange Act of 1934.

Therefore, while it’s not clear as to the reason the overall position was reduced, it appears that it could be profit taking or the proceeds were needed for a personal investment or related matters.

After all the benefits of owning shares in your own public company (or someone else’s company) is benefiting from an increase in their value over time, whereas when executives start selling large percentages it can also be revealing of changes that are to come. Just yesterday, Forex Magnates reported when SafeCharge, a payments company that caters to Forex companies among others, successfully launched their IPO in London.

Forex Magnates reported when Gain Capital released their Annual Report for 2013 earlier last month, as well as the firm’s February volumes a few weeks before.

An excerpt of the Yahoo Finance chart below shows the price history of GCAP shares, which have reversed the downtrend at the end of 2013, with 2014 proving to be a bullish start.

The man understands when what a lower high leads to – (I kid, I kid).