SafeCharge, the payments solutions provider specializing in Forex brokers and online gambling sites, formally launched its shares for trading today with an initial public offering (IPO) which raised new equity capital for the company to the sum of $125 million.

The valuation and the performance of the SafeCharge stock is likely to be compared from now on with that of Optimal Payments Plc (LON:OPAY) which operates the competing payment solution NETELLER and has a market capitalization of about US$600 million.

The underwriter for the IPO is Shore Capital which is acting as nominated adviser and broker to SafeCharge.

Before the IPO, the gambling software tycoon, Teddy Sagi, held 97.1% of the shares of SafeCharge founded in 2006 by its ongoing Chief Executive Officer, David Avgi, who owned the remaining 2.9%. After the IPO, JPMorgan Asset Management (UK) Ltd. owns 6.25% of SafeCharge and Henderson Global Investors owns 5% of it.

The LSE AIM listing which created a free float of about 31% diluted Mr. Sagi’s stake to 66% of SafeCharge. Mr. Sagi became a billionaire after listing the gaming company which he founded, Playtech, on the London Stock Exchange in 2006 (LSE:PTEC).

SafeCharge stated that its business strategy is to leverage its current position in the global online payments market to drive growth while capitalizing upon new opportunities, such as a digital wallet which is expected to be launched in Q4 2014 and the Group’s recently attained merchant acquirer status with MasterCard Europe. The company intends to acquire competitor payment service providers to extend the Group’s reach further into Asia-Pacific and the Americas.

Mr. Avgi, the firm’s CEO, commented on today’s announcement saying: “We are delighted with SafeCharge’s IPO and successful admission to AIM. The substantial over demand from high quality institutional investors is a strong endorsement of our business model and investment proposition. The proceeds of the Placing will be deployed to accelerate the Company’s growth strategy both through acquisition and organic means. Furthermore the Board believes that the listing on AIM will improve the Group’s profile in attracting prospective clients.” 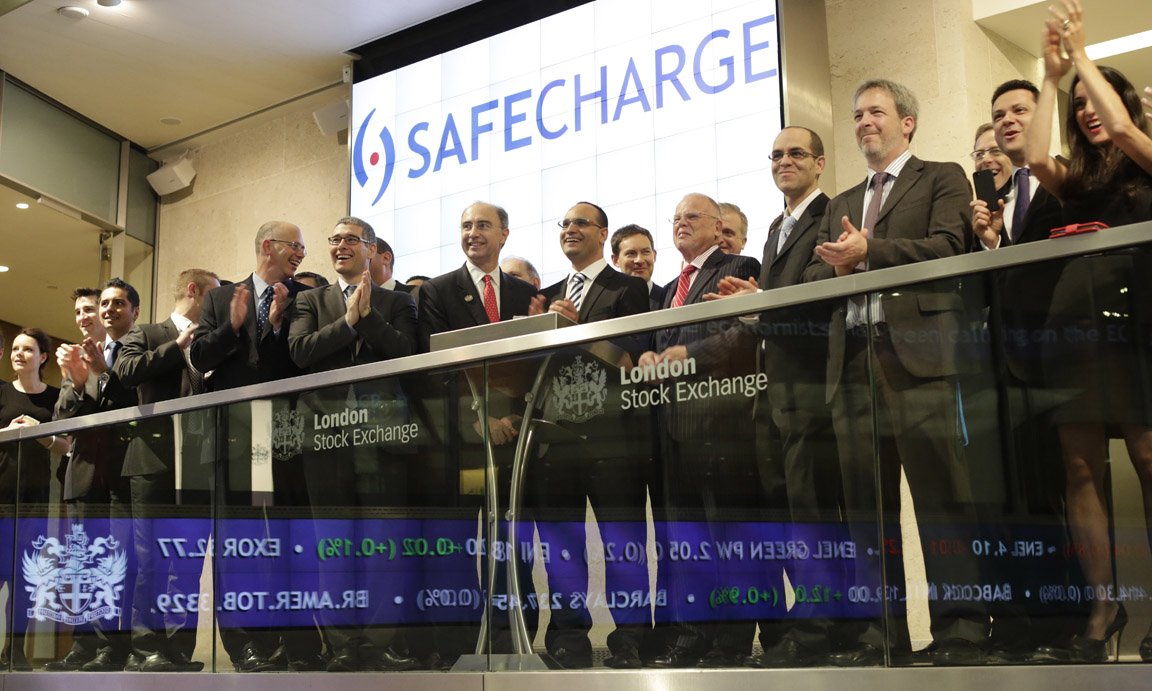 SafeCharge received the “Most Innovative Financial Product Award‏” in November of last year at the Forex Magnates London Summit 2013. According to SafeCharge, it is a payment partner across a diversified, blue chip client base. The group is a supplier to merchants in the regulated European sports betting and gaming industry, retail securities derivatives and FX trading sector, as well as enjoying a presence in digital goods and services. The Group has over 500 active clients with notable examples being: Gala Coral, Rank Digital Gaming, William Hill and FXPro.

In additional to this story, Forex Magnates has learned from industry sources that Safecap (Markets.com) is also aiming for an IPO within the next twelve months from now, supposedly for a similar valuation.