US retail forex traders were less profitable in the first quarter of 2016 than at the end of 2015. During Q1, 35 per cent of traders were successful on a weighted average basis compared to 37.4 per cent in Q4 2015. Non-weighted calculations showed average client profitability of 32.5 per cent which was a 2.5 per cent decrease from the 35 per cent figure in previous calculation period.

While profitability levels fell, traders flocked back into the market and opened new trading accounts. The number of active US retail forex trader accounts stood at 94,016 in Q1 2016. The figure is a rebound from multiyear lows registered in Q4 2015, when MB Trading exited the U.S. market and was acquired by TradeKing in August last year. Compared to Q4 2015 the total number of accounts increased by 5.1 per cent (or 4,538). The numbers are matching the metrics from Q3 2015 when the total of US retail clients accounts with the brokerage was 94,031.

In terms of performance by the brokerage, clients of Interactive Brokers continued to be the most savvy, once again leading traders at other brokers in terms of profitability. However, compared to the last quarter of 2015 profitability dropped approximately 1 per cent to 44 per cent, while the number of accounts fell to 32,371 (-1.8 per cent lower).

Clients of all other brokerages noted a period of lower profitability with the figures at GAIN Capital dropping the most. As is typical for retail traders, periods of higher volatility result in diminished profitability. Clients of FXCM, IBFX/TradeStation and OANDA have also registered a quarterly decline in their results, albeit to a lesser extent.

Looking at account numbers only Interactive Brokers and IBFX/TradeStation reported decreases with the totals dropping by 585 and 125 accounts respectively. The rest of US brokers registered an increase in active trading accounts with OANDA, FXCM and GAIN Capital adding 2,602, 1,620 and 1,026 accounts. 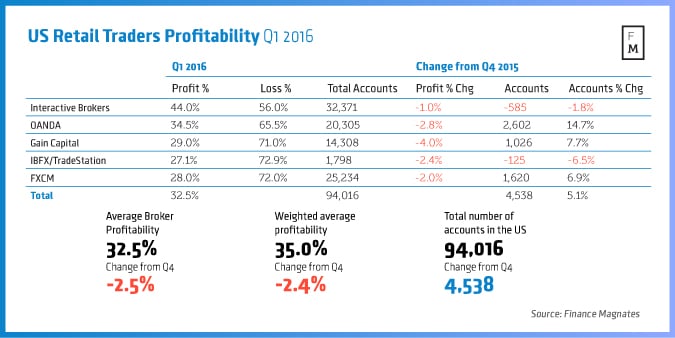 Overall, the first quarter of 2016 was dominated by increased market volatility. The Chinese markets meltdown coupled with the volatility in commodities markets has resulted in a number of unexpected moves. The Bank of Japan, the U.S. Federal Reserve and the European Central Bank have also provided some unexpected rhetoric and monetary policy decisions.

Earlier profitability reports have shown that retail traders have been more successful during low volatility periods. In slower markets, resistance and support levels are usually stronger and the price move more technical. Higher volatility disturbs that golden rule and leads to deepening losses and decreasing profitability.