Updated: Interactive Brokers and Citi updated their numbers, with IB’s number of accounts being different by more than 6k from the previous report so instead of rewriting the post we are posting both the New and the Previous tables. 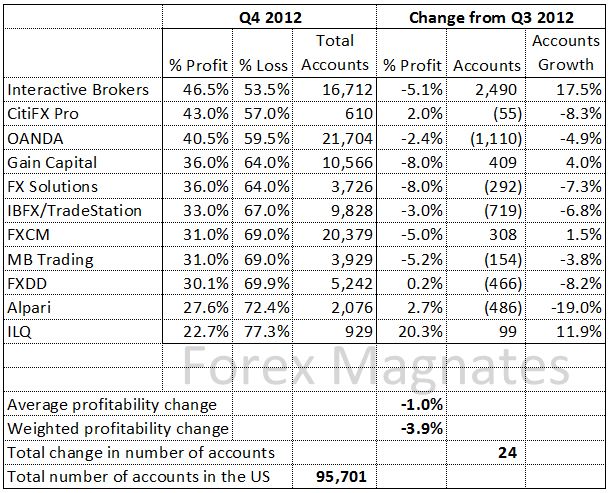 Q4 2012 was the 3rd quarter in a row in which the number of US retail forex traders declined. In Q1 2012 the number of traders technically grew by meagre 120 accounts – and this was probably due to Interactive Brokers calculating the number of accounts not according to NFA’s requirements (this changed in Q2). Discarding this error – since the beginning of profitability numbers being published the number of US forex traders grew only in three quarters: +111 in Q3 2011, +621 in Q1 2011 and +657 in Q4 2010.

The change in number of accounts since the beginning (Q3 2010) is difficult to accurately calculate since brokers often reported differently to NFA’s requirements (OANDA and IB) or have changed their numbers slightly after publishing (shall we call this forex backdating?) and some brokers came (IB, ILQ) while many more left (PFG, GFT, Forex Club, Advanced Markets and IG Markets). However if calculating these changes while factoring in the known differences we can see that the number of accounts dropped from 110,000 in Q4 2010 to less than 90,000 two years later. That’s close to 20% drop.

The number of US forex brokers plummeted as well: PFG, GFT, Forex Club, Advanced Markets, IG Markets, Easy Forex and dbFX were here two years ago but have since either collapsed (PFG) or simply exited the US forex market as the NFA made it increasingly difficult for brokers to stay competitive.

18 brokers were accepting US traders 2 years ago, now there are only 11 which equals to staggering 33% drop. It doesn’t take a genius to predict that two years from now there will be only a handful of US forex brokers left to continue this report, if at all.

US forex traders profitability in Q4 2012: 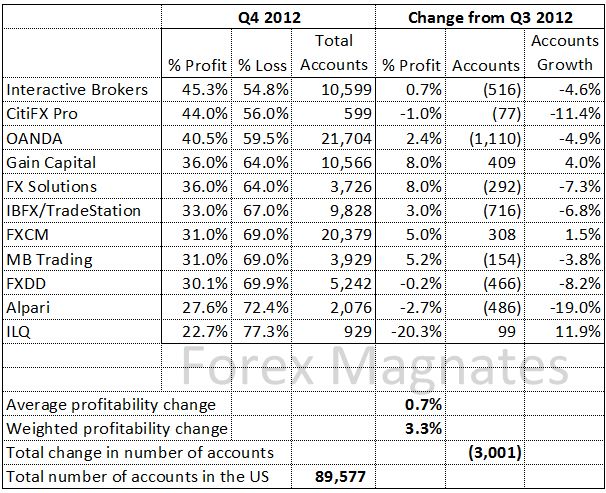 I think ILQ is next on NFA’s extermination list. If you read the complaints against them(also in the ATC case) on the NFA database, the language makes it clear that they don’t have much love at all for this firm.

my money on them staying longer than others, they got several former nfa employees working for them = untouchable

I’ve heard rumblings from traders that MB Trading might be one of the next to fall. Any thoughts on them?

you can say the same on any small broker such as FX Solutions, MB Trading, Alpari US, etc. It’s hard to tell who’s next, unfortunately however someone is going to be next.

How would one explain such big differences between the first and the last in this table? The jump from 22.7 to 45.3 is more than a doubling. What could be the reasons?

When we consider the largest broker alone in Japan has more than 300,000 accounts (IIRC) it blows the mind that the US market can be so stunted like this, even accounting for a preference for stocks in the US compared with Japan.

Japan is normally the primary regulatory nightmare but sure seems the US takes the cake where FX is concerned. Thankfully there is a global market.

simple: 1. there are big differences between brokers, depending on spreads, commissions, specific months, etc 2. ILQ is much smaller than IB so any change in one account impacts the overall result much more than with IB

MB Trading falling out of the retail forex market? I doubt it. Not anytime soon. I see them weathering the storm for at least the next 2-3 years, unless NFA does something drastic that it hasn’t already done.

it does drastic things all the time..

Can’t imagine FXCM is also there.