2018 saw a suite of changes to the retail trading industry in the European Union (EU) after the European Securities and Markets Authority (ESMA) implemented its product intervention measures. While European brokers have suffered, other jurisdictions have benefited from these changes, and one of them just might be Switzerland.

Switzerland is well-known for a number of things – the Alps, cheese, being a tax haven and chocolate. But what about the country’s foreign exchange (forex) market?

In the country, brokers need to have a banking license in order to operate. The banking status in Switzerland is a demanding regulatory regime, and it requires a minimum capital of CHF 20 million and a solid organization.

This is in comparison to other jurisdictions which have much lower requirements starting from €100,000 to the low millions, such as the European Union (EU). Switzerland’s requirements are similar to that of the United States, which requires brokers to have a minimum of $20 million on its balance sheet at any given time.

This means there are only a few Switzerland-based brokers, and only two which still accept retail traders from Europe – Swissquote and Dukascopy. According to Finance Magnates Intelligence, Swissquote is the leading broker in the country. Aside from Dukascopy and Swissquote, IG Group and Saxo Bank also have a local presence with offices.

Speaking to Finance Magnates, Elena Christodoulou, Regional Manager – German-speaking countries at Tickmill said: “Although Switzerland is popular for being a hub for asset management companies, due to the taxation structure, it is also one of the biggest Forex Trading Centers in the world.

“The FX market in Switzerland is already well developed, with a strong FINMA regulation. Compared to the amount of FCA or ASIC regulated brokers though, the options for traders choose between Swiss regulated Broker are very limited.”

Switzerland is in a unique position. Although it is not part of the EU, it is still very close. As Finance Magnates has analyzed, since ESMA’s regulations, retail traders have been looking offshore for jurisdictions that offer higher leverage.

Switzerland is one of those jurisdictions. Take Swissquote, for example, which offers standard leverage of 1:100 for FX trading, which can be customized on request. This is compared to ESMA’s rules which limits leverage to 1:30 for CFDs on major FX pairs and 1:20 for non-major currency pairs.

So are retail traders moving to Switzerland? In general, brokers are largely hesitant to reveal the exact demographics of their clients. However, taking a look at Swissquote data, since ESMA’s measures were implemented in the third quarter of 2018, the broker has seen a solid uptick in its global trading volumes and overall active accounts. 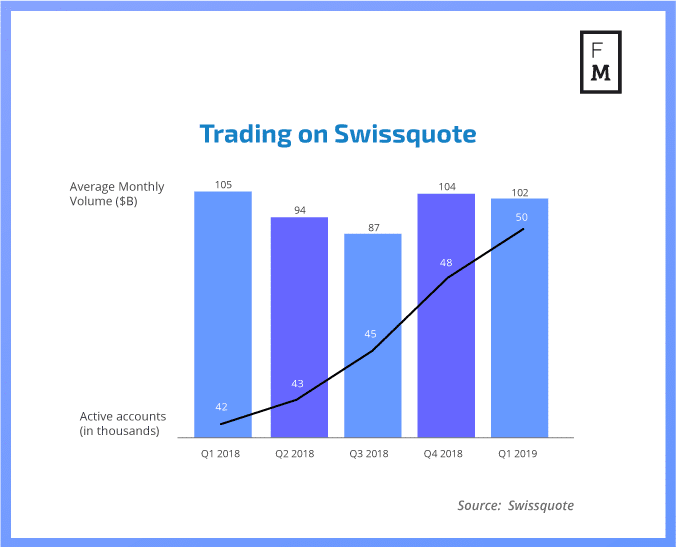 European brokers, on the other hand, have been showing the reverse and have overall reported a drop in both trading volumes and client activity, which was further weighed down by low volatility.

Can Switzerland thank ESMA for the FX boost?

Whether Swissquote’s results are due to EU traders moving to trade with the Swiss broker is purely speculation at this point. Finance Magnates did reach out to the company, but as of the time of publishing, we have not yet received a response.

Taking a look at forex trading across the whole of the forex market, the same patterns emerge. According to Finance Magnates Intelligence and estimations, after the third quarter of 2018, there was a noticeable surge in trading volumes and active accounts in the country. 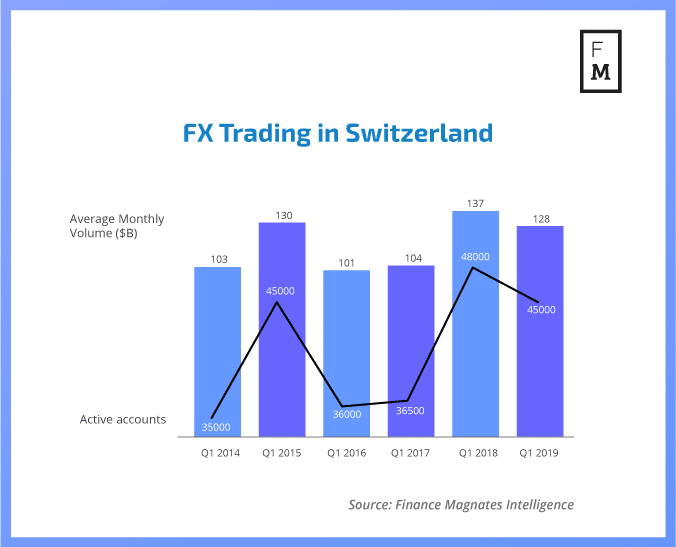 “Obviously the product intervention measures that were implemented by the European Securities and Markets Authority in August, had an impact on the dynamics of the industry,” added Christodoulou.

“Traders who were interested to trade with a higher leverage started to look for options outside the EU. Whether now this has benefitted Switzerland directly, it is questionable, as there are also alternatives to Switzerland and additional aspects need to be taken into consideration. Among others this can be the minimum deposit amount and the trading conditions/costs.”

In terms of traders, Switzerland is similar to many countries. Overall, investors prefer to trade the majors as well as Japanese yen (JPY) pairs and Gold. In terms of risk appetite, they are largely sophisticated algorithmic traders, with moderate risk appetite, Christodoulou noted.

As to what the future holds for Switzerland, she had this to say: “Disregarding the factors that are impacting the market in general (e.g. interest and inflation rates) it will be very interesting to see the development in Switzerland.

“In case there will be no regulatory changes, as we saw in Europe, there might be an increase of brokers obtaining the Swiss regulation. More competition in the market could have a strong impact on the trading conditions, which clients could benefit from.”